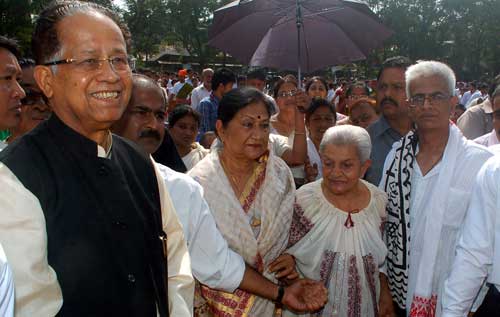 In a statement Gogoi said that PM Modi’s Maan Ki Baat radio programme on Oct 25 did not articulate the strong resentment brewing in the country in the backdrop of incidents of violence laced with communal and casteist overtones.

“PM Modi’s Maan Ki Baat failed to send a strong message in the backdrop of volatile situation prevailing in the country with incidents of intolerance and hatred on the rise,” Gogoi said.

The Assam CM said that PM Modi, who is vocal and decisive in taking quick decisions, shows no signs of alacrity and urgency to rein in the growing incidents of intolerance and hatred that pervade the atmosphere of the country.

“There was no sense of urgency in PM Modi’s message, as he did not spell out the line of action to contain the inimical forces that threaten to bring about discord in diversity,” Gogoi asserted.

Gogoi said that when certain forces are trying to impose will on others fraught with dangerous implications for the country, the Prime Minister did not underscore the need to forge in unity to promote diversity.

The Assam CM said that he failed to comprehend as to why the present dispensation at the Centre did not convene a meeting of the National Integration Council to discuss the volatile situation in the country and for adopting pragmatic and effective measures to tide over the situation.

“If it is not a proper time to call for a meeting of National Integration Council, then when will the time come?” Gogoi wondered.