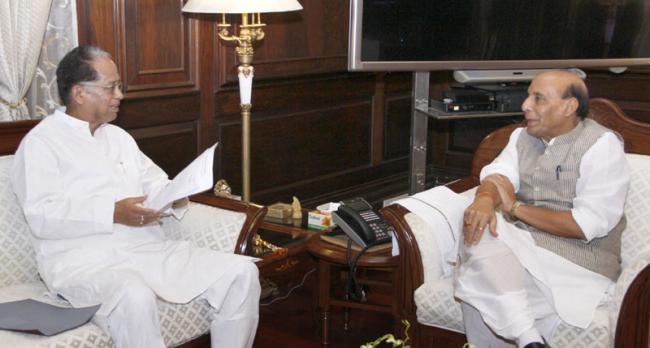 Assam Chief Minister Tarun Gogoi  on Thursday met Union Home Minister Rajnath Singh at his North Block office in New Delhi and made a plea for immediate financial assistance for Rs.500 crore to Assam for carrying out relief, rehabilitation and restoration of communication.

Giving a detailed account of the substantial damages caused by floods to human lives, cattle, crops, infrastructure and other properties, Gogoi said that, the current fourth wave of flood has affected 19 districts, the worst being Kokrajhar, Dhubri, Bongaigaon, Chirang, Barpeta and Goalpara.

“Around 8.5 lakh people of more than 1400 villages had to bear the brunt of flood. We had to set up nearly 300 relief camps for about 2 lakh people evacuated from the flood affected villages. Flood has claimed 27 human lives so far,” Gogoi said.

Gogoi apprised Singh about the extensive damages to embankments with breaches at 28 locations.

The Assam CM informed the Union Home Minister that preliminary assessment conducted by the State Water Resources Department revealed that an amount of Rs.63 crore would be required for plugging the breaches to the embankments and Rs.200 crore for restoration of critically damaged flood management structures.

Gogoi told the Union Home Minister that preliminary assessment of the flood damages has been going on and the final report detailing the damages would be submitted to the Ministry when the flood waters recede.

“Detailed assessment of losses to infrastructure, crops and properties has been initiated and detailed memorandum will be submitted shortly. The State Government, however, needs immediate financial assistance to the tune of Rs. 500 crore to meet the challenges of relief, rehabilitation and restoration,” the Assam CM said.

Gogoi also requested Singh to clear the committed liabilities made by the Central Government to the damages caused by flood last year to the tune of Rs. 2485.13 crore to undertake immediate restoration and rehabilitation measures for flood affected areas.

The Assam CM further pointed out that though the inter-ministerial team had recommended an amount of Rs.414.393 crore, the Government of India had sanctioned Rs.387.20 crore only under National Disaster Response Fund (NDRF).

Gogoi requested Singh to release Rs. 887.20 crore that includes Rs.500 crore as financial assistance and Rs.387 crore under NDRF at the earliest to help the State cope with the emergent situation.

The Union Home Minister assured the Chief Minister that the demands of the State Government would be under the active consideration of the Central Government.

Commissioner and Secretary, Home and Political of Assam government LS Changsan was also present during the discussion.