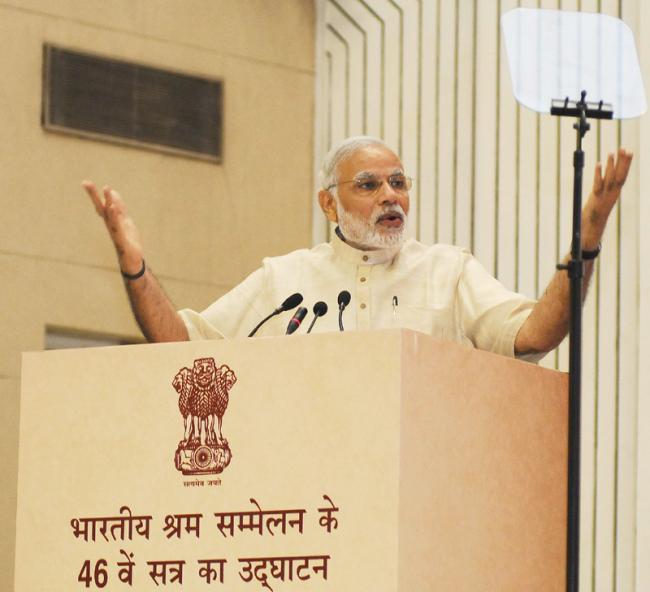 Indian society should develop a conciseness towards dignity of labour: PM Modi

He made the remark while addressing the inaugural session of the Indian Labour Conference in New Delhi.

The Prime Minister said in Indian culture, the worker is traditionally regarded as "Vishwakarma."

"The country cannot be happy, if the worker is unhappy," the Prime Minister added.

Emphasizing that laws alone would not bring about the desired objective, PM Narendra Modi said it was the combined effort of the labour unions, the industrialists and the government, which would lead to results which were in the interest of the nation's economy.

The Prime Minister said successful examples of this kind are worth emulation.

He said every effort would be made to modify laws through consensus.

As part of the concept of "Minimum Government, Maximum Governance," Modi said obsolete and unnecessary laws were being weeded out.

The Prime Minister called for giving importance to innovation among the workers.

He asked how many industrialists had encouraged innovative workers to become entrepreneurs.

In this context he recalled the recognition that had been given to innovators in the Indian Army, on the previous Army Day.

He said Labour Unions too should join in the effort to nurture innovation.

The Prime Minister said 4.67 crore workers now have a portable Provident Fund Account, through a Universal Account Number, which connects them to an online network. He also mentioned other welfare initiatives of the Government, such as raising minimum pension to Rs. 1000.

The function also marked the launch of the National Career Service Portal, and ESIC 2.0: reform initiatives of the ESIC.