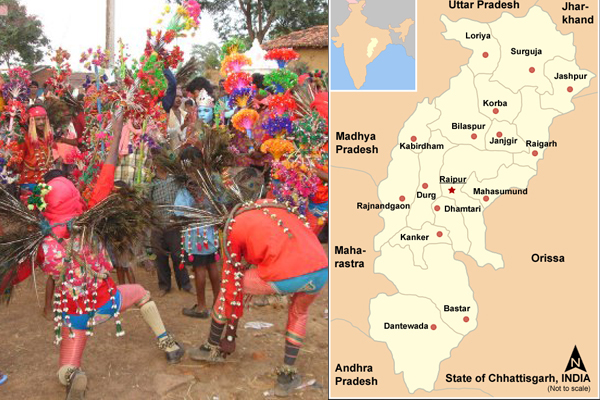 By Fakir Mohan Pradhan | | 03 Mar 2015, 11:27 am
#Chhattisgarh, # Counter-offensive amidst Losses
Research Associate, Institute for Conflict Management Continuing the momentum after the December 1, 2014, Kasalpar [Sukma] attack on Security Forces (SFs), in which 14 Central Reserve Police Force (CRPF) personnel, including two officers, were killed, Communist Party of India-Maoist (CPI-Maoist) cadres killed at least seven civilians in six incidents, and 10 SF personnel in nine incidents, while losing just three cadres in two incidents, as of February 25, 2015, in Chhattisgarh. Interestingly, there has not been a single major incident [resulting in a total of three or more casualties] in this period, indicating that the Maoists are going about their business steadily, without drawing much attention to themselves.

On January 1, 2015, Maoists killed a top surrendered Maoist, Korsa Jagaram akaShivaji, in Kottapal village, Bijapur District. Shivaji, a native of Silger in Sukma, was a member of the West Bastar Division Committee of the CPI-Maoist and carried a reward of INR 900,000 before his surrender. He was recruited as a Gopniya Sainik(secret informer) by the Bijapur Police after his surrender. Due to his involvement in several prominent attacks on the security forces and proximity to top Maoists, he was a major intelligence source for the Police. "His death is a major loss for us," an unnamed officer conceded.

Further, in what appeared to be a planted intelligence trap, the Maoists ambushed a joint party of the District Police and Border Security Force (BSF) near the Bande area of Kanker District on February 2, 2015, killing Bande Station House Officer (SHO) Avinash Sharma and Gopniya Sainik (secret agent) Sonu Ram Gawde, while injuring another six SF personnel - three each from the Police and BSF. While all the personnel were on motorcycles, at least Sharma and Gawde were in formals rather than fatigues, indicating that they were not expecting an armed engagement at all. The incident assumed significance as Kanker had not reported the death of any SF personnel in Maoist attacks through 2014.

Significantly, the number of SF personnel killed in Chhattisgarh is disproportionately high, in comparison to other Maoist-affected States. According to SATP data, in 2014 Chhattisgarh alone accounted for 55 SF fatalities, out of a total of 87 in all States. In 2013, Chhattisgarh accounted for a much lower 45 out of 111 SF fatalities in all States, with Jharkhand and Bihar accounting for 26 and 25 fatalities, respectively. The SF to Maoist fatality ratio is also exceptionally adverse and worsening, at 1.7:1 in 2014, as against 1.29:1 in 2013.

It is clear that Chhattisgarh remains the nerve centre of Maoist movement and functions as the locus of their 'tactical counter offensive' campaigns. District-level fatalities data further indicates that almost all fatalities in Chhattisgarh have been restricted to the Bastar Division - comprising Sukma, Bijapur, Dantewada, Bastar, Kondagaon, Narayanpur and Kanker Districts. The only exception is Rajnandgaon District (two fatalities), which shares its border with Gadchiroli in Maharashtra.

Chhattisgarh recorded 11 major incidents through 2014, in which SFs suffered principal losses in five; the Maoists suffered principal losses in another five; while civilians (polling officials) bore the brunt in one incident when Maoists mistook them for SF personnel. The Maoists lost 15 cadres in these incidents, while SFs lost 43 personnel, indicating that the Maoist retaliation was much stronger. It is clear, moreover, that despite assessments of significant weakening of the rebel Forces and leadership - judgments that have been confirmed by internal appraisals by the Maoists -, the Maoists still retain sufficient residual strength to sustain their counter-offensive.

While Maoist-Police encounters as well as attacks on the Police have increased in frequency, a range of other parameters remain more or less comparable over 2013-2014. Significantly, the number of surrenders of Maoist cadres has also risen sharply.

Similarly, there have been important surrenders in the State as well, within the context of a wider wave of surrenders. There have, however, been some apprehensions regarding the quality of surrenders, with allegations that the overwhelming numbers are comprised of sympathisers or others only peripherally connected - in some cases allegedly unconnected - with the Maoists. These apprehensions notwithstanding, the surrenders include high profile Maoists including Chambala Ravinder aka Arjun, reportedly the 'commander' of the '2nd Battalion' of the People's Liberation Guerilla Army (PLGA), suggesting a measure of discontent within the rebel leadership.

Despite the erosion in popular support, the Maoists continue to exercise considerable 'power' in the Bastar region. Thus, on January 9, 2015, some 130 Sarpanch (elected heads of village self-government bodies) candidates were herded by Maoists into the core forest area near the Gonguda Hill range in Sukma District with the assurance that they would be released after a meeting with senior Maoists. The candidates were held hostage till January 15, when CPI-Maoist 'divisional committee' member Jaggu, along with Kerlapal 'area committee 'commander' Bhime aka Reena, and armed cadres, finally reached there to warn them against participating in the elections.

In the Panchayat elections eventually held in four phases between January 28, 2015 and February 10, 2015, of 22,416 panches (village representatives) elected in the seven Districts of the Bastar Division, nearly 50 per cent, or 11,098 candidates, won unopposed, presumably as a result of pressure from the Maoists on other candidates not to contest. 212 sarpanchs also won unopposed. At least 90 per cent of these, the Chhattisgarh Police claimed, either had links with the Maoists or were supported by them. The maximum presence of Maoist-backed representatives was in the Narayanpur, Dantewada, Bijapur and Sukma Districts of Bastar Division, where, out of a total 6,963 panches, 5,186 (75 per cent) won unopposed. Of 1,107 panches in Narayanpur, 938 were elected unopposed. Of 2,169 panches in Bijapur, 1,785 were elected unopposed, while 1,335 of 1,709 panches in Dantewada, and 1,128 of 1,978panches in Sukma won unopposed. With various Government schemes worth at least INR10 billion annually, implemented through the panchayats, preventing leakages to the Maoists will be an uphill task, as hardly any officer is likely to visit interior areas to audit the actual implementation of works and expenditure. An officer who has worked in the area commented: "Collectors are strictly asked to not travel beyond a point. Who will monitor the schemes? We have to rely on these panch only." Ironically, according to media reports, Dantewada District won the award for best implementation of MNREGA, when the panchayat polls were on.

The response from the political establishment to the Maoist insurgency has failed to go beyond posturing and rhetoric. Even as Maoists killed a Special Task Force trooper in the Gadiras area and a secret police agent in Konta town, both of Sukma District], and derailed a goods train engine at the Kamalur Station in Dantewada District on February 19, 2015, Chief Minister Raman Singh tweeted, "Our gallant police jawans (troopers) and their sacrifices have brought us closer to the end of Naxalism."

In a candid interview, Dilip Trivedi, the outgoing Director General of the CRPF,observed, on November 27, 2014, "For some States, continuing Naxal violence is beneficial. It helps them get central funds. And then it's not their men who die but those from outside the State (central force personnel)." Sources indicate that Trivedi was pointing to Chhattisgarh, Jharkhand and Odisha. It remains the case that, despite the training of over 22,000 Chhattisgarh Police personnel at the Counter Insurgency and Jungle Warfare College at Kanker, the overwhelming proportion of the anti-Maoist fighting continues to be done by Central Forces, whose total deployment in Chhattisgarh amounts to some 31 Battalions, with each battalion yielding approximately 400 personnel on the ground - that is, barely 12,400 Central Paramilitary Force (CPMF) personnel. The highly affected Bastar Division alone covers nearly 40,000 square kilometres.

A political establishment that is in power in the Chhattisgarh for the third consecutive term still leaves too much to be desired even in terms of basic governance. The condition in Maoist-affected areas remains distressing. According to media reports, data provided by Sukma, Bijapur and Dantewada Districts to UMHA indicates that these three Districts have only 44 bank and regional rural bank branches, in total. Sukma and Bijapur have just 10 ATMs. Sukma, 13 mobile towers out of 32 are non-functional. It has only four sub-post offices and all 61 branch post offices are non-functional. Bijapur has five sub-post offices and 53 branch post offices but only two of these are functional. Dantewada has six sub post offices and 59 branch post offices, of which nine don't have a single employee, and a total of 50 per cent of all posts are lying vacant. In Bijapur, 14 mobile towers are functional but another 14 sanctioned towers are yet to be installed. In Dantewada, three of 20 mobile towers are non-functional. Governance in Sukma and Bijapur continues to be rudimentary, at best.

The Maoist movement has lost vigour in many other States, and has suffered significant reverses in Chhattisgarh as well. However, the Bastar region of Chhattisgarh remains the nerve centre of the Maoist counter offensive. The Maoists continue to use their depleted manpower and resources with a high measure of ingenuity, even as the state's responses continue to display a lack of coherence and focus.

There is no dearth of evidence to show that determined efforts have succeeded in defeating the Maoists in other theatres and at other times in the history of the movement. India has had several counter-insurgency successes, and after the new National Democratic Alliance (NDA) Government came to power at the Centre, there has been some talk about using the experience and successful counter-insurgency strategies employed in Punjab, Tripura and Andhra Pradesh, to fight the Maoists. Unfortunately, little of this has actually translated into any strategic shift on the ground.

Nevertheless, the Centre has shown its willingness to send more troops into Bastar, and the long-delayed establishment of a base for Unmanned Aerial Vehicle (UAV) operations in Bhilai has now been pushed forward, and a UAV made its first test-reconnaissance from the airstrip in the Bhilai Steel Plant campus on February 27, 2015. The UAV is likely to be connected with certain Strategic locations within months for live inputs.

Increasing pressure from the Centre has, in the past, tended to act overwhelmingly on the Central Forces and organisations engaged in anti-Maoist operations in Chhattisgarh, at least on occasion, with unfortunate consequences. Unless the State Police, with its critical asset of local manpower, takes on its necessary responsibilities in the counter-insurgency operations in the State, successes will remain fitful, and the Maoist potential for resurgence intact.