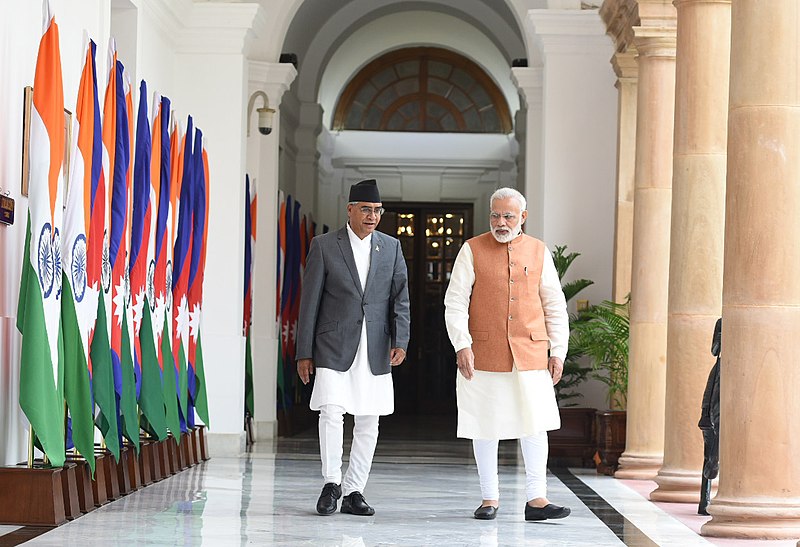 The proposed visit of Nepal’s Prime Minister Sher Bahadur Deuba to India next week is a part of the tradition of periodic high-level exchanges between the two countries.

It would give an opportunity to both sides to review the entire gamut of bilateral relations including development and economic partnership, trade, cooperation in the health sector, power, connectivity, people to people links and other issues of mutual interest.

There is an increasing realization between India and Nepal to expedite the process of energy and broader connectivity cooperation. In India’s “Act East Policy” and “First neighbourhood policy”, energy is the core component.

In the 18th SAARC Summit, it was also emphasized to develop the regional hydro potential, grid connectivity and gas pipelines.

Recently, India and Nepal have signed an agreement to develop the 400KV cross-border power transmission line between Butwal (Nepal) to Gorakhpur (India).

The agreement has paved the way for the construction of a second cross-border transmission line between the two countries which will prove to be the lifeline for Nepal in the area of power trade.

This is important to note that the signing of this agreement was a prerequisite for the implementation of the US Millennium Challenge Corporation (MCC) grant to Nepal, under which Nepal is to receive $500 million for electricity transmission and road infrastructure projects.

We should note that in spite of tremendous Chinese pressure, Nepal’s parliament under leadership of Prime Minister Deuba finally accepted the US grant that paved the way for the implementation of the infrastructure and power projects under the grant.

Earlier, India-Nepal signed an agreement on electric grid connectivity in 2014and also set up a Joint Working Group for planning and identification of cross-border interconnection.

The Power grid, Power Trading Corporations of India and Electricity Authorities of Nepal are constantly working for cooperation in the energy sector.

Further, India and Nepal are working together to build the Kathmandu-Raxaul railway in order to expand connectivity to enhance people-to-people linkages and promote economic growth and development to Nepal.

Both the countries are planning for cross-border railway links, emphasizing the importance of implementing the rail link projects: (a) New Jalpaiguri-Kakarbhitta, (b) Nautanwa-Bhairahawa, and (c) Nepalgunj Road-Nepalgunj.

India and Nepal have moved ahead to prepare a detailed project report for a $3.15 billion broad-gauge rail line project between Kathmandu and Raxaul that will link Nepal's capital with the Indian railway network and provide access to all Indian cities.

Once this railway is constructed, goods can be transported directly to Kathmandu from India and third countries.

Currently, shipments originating overseas are brought to the inland container depot in Birgunj by rail, transferred to Kathmandu and other locations by road.

Both sides also discussed the ongoing works of Jaynagar-Bijalpura-Bardibas, and Jogbani-Biratnagar broad gauge railway lines between India and Nepal, being developed with grant assistance from India.

India and Nepal are mulling over at least five different cross-border railway lines between the two countries.

The technical preparedness of the completed 34-km-long section of the railway line, from Jaynagar (India) to Kurtha (Nepal) for operationalisation of passenger train services was also reviewed.

For Kurtha to Bilajpura (17.25 km) section of the railway line, Nepal assured to provide necessary facilitation for completion of the work at the earliest. Both sides also agreed to expedite the work on completion of the 18.6-km-long Jogbani-Biratnagar rail link, and its early operationalisation.

A Letter of Exchange of Rail service agreement between the two countries has been signed on 9 July 2021.

Now, all cargo train operators can utilize the Indian railway network to carry containers bound to or originating from Nepal whether bilateral freight between Indian and Nepal or third country freight from Indian ports to Nepal.

This arrangement is going to increase efficiency and cost-competitiveness, eventually benefiting the Nepalese consumer.

These new routes will expand Nepal's transit options to the sea. A draft letter for this arrangement was also finalised.

Under the Treaty of Transit in 2015 amendment, India also allowed the movement of vehicles from other countries to Nepal through India.

In a historical cross-border supply, the first transnational fuel pipeline connecting Motihari (India) to Amlekhgunj (later to be extended to Chitwan-Kathmandu) with Rs 3.2 bn support extended by India is operationalized.

It is estimated that Nepal can save over Rs 1 billion annually in transport costs. This is expected to generate additional revenue for the government, reduce technical loss, oil theft and road deterioration, and would make oil supplies cleaner and cheaper.

It is understood that the upcoming visit of Nepal’s PM will give both the countries an opportunity to project their commitment to the development projects that require completion.

India needs to set an example by being proactive in adapting to such change. An expanded set of economic connectivity in Nepal through trade and investment is the pre-condition for political stability and prosperity in Nepal.

The promotion of a politically stable and economically secure periphery is paramount for India.India can help in building gateways and multimodal corridors, which are the building blocks for creating an integrated economic region.