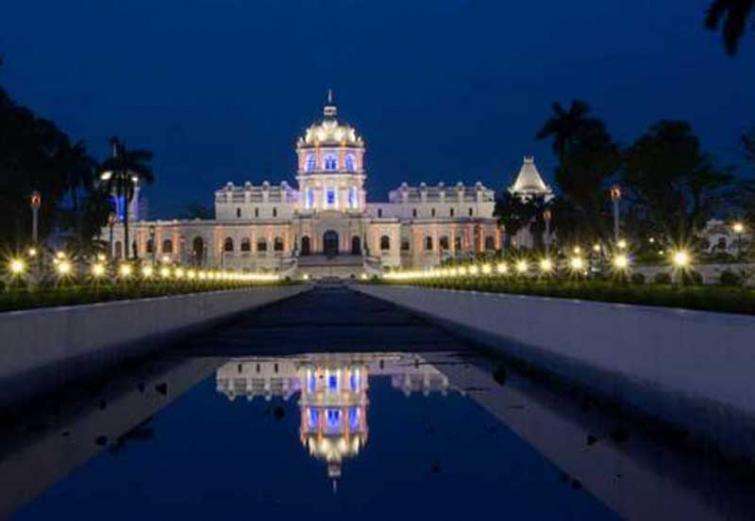 On January 29, 2019, the Indigenous People’s Front of Tripura (IPFT), a Tripura based tribal political party, an ally of the ruling Bharatiya Janta Party (BJP), along with another 10 political parties of the Northeast, met in Guwahati, the capital of neighbouring Assam, to announce their opposition to the Citizenship Amendment Bill (CAB). The other political parties included the Mizo National Front (MNF), the United Democratic Party (UDP), the Asom Gana Parishad (AGP), the Naga Peoples Front (NPF), the National Peoples’ Party (NPP), the National Democratic Progressive Party (NDPP), the Hill State Peoples Party (HSPP) and the Peoples Democratic Front (PDF).

CAB was passed by the Lok Sabha (Lower House of India’s Parliament) on January 8, 2019. The bill is yet to be passed in the Rajya Sabha (Upper House of Parliament).

On January 27, 2019, the head of the erstwhile royal dynasty of Tripura, Pradyot Kishore Manikya Debbarma, criticized the Government over CAB, asserting,

If they try to pass it in the Rajya Sabha or enforce it with an ordinance, we shall show them that we might be a small State but we are less than no one else. People of Tripura would stand with “the country” against politics.

Debbarma was speaking at a protest against CAB, organised by the Tripura United Indigenous People’s Council (TUIPC), a joint body of 48 formerly militant organisations, who had given up violence and whose cadres had surrendered over the past several years.

On January 22, 2019, TUIPC had also announced a series of joint movements in coordination with Tripura-based tribal parties and organizations, to be initiated from January 26, against CAB. Ranjit Debbarma, former ‘chief’ of the All Tripura Tiger Force (ATTF), at one time among the bloodiest insurgent formations in the State, who is the leader of TUIPC, had stated,

We have formed a joint forum called TUIPC with 48 returnee insurgent forums. We vehemently oppose the Citizenship Bill. This Bill violates the conditions agreed in the 1993 ATTF Peace Accord. We seek the Central Government and State Government to respect the peace accord (sic).

Earlier, on January 8, 2019, at least six Tripura Students Federation (TSF) activists were wounded in a clash with the Police during an anti-CAB demonstration at Madhav Bari in the Jirania area of West Tripura District. The protesters were injured when Police baton charged and fired in the air to disperse protesters who were blocking the Assam-Agartala National Highway. One Policeman was also injured in the incident. On the same day, the State Government suspended mobile Internet and SMS services in the entire State for two days, following the clashes. Referring to the incident, the Tripura State Home Department stated,

Incidents of rioting and arson have occurred in some areas in Jirania Police station under West Tripura District and photographs of such incidents are being uploaded in the social media which may be likely to generate serious law and order situation.

Later, on the same day (January 8), the Indigenous Nationalist Party of Tripura (INPT), a Tripura-based tribal political party, along with four other tribal parties, including IPFT-Tipraha group, Twipra State Party (TSP), National Conference of Tripura (NCT), and Tripura People’s Party (TPP), called for a general shutdown on January 12 to protest the incident. No incident of violence was reported during the general shutdown on January 12.

Tripura, like other north-eastern States, has been witnessing agitations after the passing of CAB in the LokSabha on January 8, 2019. The ongoing agitation has the potential to derail the sustained improvement in the security scenario over the past decade in Tripura in particular and the Northeast region at large.

At peak, Tripura experienced the among the highest intensity insurgencies in the country, in proportion to its population, with 514 fatalities (453 civilians, 16 Security Force, SF, personnel, and 45 militants) recorded in 2000, for the then population of about three million. Tripura recorded no insurgency-related fatalities between 2014 and 2018, according to partial data collected by the Institute for Conflict Management (ICM). The last incident of killing in the State was reported on November 17, 2014, when a Border Security Force (BSF) trooper and a civilian driver were killed at Pusparam Para in North Tripura District in an ambush by National Liberation Front of Tripura-Biswamohan Debbarma (NLFT-BM) militants. The three years preceding were also free of fatalities, and low single digit fatalities had been the norm since 2007.

On the other hand, at least five militants surrendered in 2018 in three separate incidents. In a significant incident, on October 10, 2018, three NLFT militants, identified as Trivijoy Tripura, Amrika Tripura, and Kharjumani Tripura, surrendered to BSF officials at Telimuara in Khowai District.

Despite the remarkable operational successes, residual threats still persist in the State. Reports indicate attempts by insurgent groups to regain lost ground. In a recent indicator, on January 3, 2019, the movement of cadres of the Biswamohan Debbarma faction of NLFT (NLFT-BM) was reported along the Tripura-Bangladesh border, in the remote Khantlang area of North Tripura, Gandacherra in the Dhalai District, and Sonamura in the Sipahijala District. Further, according to a NLFT-BM militant who surrendered on October 10, 2018, he had joined the group in 2017 along with 19 others. This is an indication that, although the group is not currently involved in armed violence, it is in the process of recruiting new cadres. Also, on September 4, 2018, NLFT-BM issued extortion notices in three villages–East Potacherra, Raima, and Boalkhali–close to the Indo-Bangla international border in Dhalai District.

In a development which highlights the continuing action against militant groups in the State, an Unlawful Activities (Prevention) Tribunal formed by the Union Ministry of Home Affairs (UMHA) on November 15, 2018, would reportedly visit Tripura from February 2, 2019, to record evidence against NLFT and ATTF. The UMHA imposed a fresh five-year ban on NLFT and ATTF on October 3, 2018.

Another persisting issue in the State is the repatriation of Bru refugees who had fled Mizoram in 1997. According to reports, there were over 35,000 Bru refugees in the State in 1997. Since then several attempts have been made to repatriate these refugees, but no significant progress has been made in this direction. On July 3, 2018, in a meeting attended by Union Home Minister Rajnath Singh, Tripura Chief Minister Biplab Deb, and the then Mizoram Chief Minister Lal Thanhawla, it was decided to provide financial aid of INR 400,000 to each refugee family. Moreover, each family was assured an allowance of INR 5,000 per month. It was also decided that INR 150,000 would be given to each family for construction of houses and that each refugee would be given free rations for two years.

Nevertheless, according to a January 16, 2019, report, out of 5,000 refugee families who were to be repatriated between August 25 and September 25, 2018, following the meeting, only 150 members of 42 families returned to Mizoram during the repatriation exercise. The Mizoram Bru Displaced Peoples Coordination Committee (MBDPCC), an umbrella organisation of displaced Brus, has been demanding the creation of an Area Development Council (ADC) for the Brus in Mizoram; the allocation of five hectares of land to each refugee family; cluster villages, each housing at least 500 families; INR 4,00,000 compensation to each family before repatriation and revision of electoral rolls in relief camps. MBDPCC had also stated that Bru families will not return to Mizoram unless the Centre fulfils their charter of demands.

Again, on July 22, 2018, the Brus demanded a uniform financial package for the Bru repatriates who have been repatriated since 2010. Elvis Chorkhy, the Chairman of the Bru Coordination Committee (BCC), stated,

There are around 1,712 families who have already returned to Mizoram since 2010. Recently we learnt that repatriation package has been increased to a great extent. We feel it is our right to demand the same. We believe in first come first serve basis and demand equal package.

He claimed that repatriated Brus had received a one-time package of INR 80,000 per family and free ration for a year.

Another issue which plagues the State is the renewed demand by indigenous tribals for a separate state ‘Twipraland’. IPFT, one of the three tribal based political parties in Tripura [the others being the Indigenous Nationalist Party of Tripura (INPT) and National Conference of Tripura (NCT)], which is an ally of the BJP led State Government, had called for a dawn to dusk general shutdown in the Tripura Tribal Areas Autonomous District Council (TTAADC) area on December 5, 2018, demanding separate statehood for the tribal areas and withdrawal of CAB.

The main impetus of the insurgency in Tripura was the influx of refugees from East Pakistan (present day Bangladesh), which reduced the indigenous population to a minority in the State. The local population’s ire over CAB must be seen in this light, and any destabilizing impact of this hasty legislation could result in a resurgence of violence in the State. On January 18, 2019, an unnamed senior Tripura Police official had disclosed,

We have detected 2,245 illegal immigrants in Tripura last year (2018) among them 2,058 are male and 187 are female. Most of the illegal migrants are from neighbouring Bangladesh. Altogether 2,127 Bangladeshis were deported last year.

There has been a steady stream of incidents of Rohingyas and other illegal migrants travelling to or being arrested in Tripura. On January 22, 2019, the BSF handed over 31 Rohingya Muslims, who were stranded along the India-Bangladesh border since January 18, 2019, to the Tripura Police. A day earlier, on January 21, 2019, 30 Rohingyas were arrested from a Guwahati (Assam)-bound bus at Churaibari in North Tripura District. The group, including nine women, had boarded the bus from Agartala, capital of Tripura. According to a February 3, 2019, report at least 68 Rohingyas have reportedly been detained in Tripura between January 21, 2019, and February 3, 2019. The report also stated that 62 Rohingya Muslims were arrested in 2018 after they entered Tripura illegally.

Tripura has been remarkably successful is wiping out blazing insurgency and stands out as an extraordinary model for other conflict affected States in the region. However, Agartala is yet to deal effectively with tribal discontent and shifting demographics that provoked and fuelled the insurgency. With the on-going anti-CAB protests throughout the region, the likelihood of escalating political agitations and violence can only increase. The gains of an exceptional counter-insurgency campaign have now been put at risk by an irresponsible and destabilizing political gambit.