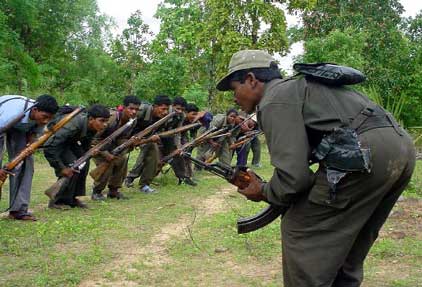 Deepak Kumar Nayak Research Assistant, Institute for Conflict Management | | 09 Aug 2017, 05:29 pm
#Bihar, # Resurgent Threat
In the intervening night of August 2 and 3, 2017, around 100 Communist Party of India-Maoist (CPI-Maoist) cadres reportedly blew up a mobile tower, abducted three gatemen from different railway level-crossings and also laid siege to the Danapur Durg Express train for a few hours, abducting the cabin man, in the Lakhisarai District of Bihar. "Around 100 rebels were involved in the abductions from the level crossings, located in a 10-km radius," Inspector General of Police (IGP), Bhagalpur Zone, S.M. Khopde disclosed. They then hijacked the train. A statement by the Central Reserve Police Force (CRPF) noted, "Train no-13288 Danapur Durg Express train was hijacked near the Bhalui station [in Bhimbandh area of Lakhisarai] around 2:30 am (on Thursday). The cabin man who was on duty was also abducted." The siege ended after an exchange of fire took place between personnel of the Commando Battalion for Resolute Action (CoBRA), a specialised unit of CRPF proficient in guerrilla tactics and jungle warfare, and the hijackers. However, no casualty was reported from either side. The gatemen and the cabin man were subsequently released.

The incident occurred on the last day of a weeklong bandh (general shutdown strike) called by the Maoists across India. 'Martyrs' week' is observed by the Maoists every year between July 28 and August 3, to honour their comrades killed in encounters with Security Forces (SFs).

The last incident of train hijacking in the State was reported on June 13, 2013, in which at least three persons - a Railway Protection Force (RPF) trooper Sukhdev Devnath Singh from Uttarakhand, a sub-inspector with the Bihar Police, Kumar Amit, and an employee with a private firm, Sarwar Islam - were killed, and another 10 persons were injured when Maoists opened indiscriminate fire and hurled bombs on the 13331 Dhanbad-Patna Intercity Express in Jamui District.

According to partial data collated by the Institute for Conflict Management (ICM), Bihar has accounted for at least 61 Maoist-linked attacks on the Railways since September 21, 2004 (the formation day of the CPI-Maoist), till August 6, 2017. These attacks have resulted in 25 deaths (nine civilians and 16 SFs) and 32 injured. While the August 2-3, 2017, incident was the first such operation reported in the current year, there were two such incidents in 2016 (no injuries or fatalities). There was no such incident in 2015, while in four incidents were recorded in 2014, with four civilians killed and eight injured.

Meanwhile, civilians continued to bear the brunt of Naxalite [Left Wing Extremism (LWE)]-linked violence in the State. On July 14, 2017, three members of a family were abducted and subsequently killed in Jamui District by CPI-Maoist cadres, who suspected them to be 'police informers'. Giving details on the incident, Jamui Superintendent of Police (SP), Jayant Kant disclosed, "We found the bodies near Kukurjhap dam near Barhat. A red slip found at the spot claimed responsibility for the killings."

On June 24, 2017, a 26-year-old woman was beheaded by CPI-Maoist cadres in Nawada District. A note found near her body read, "She was a police informer and worked against the spirit of people's revolution. The local Police Station in-charge will meet the same fate".

On June 17, 2017, CPI-Maoist cadres beheaded a man alleging he was a 'police informer' in Jamui District. Police said the Maoists abducted Vijay Barnawal, a resident of Bhelwaghati in the Giridih District of Jharkhand, who was earlier an active member of a Maoist group, on June 16, when he had gone to neighbouring Bihar for some work. His decapitated body was found in Sijuwa village, Jamui District.

According to partial data collated by the ICM, Bihar has already accounted for at least 10 civilian fatalities in the current year (data till August 6, 2017), as against seven such fatalities recorded during the corresponding period of 2016. Civilian fatalities during the corresponding period of earlier years, between 2011 and 2015, had registered continuous declines, from a peak of 30 in 2010, down to four in 2015. The number of civilians killed through 2016 stood at eight.

The recent surge is consequently worrisome, though it can primarily be attributed to the growing belief among the Maoists that more and more civilians are acting as 'police informers', as their cadres suffer increasing reverses at the hands of SFs', while failing to inflict similar losses on SFs.

SFs have eliminated seven Maoists in the current year, thus far, without suffering a single loss. On the contrary, they had lost 13 of their own personnel, while killing only eight Maoists, in the corresponding period of 2016. The situation was not much better in the corresponding periods of 2014 and 2015 as well. SFs and Maoists lost an equal number (two each) in 2015, while the number of SF troopers killed was six, as against three Maoists in 2014. The total number of SF personnel (179), and Maoists (178) killed since September 1, 2004, is almost the same. The last major attack (involving three more fatalities) targeting SFs in Bihar was recorded on July 18, 2016, when 10 CoBRA commandos were killed and another five injured, in a CPI-Maoist orchestrated Improvised Explosive Device (IED) blast and subsequent encounter in the Chakarbanda-Dumarinala Forests of Aurangabad District. Three Maoists were also killed in the encounter.

The Maoists have been involved in four incidents of arson in 2017 (till August 6), as against eight such incidents in the corresponding period of 2016. No incident of landmine explosion has been orchestrated by Maoists in the current year, whereas two such incidents were reported in 2016.

Unsurprisingly, Rajiv Rai Bhatnagar, Director General (DG) of the CRPF, claimed on July 26, 2017, that the area controlled by CPI-Maoist had "shrunk in three States in last two and a half years. There is substantial decline in areas controlled by Naxals in Bihar, Jharkhand, and West Bengal. Disturbance in these areas are very less. Our major concern is in South Bastar of Chhattisgarh."

Nevertheless, the Maoists in Bihar remain a significant challenge, as was evident from the train hijacking incident and the increasing number of civilian killings. According to the data available on the Ministry of Home Affairs (MHA) website, as on April 30, 2017, Bihar ranked third among the 10 States worst hit by LWE violence in 2016. MHA figures indicate that 1,048 incidents of LWE violence took place in 10 States in 2016. Bihar ranked third with 129 incidents; Chhattisgarh, with 395 incidents, topped the list, followed by Jharkhand with 323. Andhra Pradesh, Madhya Pradesh, Maharashtra, Odisha, Telangana, Uttar Pradesh and West Bengal were the other LWE affected States listed.

Meanwhile, in addition to earlier security measures , the State Government has decided to initiate some new steps. According to a June 20, 2017, media report, the Bihar Government has announced cash rewards ranging from INR 25,000 to INR 500,000, for anyone giving information about at least 43 top CPI-Maoist leaders active in the State. The cash awards will be on offer for anyone who gets hold of the Maoist leaders - living or dead - or assists the Police in facilitating their arrest. Sanjiv Kumar Singhal, Additional Director General (ADG, Headquarters), stated, "Anyone cooperating with the Police in getting hold of the Maoists will be rewarded with cash, as announced by the Bihar government for each of the ultras falling in the rewards category." Interestingly, no arrest has been reported thereafter.

The top Maoists leaders with a cash reward of INR 500,000 include Arvind Kumar Singh aka Dev aka Arvind Kumar of Jehanabad; Sandip Ji aka Vijay Yadav of Gaya; Ram Babu Ram aka Rajan of Madhuban and Parvesh Da aka Anuj Da aka Amlesh Da of Hazaribagh (Jharkhand). Of these, Arvind is the topmost Maoist leader in the State, with a 'national stature'. A politburo member of CPI-Maoist, he carries a reward of INR 10 million in Jharkhand, where he is wanted in at least 13 cases. He also carries a cash reward of INR four million each in Chhattisgarh and Maharashtra. In addition to these top four, a reward of INR 50,000 each has been announced on another 33 Maoists; and INR 25,000 each against four Maoists. Specific information regarding the remaining two is unavailable. Interestingly, 21 out of these 43 Maoists belong to a single District - Jamui in south-eastern Bihar.

On the operational front, SFs have decided to intensify action in Maoist strongholds. According to CRPF sources, three pockets - the Jamui/Nawada/Giridih triangular section, the Gaya Aurangabad section, and the Lakhisarai/ Munger/Banka/Jamui section - still see significant CPI-Maoist influence. On May 19, 2017, to effectively counter the Maoists, CRPF Inspector-General (IG), Bihar Sector, Manvider Singh Bhatia, disclosed that two additional battalions were required in the State to effectively tackle the threat. At present, three battalions of Sashastra Seema Bal (SSB) and five regular and two CoBRA battalions of CRPF are deployed against the Maoists in Bihar. Bhatia also disclosed that the long-pending plan for positioning of a chopper, either at Patna or Gaya, for anti-Maoist operations, was discussed with State Government officials at a meeting held in Patna in April 2017. At present, four choppers are stationed in the Ranchi District of Jharkhand for anti-Maoist operations in Bihar.

The Maoists have suffered tremendous reverses across the country, and to retain some of their lost areas of influence, they are striving to 'regain' Bihar, an erstwhile their stronghold. A lack of political will has long hampered the state's progress in its fight against the Maoists, and there are specific reports of direct links between the political class and the Maoists in the State. Most recently, during his interrogation, Musafir Sahni aka Alok Ji, a self-styled CPI-Maoist 'zonal commander' confessed that one north Bihar Member of Legislative Assembly (MLA) had recently paid INR 500,000 to CPI-Maoist in Muzaffarpur District. Sahni further added that at least 25 elected people's representatives, including three legislators, had been paying 'levy' to Maoists operating in north Bihar. Sahni was arrested along with four other CPI-Maoist cadres (Rambali Paswan, 'area commander' of Saraiyya area in Muzaffarpur; Anil Sahni; Ganesh Rai; and Shiv Kumar Ram) from Ramnagar village in the Sakra Police Station area of Muzaffarpur District on May 11, 2017. SFs recovered 18 live assault rifle cartridges, eight live pistol cartridges, two country made pistols, 14 detonators and Maoist literature from them.

Intensification of operations and a clear political mandate to SFs are now an imperative to prevent the Maoists from staging a comeback - however limited - in Bihar. Any lack of focus on their containment at this juncture will simply create opportunities for their reconsolidation in the State.