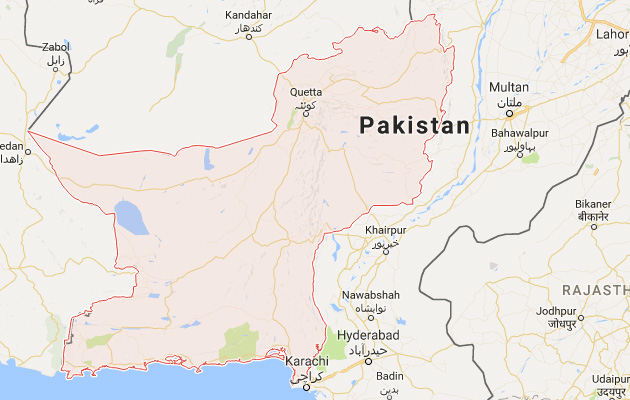 Tushar Ranjan Mohanty Research Associate, Institute for Conflict Management | | 20 Jun 2017, 08:29 pm
#Balochistan, # The Chinese Chequered
The Islamic State (IS, also Daesh) on June 8, 2017, claimed the killing of two Chinese nationals who had been abducted from the Jinnah Town area of Quetta, the provincial capital of Balochistan, in the afternoon of May 24, 2017. Amaq, the IS propaganda agency, declared, "Islamic State fighters killed two Chinese people they had been holding in Baluchistan province, south-west Pakistan." The Chinese couple, Lee Zing Yang (24) and Meng Li Si (26), were studying Urdu in Quetta, where they reportedly also ran a Mandarin language course.According to Deputy Inspector General Police Aitzaz Goraya, unknown abductors, wearing Police uniforms, had forced the two foreigners into a vehicle at gunpoint and driven away. They also tried to overpower another Chinese woman but she ran away. A man present at the site attempted to resist the kidnapping, but was shot at by one of the abductors. So far no local group has claimed responsibility for the incident (abduction and subsequent killing). Reports speculate that the actual perpetrators were linked to the Lashkar-e-Jhangvi al Alami (LeJ-A), the international wing of the LeJ, which believed to be affiliated to Daesh.

The claim came hours after Inter-Services Public Relations (ISPR) released details of a three-day operation (June 1-3) by the Pakistan Army against Daesh-affiliated terrorists in the Mastung area of Balochistan, in which Security Forces (SFs) had killed 12 suspected terrorists, including two suicide bombers. ISPR claimed,  There were reports of 10-15 terrorists of a banned outfit Lashrake-Jhangivi Al-Almi (LeJA) hiding in caves near Isplingi ( Koh-i-Siah/Koh-i- Maran) 36 Kilometer South East of Mastung." And further, "The suicide bomber used against Deputy Chairman of Senate Maulana Abdul Ghafoor Haydri on May 12 was also sent by [the targeted group]." The ISPR statement asserted that SFs destroyed an explosives facility inside the cave where the terrorists were hiding, and recovered a cache of arms and ammunition, including 50 kilogrammes of explosives, three suicide jackets, 18 grenades, six rocket launchers, four light machine guns,18 small machine guns, four sniper rifles, 38 communication sets and ammunition of various types.

Pakistan initially denied the Chinese couple's death, perhaps due to Prime Minister Nawaz Sharif's presence, alongside Chinese President Xi Jinping, at the Shanghai Cooperation Organisation (SCO) Summit in Astana on June 9, 2017. The first reaction from Pakistani authorities came four days after the Daesh claim. On June 12, 2017, Federal Minister of the Interior Chaudhry Nisar Ali Khan confirmed that two Chinese nationals who had been abducted from Quetta had been killed.

The killing of the Chinese couple has underscored questions about the security of Chinese workers in Pakistan, and the country's centrality to China's ambitious One Belt One Road (OBOR) Initiative. The centrepiece of the 'new Silk Route' plan, the China-Pakistan Economic Corridor (CPEC), passes through insurgency-hit Balochistan. Earlier, on May 31, 2017, amid Beijing's growing concerns about the safety of two of its abducted nationals, the National Security Committee, presided over by Prime Minister Nawaz Sharif, reviewed the security of CPEC and Chinese nationals based in Pakistan. The NSC meeting released a press statement which gave no details, but noted that "security for CPEC projects also came under discussion".

On June 3, 2017, 11 Chinese nationals- three men and eight women - living in the Jinnah Town of the Quetta were shifted to Karachi, and then flown back to China. Abdul Razzaq Cheema, Quetta's Regional Police Officer, stated that these Chinese nationals had been living in Quetta for almost a year, and that two South Korean families had also been living in Quetta's Jinnah Town for four years. After the abduction of the two Chinese nationals, Police had increased security of Chinese and other foreign nationals working on different component projects of CPEC, as well as with NGOs and United Nations' organisations in Quetta and other parts of Balochistan.

The complex, multilayered, seemingly never-ending security crisis in Balochistan appears more dangerous with the entry of Daesh onto the scene. Balochistan has been under attack by separatists, insurgents, and Islamist terrorists for over a decade, and the situation can only worsen with Daesh's entry. The Government, however, continues to deny Daesh's existence in the Province and, most recently, on June 13, 2017, Balochistan Home Minister Mir Sarfaraz Bugti insisted that the group had no presence in the Province.

While the abduction and killing of the Chinese nationals was clearly a security failure, Pakistan has given the crime a religious angle, diverting attention from issues relating to ongoing CPEC projects in insurgency-hit Balochistan. Thus, on June 12, 2017, Federal Minister of the Interior Chaudhry Nisar Ali Khan claimed that the slain Chinese couple belonged to a group of Chinese people who had obtained a business visa for Pakistan but were engaged in 'preaching.' In a meeting held at the Interior Ministry to review issuance of visas to Chinese nationals and registration of international nongovernmental organisations (INGOs), Nisar was told the couple was part of a group of Chinese citizens who obtained business visas from the Pakistani Embassy in Beijing. However, instead of carrying out any business activity, they were engaged in evangelical activities in Quetta, under the garb of learning Urdu language at the ARK Info Tech Institute owned by a South Korean national, Juan Won Seo.

On June 14, 2017, however, South Korea rejected Pakistan's contention that the slain Chinese nationals were preaching Christianity under the guise of studying Urdu at a school run by a South Korean. An unnamed South Korean official asserted that there was no evidence to show the couple was involved in proselytizing under Seo's guidance.

Meanwhile, China's official media Global Times has criticized South Korean Christian groups for converting young Chinese and sending them to proselytise in Muslim countries. The kidnapping was a rare crime against Chinese nationals in Pakistan, but has alarmed the growing Chinese community in the country. A Global Times editorial argued, "while the atrocity" by the Islamic State in killing the two Chinese is appalling, it cannot drive a wedge between China and Pakistan, nor will CPEC construction be disrupted.

Behind the whole episode of Daesh's abduction and killing of Chinese nationals, there is a clear intention of hurting Chinese interests. This is just the latest instance of Daesh targeting China, which is home to more than 20 million Muslims, including Uyghurs, in the Xinjiang province. In 2014, Daesh leader Abu Bakr al Baghdadi explicitly equated China with the US, Israel and India as an 'oppressor of Muslims'. That this was not mere rhetoric was demonstrated by the group's subsequent execution of a Chinese citizen, Fan Jinghui, in Iraq on November 20, 2015. In February this year, ISIS released a slickly produced propaganda video detailing for the first time "scenes from the life of immigrants from East Turkistan [Xinjiang] in the land of the Caliphate" in which an Uyghur terrorist promised to "shed blood like rivers" to avenge Beijing's alleged oppression in Xinjiang.

Arif Rafiq, fellow at the Centre for Global Policy, a Washington think tank, observed, on January 9, 2017, that "Balochistan provides IS with an opportunity to not only strike at Pakistani interests, but also those of China and Iran. Anti-state jihadis in Pakistan have previously sought to target Chinese citizens in Pakistan, knowing that this would strain relations between Beijing and Islamabad. Jihadis in Balochistan who've made the switch from al-Qaeda to IS are on a similar mission."

Apart from Daesh's abduction and killing of the Chinese couple, there has always been a lingering threat to Chinese engineers and workers associated with CPEC projects, as these have been rejected by Baloch nationalists who considers CPEC a 'strategic design' by Pakistan and China to loot Balochistan's resources and eliminate the indigenous culture and identity. Dubbing China as a 'great threat' to the Baloch people, UNHRC Balochistan representative Mehran Marri argued, on August 13, 2016, that "China really-really is spreading its tentacles in Balochistan very rapidly, and therefore, we are appealing to the international community. The Gwadar project is for the Chinese military. This would be detrimental to international powers, to the people's interest, where 60 percent of world's oil flows. So, the world has to really take rapid action in curbing China's influence in Balochistan in particular and in Pakistan in general."

Pakistan currently hosts a sizable Chinese population and the numbers are slated to grow as the project progresses. Concern about the demographic transformation of Balochistan was reiterated in a report by the Federation of Pakistan Chambers of Commerce and Industry (FPCCI) on December 28, 2016, which noted that, at the current rate of influx of Chinese nationals into Balochistan and after completion of the CPEC, the native population of the area would be outnumbered by 2048.

Pakistan earlier beefed up security around Chinese citizens streaming into the country on the back of Beijing's OBOR infrastructure build-up across the nation. On February 20, 2017, the Government announced the creation of a special contingent of 15,000 personnel from the Maritime Security Force (MSF) and Special Security Division (SSD) to protect 34 CPEC related projects, including Gwadar and other coastal projects, and to ensure the safety of locals and foreigners working on CPEC projects. Senator Mushahid Hussain Sayeed, Chairman of the Parliamentary Committee on CPEC, after a committee meeting in Parliament House on February 20, 2017, disclosed, "The SSD is a force that will provide security to 34 CPEC related projects, while the MSF will safeguard the Gwadar port and other coastal areas of the country".

Despite these security arrangements, militants succeeded in killing 10 labourers on May 13, 2017 and three labourers on May 18, 2017, at CPEC related projects in the Gwadar District of Balochistan. Since the start of CPEC projects in Balochistan in 2014, at least 57 workers (all Pakistani nationals) connected with these projects, have been killed. With global terrorist formations such as Daesh and al Qaeda entering the fray, and a range of domestic Islamist terrorist formations, prominently including LeJ-A and Tehrik-e-Taliban Pakistan, as well as Baloch nationalist formations, all opposing the Pakistani state in general, and Chinese projects in the country in particular, this pattern of violence can only increase.