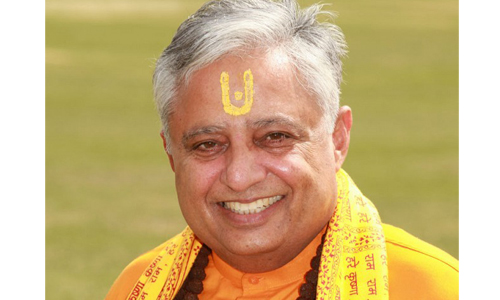 Distinguished Hindu statesman Rajan Zed will deliver the invocation from ancient Sanskrit scriptures before the City Council. After Sanskrit delivery, he then will read the English translation of the prayer. Sanskrit is considered a sacred language in Hinduism and root language of Indo-European languages.

Rig-VedaUpanishads Bhagavad-GitaReciting from , Rajan Zed plans to say "Asato ma sad gamaya, Tamaso ma jyotir gamaya, Mrtyor mamrtam gamaya", which he will then translate as “Lead me from the unreal to the Real, Lead me from darkness to Light, and Lead me from death to Immortality.” Reciting from , he proposes to urge councilmembers to keep the welfare of others always in mind.

Newman, whose tagline is “Honoring the Past, Celebrating the Present, Building for the Future”, is known for its annual Fall Festival. Ed Katen, Robert Martina and Michael Holland are Mayor, Mayor Pro Tem and City Manager respectively.