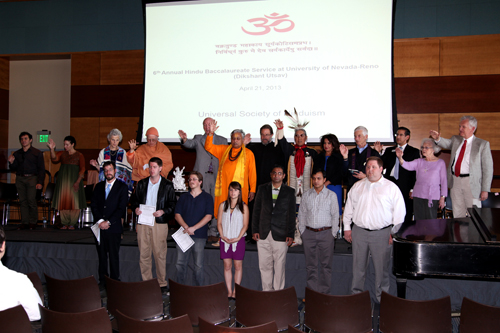 Organized by Universal Society of Hinduism (USOH) in collaboration with UNR Diverse Organization of South Asians, it will bless the graduating class in the traditional Hindu style, complete with applying tilak (religious mark) on the foreheads of graduates.

Besides keynote address by a distinguished Hindu monk from California, it will also include blessing prayers by Christian (various denominations), Muslim, Buddhist, Jewish, Baha’i and Native American religious leaders. Well known musician Jim R. Eaglesmith will chant a kirtan number in Sanskrit with audience following him in the chant.

Starting with ‘Gayatri Mantra’ (considered Hinduism’s most sacred verse from oldest existing scripture Rig-Veda) recitation by Rajan Zed, USOH President, and traditional lamp lighting before the image of goddess Saraswati, patron of learning and the arts; it will include blessing the upcoming graduates with wisdom from Vedas, Upanishads and Bhagavad-Gita—all ancient Hindu scriptures. Nevada State Controller Kim R. Wallin will be part of this blessing ceremony.

Education in Hindu tradition has been deep rooted; distinguished Hindu statesman Rajan Zed says and adds that after many important universities in ancient India, like Taxila, Nalanda, Sarnath, Amaravati, Banaras, Kanchi and Ujjain; great Indian universities also flourished in medieval period, like Odantapura (745 CE), Vikramasila (810 CE), Somapura (480 CE), Jagaddala (1090 CE). The purpose of this Baccalaureate Service is to root the graduating class in divine spiritual and cultural tradition so that they have a spiritually meaningful life in addition to material success, Zed stresses.

This Seventh Annual Hindu Baccalaureate Service will be held at Joe Crowley Student Union (4th floor, Ballroom C), starting 05-00 pm. The event is free and all are welcome (graduating or not graduating, student or non-student). RSVP at rajanzed@gmail.com preferred but walk-ins also welcome. Food will be served after the Service.

Image: Religious leaders (and others) belonging to various religions and denominations blessing some of the graduating students at the “6th Annual Hindu Baccalaureate Service of UNR” on April 21, 2013.