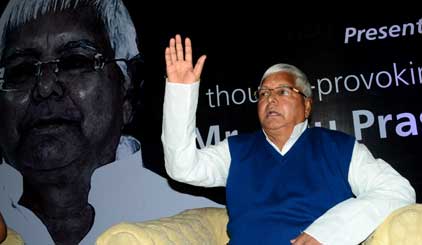 Even a butcher is shy of Modi: Lalu Prasad

"After what he has done in Gujarat (during 2002 riots), even a butcher is shy of Narendra Modi. Will the people make this person the Prime Minister of India?" Lalu Prasad said.

Pertinently, the Trinamool Congress (TMC) on Monday called Modi the 'Butcher of Gujarat'.

In a statement, TMC spokesperson Derek O`Brien  attacked Modi by calling him the 'Butcher of Gujarat'.

"The Butcher of Gujarat has air-dropped into Bengal. He has no answers to Bengal's development model. So, he is making personal attacks," he said.

"The Butcher of Gujarat says Didi pocketed Rs 1.8 crore by selling one painting of hers. He should prove it or face defamation. The paintings were sold not for personal gain. The money was used for good causes as well as to fund elections. Hence electoral reforms are a priority for Trinamool," the TMC spokesperson said.

The infamous Gujarat riots of 2002 left hundreds of Muslims dead, injured and tortured and came as a blot in the BJP rule in the state.

The riots followed an incident of train burning in Godhra in which Hindus returning from Ayodhya were killed by a Muslim mob.