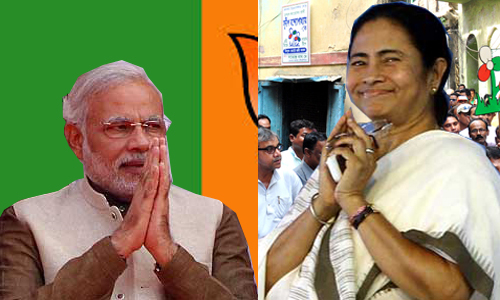 Modi vs Mamata: TMC hits back on painting row

A day after Modi in an election rally in West Bengal targetted Mamata Banerjee alleging that her painting was purchased for an astronomical Rs 1.8 crore by the jailed owner of the tainted ponzi scheme company Saradha Group, three top leaders of Trinamool Congress held a press conference on Monday to hit out at Modi.

Modi was asked to apologize of face a defamation suit by the TMC.

"Modi has alleged that a painting of Mamata Banerjee has been sold for Rs 1.8 crore. He has to either prove his allegation or apologize," said TMC general secretary Mukul Roy.

Roy said the sale proceeds of Mamata Banerjee's paintings were either donated to organisations like Spastic Society or spent on running the party mouthpiece Jago Bangla which does not accept any advertisements otherwise.

"Everything is audited and all Income Tax regulations were duly maintained," said Roy.

Roy said the BJP and the opposition Communist Party of India-Marxist (CPI-M) in West Bengal are in league now like they had come together in 1977.

West Bengal Finance Minister Amit Mitra said Modi has cast aspersions on a leader [Mamata Banerjee] who does not even accept her salary.

"Modi parachutes into West Bengal knowing nothing of the state. He made low level personal attack. Either he has to apologize in public
or we will file a defamation suit because this is patently false," said Amit Mitra.

Mitra said TMC had demanded for long state funding of elections like in abroad.

Attacking Modi, Mitra said the BJP PM candidate is duping the people in the name of Gujarat model.

"Mr Modi has to answer for the case of Bharat Aluminium Company Ltd [Balco] which was a 6000 crore INR company but was sold for 550 crore INR.  That extra money is used today for election purpose of BJP," said Mitra.