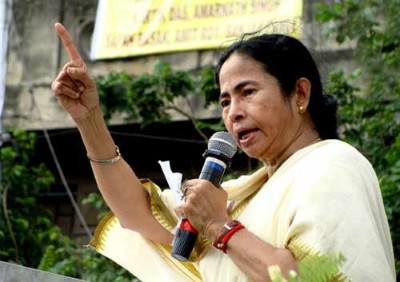 India Blooms News Service | | 08 Apr 2014, 11:18 am
#Election Commission, # Mamata Banerjee
New Delhi/Kolkata, Apr 8 (IBNS) The Election Commission (EC) has set a deadline till 2.30 pm on Tuesday for the West Bengal government to transfer some state officials as per its order.

She called the Commission's decision a 'conspiracy'.

"I came to know in this meeting that the Election Commission has given order for transfer of five SPs without consulting state government. The names of their replacement have also been announced," she said while addressing a poll rally at Pandua town in Hooghly district.

"I respect the Election Commission. But I am not going to bow down," Banerjee said.

"Will you only listen to what Congress will say in order to facilitate victory of Congress, BJP?" said the Chief Minister.

Calling the move a conspiracy, she said: "It is a conspiracy by a media house, the central government, the Congress, the EC, the BJP and  the CPI-M. I am going to fight alone. I don't care about your conspiracy."