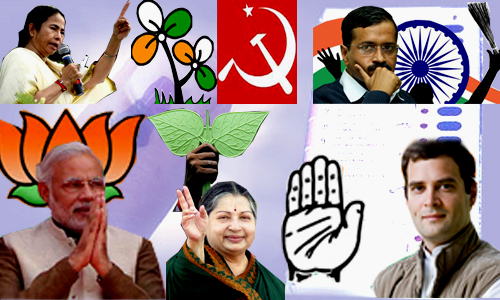 India Blooms News Service | | 12 May 2014, 03:47 pm
#Lok Sabha polls
Varanasi/Kolkata/Patna, May 12 (IBNS) High voter turnout was recorded on Monday in the final phase of polling in India to elect a new Parliament in New Delhi with West Bengal leading with a balloting of around 67% till 3 pm.

Till 3 pm, around 67% voters cast their ballots in West Bengal while 42.65% polling was witnessed in the six Lok Sabha seats of Bihar.

A staggered nine-phase general elections in India to elect a new government in New Delhi reached its final phase on Monday as people in three states are voting in 41 constituencies to seal the fates of 606 candidates, including bigwigs like Bharatiya Janata Party (BJP)'s prime ministerial candidate Narendra Modi and Aam Aadmi Party (AAP) chief Arvind Kejriwal who are pitted against each other in the holy city of Varanasi.

However, as polling began reports of intimidation and clashes poured in from West Bengal, a politically volatile state.

Polling is being held in 41 seats across West Bengal, Uttar Pradesh and Bihar with the spotlight in Varanasi owing to the contest of two heavyweights while Bengal hogged the limelight for violence. About 9 crore people are eligible to vote in this round.

In West Bengal, polling is being held in 17 seats, including South and North Kolkata seats. Fates of 188 candidates will be sealed in the state by voters in the final phase of the polling. A total of 18 seats, out of 80, are going to polls in Uttar Pradesh. In Bihar, six seats are up for grabs.

Since morning  long queues were seen in Varanasi as people in large number turned up to cast their ballots. Besides Modi and Kerjriwal, Varanasi also has Congress candidate Ajay Rai as a challenger.

Narendra Modi earlier tweeted: "Today is final phase of 2014 Polls. Urging all those voting in 41 seats across 3 states & Assembly by-polls in WB to vote in large numbers."

"My special request to the youth - go out & vote and take your family and friends along to the polling booth!"

AAP on its Facebook page posted: "Today there is polling in 41 constituencies, Varanasi is one of them. Today's polling will play a crucial role in the process of ending corruption and crony capitalism in our country.  If there is voting in your area today, then Must go out and vote for an honest candidate."

AAP candidate Kejriwal said the victory will be of truth and honesty. He also said Modi would lose the battle.

In Varanasi Congress candidate Ajay Rai courted a controversy by swearing the party symbol in his kurta while going to vote.

Among the three states, Uttar Pradesh assumes greater significance as voters are deciding the fates of AAP chief Arvind Kejriwal and BJP PM candidate Narendra Modi- who are contesting the battle against each other in the Varanasi seat.

Samajwadi Party (SP) chief Mulayam Singh Yadav, who is likely to play yet another crucial role in the government formation at the Centre, is contesting from Azamgarh seat in UP where people are voting on Monday.

Meanwhile, clashes, intimidation and firing were reported from West Bengal which is witnessing its last phase of polls along with rest of India as the opposition parties claimed the ruling Trinamool Congress (TMC) has unleashed terror.

Reports of clashes came from all parts of West Bengal on Monday with worst incidents occurring in Harao in North 24 Parganas where CPI-M alleged the attack was led by a woman lawmaker and her husband of the ruling party.

The Communist Party of India-Marxist (CPI-M) alleged booths were captured by the ruling Trinamool Congress activists.

"We are intimating all incidents to the Election Commission,"  CPI-M leader of Opposition in West Bengal Suryakanta Misra told IBNS.

Polling agents of the BJP and CPI-M were chased away from the booths in one constituency near Kolkata, alleged CPI-M.

At Haroa in North 24 Parganas district (near Kolkata), CPI-M men were attacked with firearms, said Mishra.

Police also admitted the incident but refused to give details.

CPI-M said 21 people were badly injured with one in a critical state.

In Barrackpore on the outskirts of Kolkata, a CPI-M leader was attacked.

"My uncle Biswajit Basu, who is a CPI-M leader, and her wife Soma Basu, who is also a CPI-M polling agent, were beaten up today in Barrakpore," alleged Uttam Basu, a kin of the injured.

Local TV channels reported that a pregnant woman voter was also attacked in Sodpur near Kolkata.

TMC Rajya Sabha member Derek O'Brien was one of the early voters in Kolkata (Kolkata South) and he also took a potshot at Narendra Modi after voting as he tweeted: "Yes,I just voted...No, I did not then come outside the booth and take a selfie :)"

TMC leaders like Dinesh Twivedi and Sougata Roy are also contesting in this phase.

In Bihar, voters are deciding the fates of 90 candidates as polling is being be held in six LS seats on Monday.

This year's polling has witnessed record turnout of voters as 66.27% balloting was reported in 502 Lok Sabha seats so far.

Counting of votes will take place on May 16. The next government will be India's 16th Lok Sabha.