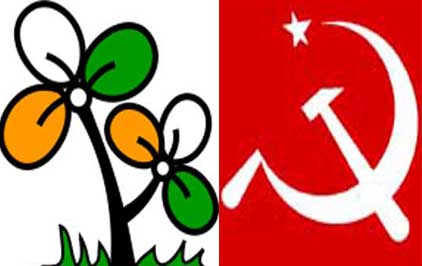 India Blooms News Service | | 12 May 2014, 01:00 pm
#Trinamool Congress, # Violence mars polling
Kolkata, May 12 (IBNS) Clashes, intimidation and firing were reported from West Bengal which is witnessing its last phase of polls along with rest of India as the opposition parties claimed the ruling Trinamool Congress (TMC) has unleashed terror.
Reports of clashes came from all parts of West Bengal on Monday with worst incidents occurring in Harao in North 24 Parganas where CPI-M alleged the attack was led by a woman lawmaker and her husband of the ruling party.

The Communist Party of India-Marxist (CPI-M) alleged booths were captured by the ruling Trinamool Congress activists.

"We are intimating all incidents to the Election Commission,"  CPI-M leader of Opposition in West Bengal Suryakanta Misra told IBNS.

Polling agents of the BJP and CPI-M were chased away from the booths in one constituency near Kolkata, alleged CPI-M.

At Haroa in North 24 Parganas district (near Kolkata), CPI-M men were attacked with firearms, said Mishra.

Police also admitted the incident but refused to give details.

CPI-M said 21 people were badly injured with one in a critical state.

In Barrackpore on the outskirts of Kolkata, a CPI-M leader was attacked.

"My uncle Biswajit Basu, who is a CPI-M leader, and her wife Soma Basu, who is also a CPI-M polling agent, were beaten up today in Barrakpore," alleged Uttam Basu, a kin of the injured.

Local TV channels reported that a pregnant woman voter was also attacked in Sodpur near Kolkata.

In West Bengal, polling is being held in 17 seats, including South and North Kolkata seats. Fates of 188 candidates will be sealed in the state by voters in the final phase of the polling.