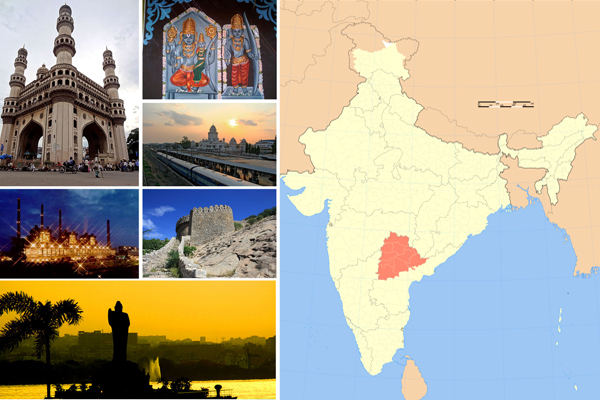 By Fakir Mohan Pradhan | | 17 Mar 2015, 11:36 am
#Telangana, # Maoist Ebb
Research Associate, Institute for Conflict Management After a protracted political slug fest and acrimonious protests, the new State of Telangana was created on June 2, 2014, bifurcating Andhra Pradesh. According to the arrangement, Hyderabad will remain the joint capital for both the States for ten years, after which Andhra Pradesh will have its own capital and Hyderabad will be transferred entirely to Telangana. While Telangana has 10 Districts, the residuary Andhra Pradesh has 13. Interestingly, even as the undivided Andhra Pradesh successfully broke the backbone of Maoist movement in the State, the Maoists managed retain a shadow of their presence in the State. That shadow remains visible in Telangana.

At the time of the creation of Telangana, there was some apprehension that the Maoists would find conditions in the new State favourable to engineer a comeback, particularly in view of the fact that the movement for the bifurcation of Andhra wasdeeply penetrated by Maoist elements. Eight months after the creation of the new State, however, the profile of Maoist activities has not changed significantly.

On February 14, 2015, the Bhadrachalam Sub-divisional Police claimed to have foiled a bid by Maoists to plant explosives in the Korkatpadu forest area in Charla mandal in Khammam District to kill policemen. Four persons were arrested, including Madakam Deva (20), a special guerrilla squad (SGS) member and Madakam Jogaiah (21), a 'militia commander'. The Police team seized one directional mine and one landmine, 100 metres of electric wire, two electrical detonators and one electric battery from them.

On December 28, 2014, the Bhadrachalam Sub-divisional Police had thwarted a bid by Maoists to blast a cell phone tower, after a half- hour exchange of fire, at Satyanarayanapuram in Charla mandal. The Police recovered three weapons, live ammunition, bows and arrows, petrol cans and revolutionary literature from the incident site. SFs reached the spot after receiving specific information about the Maoist plan.

According to partial data compiled by South Asia Terrorism Portal (SATP), the new State of Telangana, since its inception, recorded two civilian fatalities and one Maoist fatality in 2014. Before the bifurcation, one civilian and one SF trooper had been killed in 2014 in the Telangana region. Thus, the area that now comprises the Telangana State recorded a total of five fatalities - three civilian, one SF trooper [an SPO from Chhattisgarh killed during a private visit] and one suspected Maoist - in 2014. The same area had recorded three fatalities - two civilians and one SF trooper - in 2013. There has, so far, been no casualty in 2015 in Telangana in Left Wing Extremism (LWE)-related incidents.

On December 29, 2014, State Director General of Police (DGP) Anurag Sharma observed that there was no current Maoist activity in Telangana, but that the ultras enter the State from neighbouring States to attempt mischief: "After bifurcation of Andhra Pradesh, the Greyhounds (anti-Naxal force) was divided and whatever units have come to us, they are good enough. We are also training the District Special Parties to tackle the Maoists." Seven incidents of exchange of fire with Maoists took place during 2014, resulting in the death of one extremist, Sharma added, and as many as 68 Maoists surrendered before Police, while 18 were arrested. 166 Maoist cadres hailing from Telangana were still underground.

On the basis of underground and over ground activities of the Maoists, Khammam District remains moderately affected while Adilabad, Karimnagar, Mahabubnagar and Nalgonda Districts are marginally affected.

The Maoist, however, are unlikely to give up their efforts to revive the movement in Telangana - the region that was, for decades, their 'heartland'. The Karimnagar Police foiled Maoists' attempts to revive party activities in the District with the arrest of three persons, including a militant, and the recovery of a huge quantity of ammunition and INR 1.6 million in cash from their possession, on January 13, 2015. Karimnagar DSP J. Rama Rao disclosed that, on credible information, the rural Police arrested Botla Rajendra Kumar (48) of Cheelapur village in Bejjanki mandal (revenue area), Sunil Kumar (53), an illegal arms dealer from Kanpur, and his assistant Vikas Kumar (31), from the Railway Station, and recovered the ammunition and the cash.

Maoists are also making efforts to revive their old dalams (armed squads) in Adilabad District, though the area has not recorded significant rebel activity after the death of Cherukuri Rajkumar alias Azad in an encounter on July 1, 2010. According to sources, the Maoists have revived their Mangi and Indravelli dalams and are focusing on fresh recruitments. Police claim that they were involved in two exchange of fire incidents in and around Mangi Forest in September 2014. In both instances, the Maoists escaped unhurt. Sources indicate that the Maoists are trying hard to impress upon the people that the welfare programmes of the present Telangana Government were only due to the struggle waged by the CPI-Maoist in support of the poor. Some reports suggest that the Maoists are planning to remove Adilabad from the North Telangana Zone (NTZ) and merge it into the Dandakaranya Zone, as this would provide them with a shelter zone when SF pressure is exerted on the Andhra Odisha Border (AOB) area.

Telangana has not deviated from the anti-Maoist strategy followed by the erstwhile united Andhra Pradesh, despite pockets of sympathy in the State's political leadership. At best, the Maoists would like to use Telangana as a base for their activities in the highly affected and contiguous areas of Chhattisgarh and the Gadchiroli District of Maharashtra. There is little evidence, however, that Telangana would provide them the necessary space and licence to secure even this limited objective.