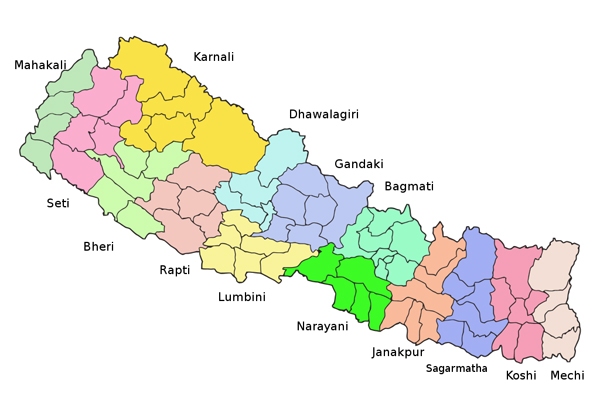 The successful holding of elections for the second Constituent Assembly (CA) on November 19, 2013, have, in some measure, transformed the political environment of the country and diminished violent inter-party clashes. As against 22 such clashes resulting in four deaths and 167 injuries in 2013, no such clashes were reported through 2014.

However, intra-party conflict continues to haunt the country. The fissures within the Unified Communist Party of Nepal-Maoist (UCPN-M) brought the party almost to the brink of a break-up. Supporters of both Chairman Pushpa Kamal Dahal akaPrachanda and former Prime Minister (PM) and former Vice-Chairman Dr. Baburam Bhattarai clashed with each other on various occasions. In one such incident, on April 28, 2014, two UCPN-M cadres loyal to Dahal were seriously injured after cadres loyal to Bhattarai exchanged blows at the opening ceremony of the Rasuwa District Convention, following a heated debate over the duration of the political event. Cadres from remote areas had demanded that the convention be concluded on the day itself, arguing that they did not have enough money for overnight accommodation. Further, the Mohan Baidya aka Kiran -led faction of the Communist Party of Nepal-Maoist (CPN-Maoist-Baidya), which abandoned the UCPN-M on June 19, 2012, split furtheron November 24, 2014, after a splinter-group led by party secretary Netra Bikram Chand submitted a letter to the CPN-Maoist-Baidya Central Committee, announcing its intentions to separate. Subsequently, on December 1, Netra Bikram Chand formed a new party, styling itself as CPN-Maoist.

Meanwhile, the people of Nepal returned a fractured mandate in the second CA elections of November 2013, creating enormous obstacles even to the smooth formation of a new Government, given the history of acrimonious relations between the major political parties. Nevertheless, a new Government was formed on February 9, 2014, when Nepali Congress (NC) President Sushil Koirala became Nepal's 37th Prime Minister, securing more than two-thirds of the votes in Parliament. Belying all fears of a rolling crisis, NC and Communist Party of Nepal-Unified Marxist Leninist (CPN-UML) came together, along with members of 14 other parties and one independent, to constitute a new and stable Government. NC and CPN-UML had emerged as the two leading parties in the CA, with 196 and 175 seats, respectively, in the 601-member CA.

Regrettably, however, the political class continues to fail to deliver the new Constitution, even after over six years of the drafting process. The first CA was constituted on May 28, 2008, with mandate to deliver the Constitution by May 28, 2010. It was, however, dissolved on May 27, 2012, after four extensions. The second CA was constituted on January 21, 2014, and it fixed the deadline for delivery of the Constitution as January 22, 2015. This deadline has, again, been missed, with little concrete advance in addressing the various contentious issues that had stalled the drafting process in the past. These unresolved issues principally include the form of government, federalism, judiciary and the electoral system. Though some reports claimed that the major parties had reached 'near consensus' on issues relating to the system of governance, the electoral and judicial systems, the parties remained at odds on federalism during the last phases of discussions, before the pandemonium broke out in Parliament. Bhattarai, in an interview published on February 4, 2015, remarked,

There is vast difference between the idea of democracy of Congress [NC] and UML [CPN-UML] and the idea of democracy of Maoists and other new forces. The ruling parties are basically in favor of liberal democracy, with its emphasis on majority rule, periodic elections and multiparty competition. We are not opposed to it. But we don't think that is enough... What we need is inclusive democracy... Thus the main battle is between liberal democracy and new inclusive democracy... We have been insisting there should first be genuine federalism, which means the oppressed nationalities must get federal states where their rights and identities are secure. This is the definition of federalism around the world. The kind of administrative re-division Congress and UML have been talking about is not federalism... The other important constitutional issue is proportional representation. If we go back on this, as the ruling parties want to, it will be death of inclusive agenda. We cannot compromise on these two issues...

NC Central Working Committee member Dr. Shekhar Koirala, on January 19, 2015, similarly noted that the persisting disagreements are related to the name, boundaries, and number of States.

Not surprisingly, Nepal is currently threatened by political turmoil. In a clear manifestation of growing political volatility in the Republic, opposition members of the CA, led by UCPN-M, vandalized Parliament and attacked ruling party leaders and security staff, leaving four security staff members injured, on January 20, 2015. Again, on January 22, 2015, opposition CA members threw microphones and shoes at the members of the ruling alliance. On this day, protests also erupted across Nepal, in which several persons were injured and a substantial quantum of property was damaged. In fact, as the deadline for the Constitutional draft approached, protests andbandhs (general strikes) became the order of the day. Significantly, during one suchbandh enforced by the UCPN-M-led alliance, which turned violent in several parts of the country, a protester, identified as Rajaram Jha (25), died at Bhramarpurachok in Dhanusha District on January 12, 2015.

The violence inside Parliament as well as on the streets was allegedly a response to the ruling alliance's attempt to pass the charter of the new Constitution through majority vote, as no consensus could be reached. The 10-party ruling alliance has the two-thirds majority in Parliament that is needed to approve the Constitution, without the support of the UCPN-M led opposition.

Violent protests continue even now. The opposition alliance has also decided to launch 'phase-wise protests' starting from February 11, 2015, even as daily threats of "revolution" are issued. Bhattarai, for instance, declared, "We believe the CA has of late been hijacked by regressive forces. This hijacked CA functions more like a Parliament. We believe there is a need for a new revolution to convert this Parliament into Constituent Assembly. But if this state of hijack does not end, history will take a new turn. The oppressed and marginalized communities will once again revolt."

Political parties in Nepal have shown little sagacity over the past years, keeping Nepal teetering on the brink of enveloping disorders. There will now be political pressure on Prime Minister Koirala to resign on moral grounds, since the Constitution drafting deadline has again been missed, a point conceded by NC Central Working Committee member Dr. Shekhar Koirala. But this will do nothing to resolve the enduring crisis in Nepal, as the electoral mandate would continue to lie with the ruling alliance, and there would be no movement forward to resolving the contentious issues of the elusive new Constitution.

On February 3, 2015, Prime Minister Koirala asserted that the Constitution drafting process would not stop because of threats, bragging and blackmail by UCPN-M, and observed, "The UCPN (Maoist) will not get public support if they quit CA and decide to go for protest. People want development and political stability. They will not support Maoists' agenda."

Indeed, the massive turnout of 78.34 per cent in the CA elections of 2013 - far above the record turnout of 68.15 per cent in the General Elections of 1991 - demonstrate the overwhelming public aspiration for peace, order and democratic governance, and any political formation betraying popular will is unlikely to secure significant support. Nevertheless, the persistent deadlock over the Constitutional draft can undermine thesurge of optimism that followed the 2013 Election, and will push the country towards increasing uncertainty.