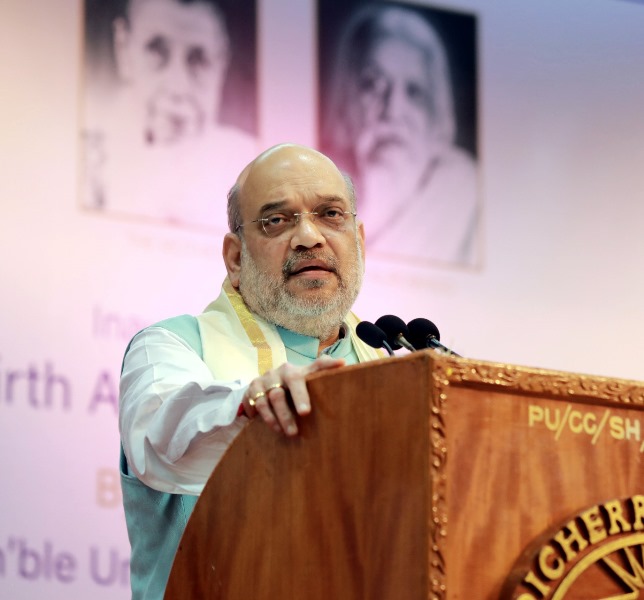 Government of India, under the leadership of Prime Minister Narendra Modi, in the last eight years, has achieved a huge success in finding a permanent solution to three problems - terrorism in Kashmir, Left Wing Extremism and Narcotics and Armed Groups in the North East - which had been a threat to internal security for many years. By addressing them in this way, great success has been achieved in their solution. A new era of euphoria and development has begun and today the commanding supremacy of our security agencies against terrorism is visible, along with this Left-Wing Extremism is also moving towards an end. This change has come about due to analyzing and understanding the problem, after thoroughly discussing its remedies, work has been done on the basis of a strategy.

Analysis of theater-wise data on violence comparing the year 2013 and 2021 provides interesting insights.

These datasets indicate that UHM’s assessment that India under his Government “has achieved a huge success in finding a permanent solution to three problems - terrorism in Kashmir, Left Wing Extremism and Narcotics and Armed Groups in the North East…” is somewhat hyperbolic. While there has been definite improvement in some theatres – essentially realizing the trajectory that had been established in the decade past, none of these problems appear to be close to any ‘permanent solution.’ The UHM’s assertions are in keeping with his government’s persistent and deliberate neglect of facts and figures in almost all spheres of administration.

Notwithstanding the theatrics surrounding ‘surgical strikes’ and Article 370, there has been little genuine effort at policy level to resolve the issue of Pakistan-backed terrorism in J&K. Rather, the politics of polarization has been brought centerstage and has jeopardized earlier gains secured at the cost of extreme sacrifices made by the Security Forces (SFs). Indeed, Kashmir had established trend of continuously declining fatalities between 2002 and 2012, and there was no reason why this trend would not have continued, were it not for the increasing stridency and divisiveness of politics thereafter. From a low of 121 fatalities in 2012, fatalities were pushed up to a high of 452 in 2018, and were still more than double, as compared to 2012, in 2021 when 274 were recorded.

In all fairness, any ‘permanent solution’ to the terrorism problem in J&K is unlikely as long as Pakistan keeps the jihadi pipeline flowing. Moreover, at the policy level, unless the Bharatiya Janata Party (BJP)-led Union Government, which also controls the Union Territory through the Lieutenant Governor of J&K, adopts policies and initiate action to ensure that the present patterns of polarizing politics are suppressed in the Union Territory, even as efforts to restore the democratic set-up commence at the earliest, there can be little hope of any enduring solution. The steady campaigns that have been deepening communal fault lines can only help Pakistan’s Inter-Services Intelligence (ISI) and its terrorist proxies to keep a level of turbulence going in J&K.

Clearly, there are at least 25 Districts in the country that are still deemed to be at considerable risk, and a number of others where Maoist stragglers remain active.

While the biggest gains have been made in terms of insurgencies in northeast where fatalities came down at the lowest ever, 27, in 2020, there was a spike in 2021, with fatalities increasing to 72. In particular, in the civilian category, fatalities increased from a low of five, to 21, the highest since 2017, when there were 35 civilian fatalities. More worryingly, the threat from the mother of all insurgencies in the Northeast, the Naga movement, still persists, as talks between the Government and Naga groups drag on, with no signs of any foreseeable resolution. The other potent terrorist formation, the United Liberation Front of Asom–Independent (ULFA-I), after a brief unilateral ‘ceasefire,’ has returned to terror tactics.

An enormous price has been paid by the SFs and the people of the Northeast to secure the relative peace that presently prevails, but the current political dispensation has displayed a lack of wisdom. Political opportunism has undermined its ability to bring permanent solutions to the lingering challenges of the region, even as the politics of polarization alienates many who were close to integration with the mainstream. Tripura is, in fact, the best example, where insurgency was almost completely wiped out by a strategic campaign led by Tripura Police. However, the polarized politics surrounding Citizenship Amendment Act/National Register for Citizens (CAA)/NRC, as part of core Hindutva agenda, has given rise to a retaliatory demand for tribal unity and the creation of ‘Greater Tipraland.’ Indeed, the anti-CAA/NRC issue had engulfed a large part of the region and people had come onto the streets in large numbers. As violent protests intensified and reports of popular disenchantment became frequent, the Central Government was forced to go slow on the implementation of the Citizenship Amendment Act. On April 8, 2022, the Union Ministry of Home Affairs (UMHA) sought another six-months (the fifth such extension) from both the Lok Sabha and Rajya Sabha, to frame the rules of the CAA. The protests also came to a halt as Memorandums of Understanding (MoUs) with militant ethnic groups such as the Bodo and Karbi were signed, with the Government conceding that it would allow the Inner Line Permit system of restricted entry to be extended to Manipur, and, possibly, other States of the Northeast as well.

Even as the impact of the earlier polarizing campaigns has been contained for the time being by these mechanisms, the Union Government has released its latest salvo, by trying to make Hindi a compulsory subject up to Class 10 in all states, including the Northeast region. Various organisations across the Northeast have dubbed the move 'cultural imperialism,' and have promised to resist its implementation. The Axom Sahitya Sabha, an Assam-based literary organization, declared,

Such steps spell a bleak future for Assamese and all indigenous languages in the North East. The Sabha demands that the decision to make Hindi mandatory till Class 10 be revoked.

Meanwhile, Islamist terrorism outside J&K has been kept under check. While 2013 had recorded 31 fatalities from four districts, no fatality was recorded in 2021. Yet, the threat from this form of terror continues, as is evident from the regular reporting of the discovery and neutralization of sleeper cells from across India. At least 67 Islamist terrorists have been arrested outside J&K in 2021.

More worryingly, the situation in Punjab, where the ISI has intensified its activities, has become more tense under the current regime at the Center. In the eight years since Prime Minister Narendra Modi assumed power, Punjab has recorded 53 fatalities (18 civilians,11 SF personnel and 24 terrorists) in 20 incidents of killing. During the preceding comparable period, there were four incidents of killing in which 13 people (seven civilians, two SF personnel and four terrorists) had died. Moreover, the issue of the ‘controversial farm laws’ provided the US-based Sikhs for Justice, a banned terror group in India, a base to project its separatist agenda and play the communal card. Though SFJ’s campaign was explicitly rejected by the protesting farmers, and the group largely failed in its design, its propaganda campaigns secured much wider circulation, even as Hindutva groupings as well as some ruling party proxies sought to project the farmers’ agitation as a ‘Khalistani plot.’ Significantly, the National Investigation Agency (NIA) has been assigned 16 cases relating to alleged Khalistani terrorism since 2019, including one in 2022. Communal volatility, which has been brought to the centerstage across India, is also likely to be exploited by Pakistan and by radicalized elements in the Sikh Diaspora, to further fund and incite violence, as well as to exploit any emerging disorders.

On operational level, the security establishment still lacks adequate manpower and facilities, particularly in the Police force, the first line of defense against such threats. According to the latest data made available by the Bureau of Police Research and Development (BPR&D), as on January 1, 2020, India’s actual police-population-ratio (policemen per hundred thousand population) was at 155.78 as against the sanctioned strength of 195.39, which itself is inadequate.  The actual Police-area ratio stood at 63.63 as against the sanctioned of 79.80.

The sanctioned strength of Indian Police Service (IPS) Officers, the apex decision making body, was 4,982 at the all-India level, whereas 4,074 officers were actually available. Further, 376 officers were on deputation with the Central Government. Moreover, 17,436 Police personnel were actually deployed in Criminal Investigation Department/Crime Branch against the sanctioned strength of 23,823.

In terms of facilities available, transport facility (number of vehicles) available per 100 sanctioned police personnel was 7.74 in the year 2019 at the national level, marginally lower than 7.89 in the previous year. In all, 202,925 vehicles were available with State/Union Territory Police Force in 2019, while there were 204,807 in 2018.

The overall security situation the country has certainly continued to improve due to the work done by the SFs on the ground, over the past decades. However, no genuine initiatives have been introduced in good faith to secure an enduring solution to any one of the problems flagged by UHM Shah. Indeed, political opportunism and sustained polarization for short term electoral gains have created an environment that has the potential of undermining the extraordinary work done the SFs.