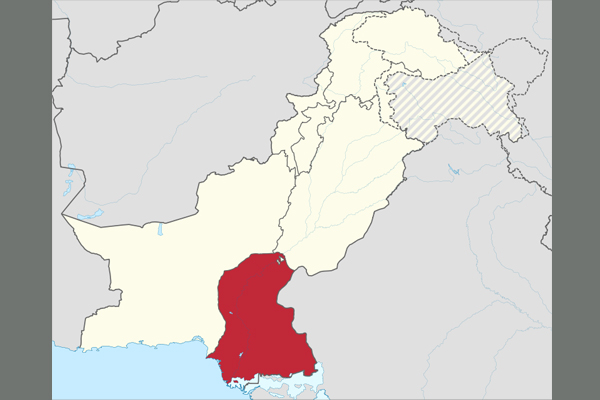 By Ambreen Agha | | 03 Feb 2015, 12:39 pm
#Sindh, # Permanent Crisis
Research Assistant, Institute for Conflict Management ...Violence in Karachi has become so commonplace that reports of ever more gruesome excesses against the citizens are usually taken in the stride...

At least 61 Shias were killed and more than 50 others were injured in a bomb attack on Karbala-e-Moalla Imambargah (Shia place of commemoration) in the Lakhidar area of Shikarpur District in the Sindh Province on January 30, 2015. More than 300 worshippers were inside the double-storey compound of the Imambargah and the prayer leader, Maulvi Tanveer Hussain Shah, was delivering the Friday sermonwhen the bomb exploded. The 'spokesman' of Jundullah, a splinter faction of Tehreek-e-Taliban Pakistan (TTP), Ahmed Marwat, declared, "We claim responsibility for attack on Shias in Shikarpur very happily. Our target was the Shia community. They are our enemies."

On December 22, 2014, a Police team of District Malir killed 13 al Qaeda and TTP terrorists during a shootout in the Deluxe Town bungalows of the Sohrab Goth area in Gadap Town, Karachi, the provincial capital of Sindh. However, TTP 'commander' Khan Zaman Mehsud and some of his associates managed to flee under the cover of fire.

According to partial data compiled by South Asia Terrorism Portal (SATP), Sindh has already recorded 133 fatalities in 2015, including 99 civilians, nine Security Force (SF) personnel and 25 terrorists in 2015 (data till January 31, 2015) and remains the second worst terrorism-affected region across Pakistan in terms of such fatalities. The Federally Administered Tribal Areas (FATA) ranks first, with 249 killed, including nine civilians, 15 SF personnel and 225 terrorists.

Sindh, however, has recorded the highest number of civilian fatalities, at 99, over this period, followed by 12 in Punjab, nine each in Balochistan and FATA, and eight in Khyber Pakhtunkhwa (KP).

According to SATP data, this has been the trend since 2011, with Sindh ranking second worst across Pakistan in terms of overall fatalities (after FATA), while recording the highest number of civilian fatalities in terrorist violence. Terrorist attacks, sectarian and political violence, and gang wars are the three patterns of violence that dominate Sindh.

Meanwhile, as in previous years, Karachi remained the worst affected among Sindh's 23 Districts. Of the total of 1,180 fatalities in Sindh through 2014, at least 1,135 fatalities (96.18 per cent) were registered in Karachi alone, followed by 13 in Hyderabad District, 12 in Kashmore, six in Jacobabad, five in Khairpur, four in Sukkur, two each in Jamshoro and Ghotki, and one in Mirpurkhas.

The worsening situation in Karachi has been exacerbated by the presence of a wide range of sectarian-terrorist outfits operating in the city. These prominently include TTP, Lashkar-e-Jhangvi (LeJ), Sipah-e-Sahaba-Pakistan (SSP), Jundullah, Jaish-e-Mohammad (JeM), Sunni Tehreek (ST) and Sipah-e-Muhammad Pakistan (SMP), among many others. Unsurprisingly, barring two fatalities in Hyderabad District and one in Mirpurkhas, all 83 killings in 52 sectarian attacks in Sindh Province occurred in Karachi alone.

Pakistan's Government did little in 2014 to stop the rising toll of killings and repression by extremist groups that target religious minorities...The Government is failing at the most basic duty of government - to protect the safety of its citizens and enforce rule of law.

Targeted political killings have also been a rising trend in the provincial capital. Activists of the Pakistan People's Party (PPP), the Muttahida Qaumi Movement (MQM) and the Awami National Party (ANP) have been the principal targets, with a total of 391 activists of these parties, including 221 of MQM, 106 of ANP, and 64 of PPP, killed since 2011. 46 of these, including 30 MQM, and eight each of ANP and PPP, were killed in 2014 alone. Moreover, political parties have also drawn the ire of TTP and its splinter groups. On November 21, 2014, at least 23 people, including three MQM Members of Provincial Assembly (MPA) were injured in a blast at a MQM membership camp in Orangi Town, Karachi. TTP-Jama'at-ul-Ahrar (TTP-JuA) 'spokesman' Ehsanullah Ehsan while claiming responsibility for the attack on hisTwitter account, declared that the attack on MQM was part of the drive against ANP, MQM, PPP and Pakistan Muslim League-Nawaz (PML-N), and warned, further, that such attacks on these parties would continue.

In another such attack, on November 23, 2014, the District West President of the ANP, Dr. Ziauddin (50), was shot dead while travelling back to his home from the mosque after offering Isha (evening) prayers in Frontier Morr of Orangi Town. TTP-Hakeemullah Mehsud group 'commander' Gilaman Mehsud claimed responsibility for Ziauddin's assassination, and warned, "Since ANP is a secular party, which is aiding the law enforcers in arresting TTP operatives in Karachi, they are attacking its leadership and will continue to do so in future." Ziauddin had earlier been threatened and attacked by TTP. On September 28, 2013, he had escaped a bomb attack outside his residence in Frontier Morr. The attack was the result of non-compliance to an extortion demand of PKR 1 million by TTP. The TTP had, moreover, demanded that he quit ANP, and had warned him of dire consequences if he did not comply.

Turf wars between two prominent criminal gangs, the Uzair Baloch-led People's Amn Committee (PAC, People's Peace Committee) and the Ghaffar Zikri-led Lyari gang, and their multiple local wings, are another aspect of the endemic violence in Karachi. Despite being banned, these criminal formations continue to operate with the support of their political patrons. The PAC is alleged to be supported by PPP and the Zikri group operates in collusion with MQM.

In the most recent targeted operation against the gangsters, on February 1, 2015, SFs killed five criminals in an encounter in the Salar Goth area of Malir Town in Karachi. They were identified as Akbar Maliri, Khalid Lashari, Sheraz Ibrahim akaComrade of Malir, Gulab Hasan aka Peero, and Yousuf Pathan. Akbar Maliri, was stated to be the main character in the gang warfare in parts of Malir and belonged to the Uzair Baloch group. Maliri was also allegedly involved in a grenade attack at a ground near Salar Goth on January 26, 2015, in which a man was killed and another 12 were injured. These gangsters were described as "the symbol of terror in the city" and had been involved in numerous murders and other crimes.

The cumulative impact of these multiple patterns of violence has made Karachi "the most dangerous megacity" in the world, according to a Foreign Policy report. The report cited a murder rate of 12.3 per 100,000 residents, "some 25 per cent higher than any other major city".

Fearing a spill-over of violence into other parts of the Province, Sindh Chief Minister Syed Qaim Ali Shah, had cautioned, on February 24, 2014, "Karachi-like terrorism must not hit other parts of Sindh. Terrorism should not make its way into the interior of Sindh with the intensity witnessed in Karachi." Significantly, Hyderabad, Jacobabad, Kashmore and Khairpur Districts had each witnessed one major incident in 2014. On July 6, 2014, at least three Policemen were killed and two others were injured by unidentified assailants in Latifabad area of Hyderabad city of Hyderabad District. A major incident occurred in Jacobabad District on February 16, 2014, when two coaches of the Peshawar-bound Khushhal Khan Khattak Express derailed after a bomb attack on the tracks near a canal in Thull town of the District. Six people, including four children, were killed and more than 35 were injured. In Kashmore, at least 10 terrorists were killed while some 50 suspects were arrested, when SFs launched an operation in Jani Bheeri village on June 4, 2014. The extremists killed in the operation were involved in the killing of two Rangers near the Bhittai Colony Road in the limits of the Tangwani Police Station in Kandhkot town of the District, on June 3, 2014. In another encounter in Khairpur District, Police shot dead four alleged abductors and safely rescued the hostage, Dr Riaz Bhatti, on December 21, 2014. These attacks indicate the dispersion of the TTP in other parts of Sindh, potentially creating a far greater challenge. In 2013, only two Districts - Hyderabad and Sukkur - had each witnessed one major incident.

In the face of violence and targeted murders, the Federal Government launched a Rangers-led targeted operation against militants and criminals operating in Karachi on September 5, 2013. The operation still continues, but has had little impact on overall security. Assessing the law and order situation in Karachi, a fact-finding mission of HRCP concluded, on July 21, 2014, that the operation launched in September 2013 had failed, and that the "objectives of the operation have not been met". HRCP Secretary General I.A. Rehman lamented that the operation had been launched on an "ad hoc basis without appropriate planning," and noted,

Throughout the operation nothing has been done to enhance the capacity of the Police, with the result that the ad hoc measure has essentially become open-ended and indefinite. A working chemistry that should have been there between the Police and Rangers was still missing. The Police were not conducting any operation in Karachi but were merely engaging in proactive policing.

Meanwhile, authorities have been to struggle unsuccessfully to de-weaponize Karachi since 1993. Ironically, on March 30, 2014, in the aftermath of rising incidents of targeted killings of doctors in Karachi, the administration agreed that all doctors would be facilitated to secure weapons' licenses for their personal protection and would be trained in the proper use of weapons. Doctors would also be allowed to carry their weapons without any legal or administrative hindrance. In an article published in The News on February 1, 2015, journalist Syed Arfeen, observed,

The fragile law and order scenario has developed a potential market for illegal arms and ammunition. It is a huge market spanning from (sic) warlords to private militias, militant organisations to groups affiliated to political parties, drug peddlers to land grabbers. Everyone needs a toy to establish its (sic) authority - and the state and the kingpins of illegal weapons provide this pivotal service at their doorstep.

Karachi has been in a state of crisis for decades now. Its increasing fragility has the potential of transforming into a civil war, engulfing the entire Province, and dispersing into the country at large. The latest incident at Shikarpur demonstrates the increasing penetration of TTP and its murderous factions into other Districts of Sindh.

It is, once again, the criminalization of the state in Pakistan, and the unwillingness to abandon Islamist extremism and terrorism as instruments of state policy, that have resulted in the unbridled and self-destructive violence in Sindh. With the consolidation of the power bases of various armed extremist formations in Karachi - and progressively in other areas of Sindh - the situation is bound to deteriorate further.