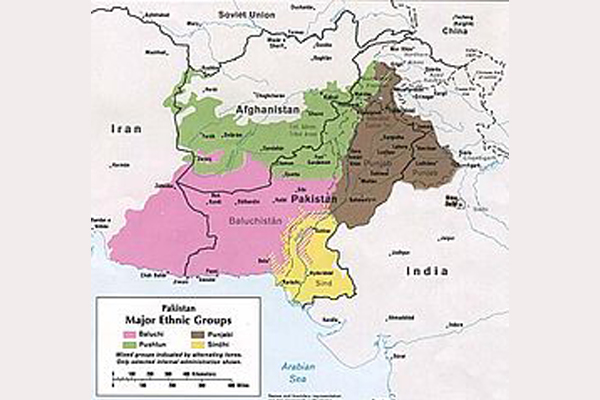 On March 7, 2017, militants targeted an Army vehicle with an Improvised Explosive Device (IED) in the Awaran District, killing one soldier. Sources disclosed that unidentified militants had planted an IED on the roadside, which they detonated with a remote control device while targeting the security vehicle.

On February 28, 2017, at least three FC personnel and one civilian were injured in an IED blast on the Sariab Road in Quetta, the provincial capital of Balochistan. The bomb, which was planted on the roadside, targeted an FC vehicle while it was on patrol. The explosion left the vehicle partially damaged.

On February 16, 2017, three Army personnel were killed when an IED, targeting an Army convoy, exploded in Awaran town. The dead were identified as Captain Taha, Sepoy Kamran Satti and Sepoy Mehtar Jan. Another two soldiers were also injured in the attack.

The terrorist violence against Security Force (SF) personnel in Balochistan during the first 75 days of 2017 was just a continuation of the targeted killings that had seen an escalation through 2016. While the civilian and militant categories saw just five and six fatalities, respectively, in this period in 2017, at least 12 SF personnel were killed in 15 incidents of militant-orchestrated attacks. 2016 saw the highest fatalities among SFs over the preceding five years, with 153 killed. According to partial data compiled by the South Asia Terrorism Portal (SATP), of the 153 SF personnel killed in 2016, 131 lost their lives in Northern Balochistan, while the remaining 22 were killed in Southern Balochistan.

While the province recorded a surge in SF fatalities through 2016, overall fatalities registered a marginal .31 per cent decrease. According to the SATP database, Balochistan recorded 633 fatalities through 2016, including 251 civilians, 229 militants and 153 SF personnel; in comparison to 635 total fatalities, including 298 militants, 247 civilians and 90 SF personnel in 2015. 2016 had been a year of mixed trends in different categories in comparison to the previous year. While militant fatalities declined by 23.15 per cent, SF and civilian fatalities registered an increase of 70 per cent and 1.61 per, cent respectively.

While the overall fatalities had recorded a meagre diminution, the major proportion of these fatalities came in the form of suicide attacks. The number and lethality of suicide attacks in Balochistan increased considerably, from just one such incident resulting in two fatalities in 2015, to seven attacks in 2016 resulting in 224 deaths and 434 injuries. The most deadly of all suicide blast came on August 8, 2016, when a suicide bomber blew himself up at the emergency ward of Quetta's Civil Hospital, killing at least 74 persons and injuring another 100. 74 persons includes 55 lawyers who had gathered at the hospital to mourn the death of BBA President Bilal Anwar Kasi in a gun attack earlier in the day.

Two other prominent suicide attacks of the year were:

November 12, 2016: At least 52 persons were killed and another 102 were injured in suicide attack at the shrine of Shah Norani in Khuzdar District.

October 24, 2016: At least 61 SF personnel were killed, and another 164 were injured as terrorists stormed the New Sariab Police Training College (PTC), some 13 kilometres away from Quetta, in the night.

These trends nullify the Government's claim of 'containing militancy' through the implementation of National Action Plan (NAP). This is despite the fact, as the Balochistan Home Department disclosed on August 20, 2016, that 13,575 terrorists were arrested and 337 were killed in some 2,825 operations in the Province in 2015-16. The Home Department issued a report over progress in the implementation of NAP. According to the report, 4,223 different types of guns and 248,327 bullets and mortar shells were seized until August 2016 since January 7, 2015.

Meanwhile, the increase in civilian and SF categories was the result, on the one hand, of the extra-judicial killings of civilians by SFs, and the retaliatory target killing of SF personnel by the ethnic Baloch insurgents. Through 2016, at least 251 civilians were killed in Balochistan, of which some 138 were attributable to one or other militant outfit. The remaining 113 'unattributed' fatalities were overwhelmingly the work of the State apparatus and its surrogates. Of the 3,815 civilian fatalities recorded in Balochistan since 2004 [data till March 19, 2017], at least 1,051 civilian killings are attributable to one or other militant outfit. Of these, 361 civilian killings (205 in the South and 156 in the North) have been claimed by Baloch separatist formations, while Islamist and sectarian extremist formations - primarily LeJ, TTP and Ahrar-ul-Hind (Liberators of India) - claimed responsibility for another 690 civilian killings, 631 in the North (mostly in and around Quetta) and 59 in the South. The 363 civilian killings attributed to Baloch formations include at least 155 Punjabi settlers since 2006. The remaining 2,764 civilian fatalities - 1,668 in the South and 1,096 in the North - remain 'unattributed'. A large proportion of the 'unattributed' fatalities, particularly in the Southern region, are believed to be the result of enforced disappearances carried out by state agencies, or by their proxies, prominently including the Tehreek-e-Nafaz-e-Aman Balochistan (TNAB, Movement for the Restoration of Peace, Balochistan). The large and continuously mounting number of unattributed civilian fatalities reconfirms the widespread conviction that Security Agencies engage in "kill and dump" operations against local Baloch dissidents, a reality that Pakistan's Supreme Court has clearly recognized.

Nearly 1,000 bodies of political activists and suspected separatists have been found in the restive Balochistan province over the past six years, according to the Pakistan Government's official figures. A media report noted, "According to the Federal Ministry of Human Rights, at least 936 dead bodies have been found in Balochistan since 2011." Most of the bodies were dumped in the regions of Quetta, Kalat, Khuzdar and Mekran - areas where Balochistan's separatist insurgency has its roots. Rights activists said the figures pointed to large-scale extrajudicial killings, the report added. Relatives assert most of the victims were picked up by security agencies. Thousands of people have disappeared without trace in Balochistan since a separatist insurgency gained momentum in 2007. A military-led operation was launched in early 2005 to counter the uprising by ethnic Baloch groups, who want a greater say in decision-making and exploitation of the Province's abundant natural resources, such as minerals and gas.

The Voice for Baloch Missing Persons (VBMP) has recorded 1,200 cases of dumped bodies and asserts that there are many more it has not been able to document. VBMP chief Nasrullah Baloch added that most of the bodies "are of those activists who have been victims of 'enforced disappearances' - people who are picked up by authorities and then just go missing". His allegations were largely in line with a 2013 report by the independent Human Rights Commission of Pakistan (HRCP) that recorded "credible reports of continued serious human rights violations, including disappearances of people, arbitrary arrests, torture and extrajudicial killings".

Meanwhile, the claim of the Federal Government's 'Commission of Inquiry on Enforced Disappearances' added salt to the wounds of the Baloch people. The Chairman of the Commission, retired Justice Javed Iqbal, told a Senate standing committee on December 19, 2016, that only 96 people were missing in Balochistan and the matter had been politicised.

The situation in Balochistan is as grave as ever. Pakistan's military operations have been continuing unabated. The Army Chief, the Prime Minister and the stooge ministers, who are sitting in the Baloch Cabinet had a meeting and they agreed on a National Action Plan to further isolate Baloch activists, freedom-loving nationals and the population from the rest of Pakistan, and certain other elimination process of genocide through a plan called the National Action Plan.

The pro-Government Balochistan National Party-Mengal (BNP-M) also underlined the prolonged Baloch discontent. BNP-M president Sardar Akhtar Jan Mengal asserted, on March 5, 2017, that successive rulers of the country over the preceding 70 years had given nothing to the people of Balochistan, except hunger, poverty, unemployment and lawlessness. He alleged that the rulers had deliberately kept Balochistan backward. The rulers had never paid attention to the development of Balochistan and deprived its people of their due rights, including their share in the natural resources of their own Province. He claimed that no development could be seen in Balochistan under the China-Pakistan Economic Corridor (CPEC), and that this project would not benefit the people of Balochistan, as not a single development project had been launched in the region as part of the mega project.

Dubbing China as a 'great threat' to the Baloch people, UNHRC Balochistan representative Mehran Marri said that "China really-really is spreading its tentacles in Balochistan very rapidly, and therefore, we are appealing to the international community. The Gwadar project is for the Chinese military. This would be detrimental to international powers, to the people's interest, where 60 percent of world's oil flows. So, the world has to really take rapid action in curbing China's influence in Balochistan in particular and in Pakistan in general." Asserting that CPEC would convert the Baloch people into minorities in their own homeland, Noordin Mengal, a human rights campaigner from Balochistan, stated that, with an influx of outsiders as a result of the project, the identity of the Baloch was being threatened.

Concern about demographic changes in Balochistan was reiterated in a report by the Federation of Pakistan Chambers of Commerce and Industry (FPCCI) on December 28, 2016, which noted that, at the current rate of influx of Chinese nationals into Balochistan and after completion of the CPEC, the native population of the area would be outnumbered by 2048. The report added that, conservatively, 0.44 persons per thousand migrate from china because of economic reasons, resulting in an inflow of more than 600,000 people per year in Pakistan. At present, the Baloch are 55 per cent of the total population of Balochistan. The current growth rate of Balochistan's population is 2.36 per cent. On the existing rate of migration from China at 0.44 persons per thousand and rate of population growth at 0.43 per cent, the share of Chinese in Balochistan's population is destined to accelerate with the completion of the CPEC. Incoming investors and settlers have better capacities to offer attractive prices for land acquisition - often exceeding the growing market value. The unskilled people of the province will face increasing challenges in maintaining their lives without land ownership, their only productive asset, the report observed.

Moreover, while Balochistan is the starting point of the CPEC, the lion's share of the project has been assigned to Punjab, according to Federal Ministry of Interior statistics shared with the Parliament on September 2, 2016. At present, 53 per cent of the total projects are assigned to Punjab. According to official statistics, out of the total of 330 projects, 176 are in Punjab while only eight projects have been allocated for Balochistan.

This has also upset the Baloch people. Balochistan Republican Party on September 3, 2016 alleged that Balochistan's abundant resources were being diverted for the benefit of Pakistan's dominant province, Punjab. Munir Mengal, the President of Baloch Voice Foundation, asserted, on March 13, 2017, that CPEC was a 'strategic design' by Pakistan and China to loot Balochistan's resources and eliminate their culture and identity.

The Federal Government is trying to 'solve' the problem of Baloch discontent through demographic re-engineering, instead of addressing the challenges of development and justice, settling large numbers of workers from the other Provinces in Balochistan, and providing land and a range of facilities to 'outsiders' there. On September 8, 2015, in a meeting of the Senate's Standing Committee on Interior, Senator Jehanzeb Jamaldini observed:

The government settled four million people in various parts of Balochistan in the past three decades. With broader demographic changes in the province, the Government is converting the majority into a minority.

The Aghaz-e-Haqooq-e-Balochistan (Beginning of the Rights of Balochistan) package, which was launched by then Prime Minister Yousaf Raza Gillani with much fanfare on November 23, 2009, has proved an eyewash. On its own admission, the Government has only been able to implement 15 of the 61 proposals contained in the package - and the success of these 15 has also been challenged.

Islamabad has pursued a predatory policy with regard to the people and resources of Balochistan for decades, and there is no present indication that this is beginning to change. If anything, things are getting worse.