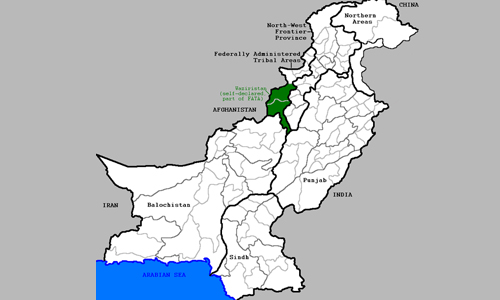 South Asia Intelligence Review | | 19 Jul 2014, 06:10 pm
#Uzbek Challenge
Tushar Ranjan Mohanty/Research Associate, Institute for Conflict Management On July 7, 2014,Security Forces (SFs) involved in the ongoing military operation, Zarb-e-Azb [Sword of the Prophet], in the North Waziristan Agency (NWA) of the Federally Administered Tribal Areas (FATA), have so far killed a total of 391 alleged terrorists. 19 troopers have also lost their lives during the Operation that began at 01:30am [PST] on June 15, 2014. A total of 61 terrorist hideouts have been neutralized.

Reports suggest that the Operation has primarily targeted the Hafiz Gul Bahadur faction of the Tehrik-e-Taliban Pakistan (TTP-Hafiz Faction), which has just come out of the truce pact with the Government signed back in 2006, and the Islamic Movement of Uzbekistan (IMU). While the TTP-Hafiz Faction has been targeted because it has turned renegade, the IMU is being targeted because of its blatant claim to having attacked the Karachi Airport on June 8-9, 2014, in which at least 33 persons, including all ten attackers, were killed, as well as its recent record.

Claiming responsibility for the attack, the IMU posted a statement that read, "...This is revenge for the killing of civilians, migrant women and their children. This is revenge for the violence of the corrupt Pakistani Government." The statement signed by Usman Ghazi, IMU emir, concludes, "The jihad already in place in Afghanistan should be extended to Pakistan's territory as well. Jihad in Pakistan should be fought by the entire Muslim Ummah and not just a few people or groups." Pakistani Major General Rizvan Akhtar, speaking on the day of the attack, had claimed that there were Uzbeks among the suicide fighters in Karachi, and some reports claimed that most of the slain terrorists were Uzbeks. TTP had also claimed responsibility for the attack.

It was claimed that the attack on Karachi Airport was retaliation against the May 21, 2014, aerial attack by the military in NWA. At least 60 terrorists, mostly Uzbek, were killed in those attacks.

The Karachi Airport attack was not first of its kind in which direct involvement of Uzbek terrorists had been established. Prominent among such attacks were the following:

July 30, 2013: At least 24 persons, including 12 Policeman and four prisoners, were killed and nine others were injured when around 150 terrorists, including Uzbeks, stormed the Central Prison at Dera Ismail Khan in the Khyber Pakhtunkhwa (KP) Province. More than 243 prisoners were set free. Police later re-arrested 48 prisoners.

December 15, 2012: Nine persons, including five terrorists and four civilians, were killed and another 40 were injured, when a group of terrorists, including Uzbeks, attacked Bacha Khan International Airport in Peshawar, KP.

April 15, 2012: Around 200 terrorists, including Uzbeks, stormed a prison in Bannu town in Bannu District of KP and freed 384 inmates, including one on death row for trying to assassinate former President General (Retd.) Pervez Musharraf. KP Home Secretary Azam Khan later disclosed that, out of the 384 prisoners who had fled the jail, 108 had voluntarily returned while another 35 had been arrested by law enforcement agencies.

May 22, 2011: 18 SF personnel were killed when four Uzbek terrorists orchestrated a suicide attack on the PNS Mehran at Shahrah-e-Faisal in Karachi, the provincial capital of Sindh. Two P3C-Orion surveillance aircraft of the Pakistan Navy were destroyed, while a third was damaged in the attack.

Though the IMU has declared no particular ideological hostility towards the Pakistan Army or Government, their continuous association with the TTP and al Qaeda fraternity, and the losses they have suffered during military operations, have pitted them against the state.

Even as Operation Zarb-e-Azb was launched, Pakistani authorities began to proclaim its 'success'. On June 16, 2014, an unnamed Pakistan intelligence official stated, "Up to 150 people were killed during the strikes early Sunday [June 15]. These strikes were carried out based on confirmed reports about the presence of Uzbek and other terrorists in the area." An Inter Services Public Relations (ISPR) Press Release asserted that terrorists linked to the attack on Karachi Airport were present in the hideouts that had been bombed. Abu Abdur Rehman Almani, a key 'Uzbek commander', and alleged mastermind of the Karachi Attack, was killed in the first day of Operation Zarb-e-Azb. There has been no independent verification of these claims.

According to the Foreign Military Studies Office, a research and analysis centre for the US Army, the IMU was established by Tahir Yuldashev and Juma Namangani in 1998 in Uzbekistan, and declared jihad against the Governments of Uzbekistan and Kyrgyzstan. Their ultimate goal was to overthrow the secular government of President Islam Karimov and establish an Islamic caliphate in Uzbekistan. The IMU later established links with the Afghan Taliban as well as al Qaeda. After moving to Northern Afghanistan, following Uzbek Army raids on their bases, Yuldashev took an 'oath of allegiance' to Afghan Taliban chief Mullah Omar. Juma Namangani was killed in Afghanistan in November 19, 2001, while fighting for Kunduz town. His death left Yuldashev solely in command. The IMU managed to survive US air strikes after 9/11, although it was considerably weakened. Tahir Yuldashev successfully re-organised the group in the tribal areas of North and South Waziristan over subsequent years.

Having initially settled in South Waziristan, Yuldashev became "a star speaker" in local mosques. He adopted al Qaeda's agenda and turned the IMU into one of the strongest non-Arab al Qaeda groups. The IMU also established close ties with the TTP.

In 2007-08, with the backing of the Pakistan Army, pro-government TTP leader Mullah Nazir (the then South Waziristan TTP chief) started fight against IMU militants in South Waziristan Agency. During the period, at least 250 Uzbeks were killed and hundreds fled to NWA and Afghanistan.

On August 27, 2009, Tahir Yuldashev was killed in a US drone attack in South Waziristan. His 'deputy' Abu Usman Adil became new IMU head, but was also killed in a drone attack on April 29, 2012, in Miranshah, NWA. According to The Long War Journal, Adil augmented IMU's profile in Pakistan and Northern Afghanistan after Yuldashev's death and developed strong ties with TTP. After Adil's elimination, his 'second-in-command', Usman Ghazi took control of IMU, and currently heads the outfit.

After Mullah Nazir was killed in a US drone attack on January 2, 2013, Uzbek terrorists once again started regaining strength in SWA.

Based on its relations with TTP, IMU now has sanctuaries in the Mir Ali area of North Waziristan. Both terrorist groups have joined hands to launch deadly attacks in Pakistan. Worryingly, media reports indicate, more than 5,000 Uzbek terrorists from the IMU have taken shelter in the North and South Waziristan Agencies. Indeed, former Inter-Services Intelligence (ISI) official, Asad Munir, tweeted on June 25: "Mosakai, a village in Mir Ali area of NWA had so many Uzbek, that the village was known as Uzbekistan."

As with past military operations against terrorist formations in Pakistan, sufficient prior warning was available, and a mass exodus of foreign, especially Uzbek, terrorists began before the start of Operation Zarb-e-Azb, creating the danger of these terrorists simply shifting to other parts of the country. Balochistan, which shares a porous border with the region, is under imminent threat. Naveed Khalid, a senior intelligence official based in Islamabad, conceded, "Our internal security wing . revealed that a large number of IMU terrorists have fled [North Waziristan] and reportedly entered Balochistan to hide among traders, merchants and labourers in Zhob and adjacent areas in the Province... We have intercepted several calls . which disclosed that the IMU has provided suicide bombers to Tehreek-e-Taliban Pakistan (TTP)-linked terrorists in Balochistan and they had planned new attacks on their targets." Another intelligence official, Ahed Khan, stated, "The TTP and the IMU have long been collaborating with each other and conducting joint terrorist operations. . They have carried out several attacks in Balochistan, targeting security forces, [other] Muslims and top government officials."

Balochistan Home and Tribal Affairs Secretary Akbar Hussain Durrani, however claimed, "Our forces are highly able to combat foreign terrorists in the region. All law enforcement agencies have been directed to keep an eye on those areas [containing a number of Tajiks and Uzbeks] to foil any expected terrorist activity. We have also deployed additional troops on the entry points in Balochistan close to ... Waziristan, and our bordering districts are under strict surveillance to ensure the checking of each individual crossing into the province." "As wth Quetta is a hub for Uzbeks and Tajiks, and thousands of these foreigners are living in and around the city," he informed. There are an estimated 70,000 Uzbeks in Pakistan.

Characteristic of past counter-terrorist operations in Pakistan, the present Operation Zarb-e-Azb has displaced large civilian populations, with Pakistan's Army relying overwhelmingly on aerial attacks, and using long range weapons, rather than genuinely engaging on the ground. The operations also left wide open spaces for terrorists to escape the area in the guise of Internally Displaced Persons (IDPs), with a belated 'ground offensive' commencing on June 30, a full fifteen days after the start of the Operation. Reports indicate that, by July 4, the number of people displaced from NWA as a result of Operation Zarb-e-Azb had crossed 570,000, including 240,000 children. Meanwhile, a report titled, 'An Eyewitness Account of Pakistan's War in North Waziristan', published on June 26, 2014, observed, "We tried hard to probe the impact of Pakistani air strikes. In interviews with dozens of North Waziristan residents, including those in villages targeted by sorties, it became apparent that few militants were killed in the aerial bombing strikes, and most victims were civilians."

The IMU is another of Pakistan's favoured terrorist formations, at one time, integral to Islamabad's Afghan strategy, as were an array of other foreign terrorist groups. It has now gone renegade and turned on its one-time masters. While it may be forced to shift location from time to time as a result of the Army's reluctant Counter Terrorism (CT) operations, it has now demonstrated its capacities to strike with devastating impact virtually across the country, and has created a complex web of linkages with other terrorist formations across the AfPak region.