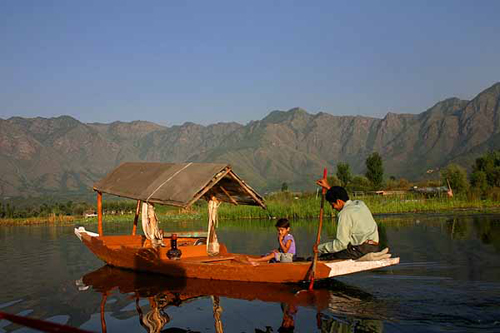 On May 25, 2014, two LeT terrorists, identified as Zubair Ahmad Bhat alias Musab and Ishfaq Ahmad Bhat alias Amir, were killed in a fierce gun battle with SFs at Nowpora Village in the Frisal area of Kulgam District. Deputy Inspector General of Police (DIG) Vijay Kumar disclosed that the two terrorists were killed in the house of the Nowpora village Sarpanch (head of a Panchayat, a village-level local self Government institution), Feroz Ahmad, a People Democratic Party (PDP) leader, soon after they barged into his house to eliminate him.

At least 12 Panchayat members have been killed and another eight have been injured in 20 incidents in the State since Panchayat Elections were held in April-June 2011, after a gap of 33 years. The LeT has claimed at least three attacks on Panchayatmembers, and has released several threat letters to Panchayat members, including the last, on December 19, 2013, carrying the stamp of 'District Commander, Srinagar, Nawab Gaznavi' and another name, 'Yaseen Kashmiri', warning mainstream political workers and Sarpanches of 'dire consequences' if they failed to resign 'within a week'.

Again, on May 10, 2013, two LeT terrorists from Pakistan were killed in a gun battle close to the Line of Control (LoC) at the forward village of Kalsan in the Bigial Dara area of Poonch Sector, about 10 kilometers from Poonch town.

The actual strength of LeT is unknown, but it has 'several thousand' members in the 'Azad Kashmir' region and Punjab Province of Pakistan. A February 2014 report, citing a census by the J&K Police, indicated that 104 terrorists were then active across J&K, of whom 59 were from LeT alone. Of these 59, the top four were identified as Abu Qasim, a Pakistani terrorist; Sajad Ahmad Bhat, hailing from Srinagar; Mohammad Muzzaffar Naikoo of Sopore; and Bilal Ahmed Bhat of Pulwama: all falling into the 'A plus plus' category (the most wanted hardcore terrorists). Pakistan-based Zaki-ur-Rehman Lakhvi alias Chachaji alias Abdullah Azam, a founding member of LeT, currently serves as the 'supreme commander' of operations in Kashmir. Sajid Majidalias Majid Sajid alias Sajid Mir alias Wasi alias Ibrahim alias Mohammad Arshad Khan, based in Pakistan, is the 'commander' in charge of the India set-up.

Significantly, on April 15, 2014, then-Director General of Police (DGP) Ashok Prasad remarked that three main terrorist groups remained active in the Kashmir Valley: LeT, HM and JeM. The Police Chief stated that most of the terrorists operating in Valley hailed from the Punjab area of Pakistan. International sources have repeatedly confirmed this fact in the past, and a report by Counter Terrorism Centre (CTC) titled, "The Fighters of Lashkar-e-Taiba: Recruitment, Training, Deployment and Death", published in April 2013, had noted,

The vast majority of LeT's fighters are recruited from Pakistan's Punjab province. The highest concentration of LeT fighters have come (in order of frequency) from the Districts of Gujranwala, Faisalabad, Lahore, Sheikhupura, Kasur, Sialkot, Bahawalnagar, Bahawalpur, Khanewal, and Multan.

Ninety four percent of fighters list Indian Kashmir as a fighting front. According to our data, the Districts of Kupwara, Baramulla and Poonch in Indian Kashmir account for almost half of all LeT terrorist deaths since 1989.

LeT's presence in J&K was first recorded in 1993, when 12 Pakistani and Afghan mercenaries infiltrated across the LoC, in tandem with the Islami Inquilabi Mahaz, a terrorist outfit then active in the Poonch District of J&K. The group had been created in 1990 by Pakistan's spy agency, the Inter-Services Intelligence (ISI), under the command of Hafiz Mohammad Saeed, in the Kunar Province of Afghanistan. After being banned in 2002, it renamed itself Jamaat-ud-Dawa (JuD), and thereafter, Tehreek-e-Hurmat-e-Rasool, or the Movement for defending the honor of the Prophet; and, thereafter, Tehreek-e-Tahafuz Qibla Awal, or the Movement for the Safeguarding of the First Center of Prayer. Nevertheless, the original titles of LeT and JuD remain the most commonly used. Saeed has constantly been calling for a "final jihad" for Kashmir.

Most recently, on May 28, 2014, Hafiz Saeed delivered a speech, as thousands of his 'followers' joined him at Aabpara Chowk situated just a few hundred yards from the ISI headquarters in Pakistan's capital city of Islamabad, declaring that the "time has come to perform the final jihad against India to free Kashmir from Indian occupation".

However, the LeT's professed ideology goes beyond merely challenging India's sovereignty over the State of J&K. It does, of course, seek to liberate Kashmir and merge it with Pakistan using violent means. However, the Lashkar's 'agenda' outlined in an undated 1990s pamphlet, titled, "Why are we waging jihad" includes the restoration of Islamic rule over all parts of India. Way back in February 1996, crystallizing the LeT strategy of extending its networks and strikes across all of India, Saeed had publicly articulated, in an address at the Lahore Press Club: "The jihad in Kashmir would soon spread to entire India. Our mujahideen would create three Pakistans in India." Again, during a three-day annual congregation of the members of the Markaz-ad-Da'awa-wal-Irshad at Muridke near Lahore on February 6, 2000, Saeed declared that Kashmir was a 'gateway to capture India' and that it was the aim of the Markaz and its military wing, LeT, to engineer India's disintegration. Saeed added that his organisation's campaign in Hyderabad (Andhra Pradesh) and Junagadh (Gujarat) were among the highest priorities.

Moreover, LeT seeks to bring about a union of all Muslim majority regions in countries that surround Pakistan, towards the end of creating an integrated Muslim Ummah across the world. To these ends, it has been active in J&K, Chechnya and other parts of Central Asia. Further, LeT's reach and presence has steadily been expanding over the past decade, with its units now operational in a vast network that stretches from North America to Australia. An ally of al Qaeda, it has units in Germany, UK, Iraq, Oman, Bahrain, Dubai and Bangladesh, and shares fraternal links with jihadists in the Philippines, Kosovo, Chechnya, Palestine, Jordan and South East Asia. In 2004, LeT reportedly dispatched several operatives to Iraq to fight the Americans and British. Led by an LeT operative named Danish Ahmed, a Pakistani national from the Bahawalpur area of Punjab Province, the team was arrested by British forces in April 2004. More recently, cadres drawn from LeT, Laskhar-e-Jhangvi (LeJ), HuJI, JeM, Jundallah (the Karachi-based, al Qaeda-linked group), and several other Pakistani terror groups are known to have merged with al Qaeda in Syria, under the identity of 'Brigade 313'.

Again, on May 22, 2014, terrorists armed with machine guns and rocket-propelled grenades attacked the Indian Consulate in Afghanistan's Herat Province. Though the attackers failed to inflict any casualties, SFs killed all four attackers. Afghan President Hamid Karzai asserted that specific intelligence, including Western intelligence sources, had confirmed that the LeT was behind the Herat attack. Security sources in the Indian establishment, on June 4, also concluded, on the basis of a study of the pattern of attack and the recoveries from the operatives killed, that an LeT hit squad had been assigned to take hostages and lay siege on the Indian Consulate. LeT's involvement has already been confirmed in the July 7, 2008, suicide attack on the Indian Embassy in Kabul, which killed 66 persons.

With open support from ISI, LeT runs terrorist camps at Muzaffarabad and Gilgit in PoK, and in Lahore, Peshawar, Islamabad, Rawalpindi, Karachi, Multan, Quetta, Gujranwala, Waziristan, and Sialkot in Pakistan. The Pakistani state had channeled a large proportion of international aid received in the wake of the earthquake in 2005 through the JuD, withholding state relief operations in order to facilitate the LeT's further consolidation in the affected areas of Pakistan occupied Kashmir and Khyber Pakhtunkhwa Province of Pakistan. Recently, Pakistan's Punjab province Government allocated over PKR 61 million in its budget for fiscal 2013-14 for JuD's largest centre, the Markaz-e-Taiba at Muridke. Earlier, in 2009-10, the Government had provided more than PKR 82 million for the administration of JuD facilities.

Indeed, as SAIR has noted previously, the group has entrenched roots in Pakistan, where it has flourished under the protection of the ISI and mainstream political parties. The CTC report noted, moreover, on the basis of information gathered about the recruitment base of LeT cadres, the possible overlap between Pakistan Army recruits and LeT terrorists:

It is noteworthy that there is considerable overlap among the Districts that produce LeT terrorists and those that produce Pakistan Army officers, a dynamic that raises a number of questions about potentially overlapping social networks between the Army and LeT.

Despite rising troubles with domestic terrorism, spearheaded by the Tehrik-e-Taliban Pakistan (TTP), and the shifting loyalties of a range of other groups that have received, and some that continue to receive ISI patronage, the LeT remains the ISI's most favoured terrorist formation. Bruce Riedel, a former CIA analyst, observes, "The LeT remains the favoured instrument of the ISI. The Sharif government is even less inclined than the Zardari Government to take on the LeT given its strength in the Punjab in general and Lahore in particular."

Not surprisingly, despite India's continuous demands to punish those responsible for the 26/11 Mumbai attacks - including Zaki-ur-Rehman Lakhvi, Abdul Wajid, Mazhar Iqbal, Hamad Amin Sadiq, Shahid Jameel Riaz, Jamil Ahmed and Anjum, all LeT operatives who have been charged with planning, financing and executing the attacks, and who are jailed in Adiala Prison in Rawalpindi - the Pakistan Government has demonstrated no urgency in pushing investigations and prosecution forward. More than five years after the incident, a court trying the seven accused, in a hearing on June 4, 2014, once again adjourned the proceedings till June 11, after prosecution lawyers failed to appear in court, for the second time in a week. The lawyers missed a hearing on May 28, 2014, as well. On May 21, 2014, the lawyers in the case had asked the court to beef up their security, complaining that JuD activists had been threatening them and the witnesses: "We and the witnesses have been receiving threats from the JuD activists who want us to stop representing and pursuing the case," the prosecution lawyers alleged, and stated further that a JuD activist was present in the courtroom in every hearing and threatened the witnesses outside. Later, the judge, Attiquer Rehman, had asked the Government to provide him and the lawyers in the case "foolproof security", but no adequate measures have yet been initiated.

Conspicuously, despite facing significant reverses in J&K and other parts of India, LeT still retains the networks, wherewithal and state patronage to carry out attacks across India. LeT terrorism on Indian soil has been calibrated downwards, but as long as the outfit's top leadership continues to get support in the highest echelons of power in Pakistan, it will retain its capacities for resurgence.