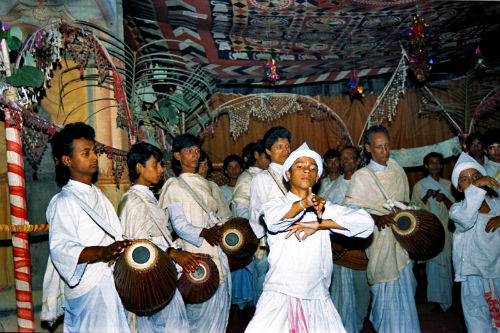 South Asia Intelligence Review/IBNS | | 10 Jun 2014, 01:30 pm
#Assam
In a second incident of a counter-insurgency (CI) operational fatality of a senior Police officer in 2014, Superintendent of Police (SP) Nityananda Goswami of Hamren Police District in central Assam's Karbi Anglong Hill District and his Personal Security Officer (PSO), Ratul Nunisa, were killed in an ambush by suspected Karbi Peoples Liberation Tigers (KPLT) at Rongfu, the outfit's stronghold along the Assam-Meghalaya border, in the night of June 5, 2014.
Their bodies were recovered in the morning of June 6. The SP and 18 others, including additional SP, Bedanta Borkakaty, and Hamren Police station officer-in-charge, Kamal Bora, had gone to the area on a counter-insurgency operation when they came under heavy fire from a large number of militants. The Police team was reportedly ambushed by a group of 15-20 militants.
Even as the newly formed militant outfit, United Peoples Liberation Army (UPLA), comprising of former United People's Democratic Solidarity (UPDS) cadres, claimed responsibility for the killings, top intelligence sources have refuted the claim, arguing that "preliminary investigation into the incident has indicated KPLT's involvement and that there were specific inputs about their movement". According to the police, the SP had launched the operation based on wrong information given by informers who were surrendered KPLT cadres, resulting in the debacle. However, there are reports which suggest that both UPLA and KPLT may have been involved in the incident.

Earlier this year, on January 28, Additional SP-Security, Gulzar Hussain of Sonitpur district and a 'police Informer' B. Enla, were killed, while five Constables were injured, when a unit of the anti-talk I.K Sonbijit faction of the National Democratic Front of Bodoland (NDFB-IKS), currently the most lethal outfit in Assam, ambushed a patrol party at Thalola in the Batachipur area under Dhekiajuli Police Station in Sonitpur District.

According to reports, the Centre is all set to declare KPLT a banned organization following the spurt in violence perpetrated by the outfit. A decision in this effect is expected any day, according to a June 6, 2014, statement by a senior Home Ministry official. In 2011, the Government had described KPLT as a group of criminals not representative of the Karbi people, and had ruled out the possibility of talks with them. The Ministry of Home Affairs (MHA) has, however, recognized the UPDS and Karbi Longri North Cachar Hills Liberation Front (KLNLF) - the parent outfits of KPLT - as representative of the Karbi people.

Despite the June 5 setback, the Security Forces (SFs) have recorded a number of successes against the KPLT, prominently including:

May 25, 2014: The 'area commander' of the Dihing area, Mirjang aka Biren Hansey of KPLT was killed by SFs in Sangram village in Karbi Anglong.

On April 20, 2012, in a major setback to the outfit, the 'general secretary' of KPLT, Nilip Enghi and four other cadres were killed, and one was seriously injured, during an encounter with the SFs on the hill track near Harlong Woti in Borpung under the Chowkihola Police Station in East Karbi Anglong District.

KPLT was formed in January 2011 with the objective of carving out Autonomous Karbi State (AKS) out of Assam. On January 9, 2014, KPLT observed its raising day at two separate locations - the 'central headquarters' in East Karbi Anglong and the 'general headquarters' in West Karbi Anglong. Ranam Lijang, 'general secretary in-charge' of the outfit, declared that an autonomous State comprising Karbi Anglong and Dima Hasao is the 'constitutional right of the people' of the Hill Districts.
In order to attain the right and aspiration of the people, a peaceful mass democratic movement had been witnessed over the preceding two decades, he argued, but both the State and Central Governments had paid no heed. Frustrated by the lack of an appropriate response from the Government, Karbi Anglong youth had been 'compelled' to take up arms to demand implementation of Article-244 (A), and to create an autonomous State comprising the two Hill Districts. The KPLT leader further declared that, if the Government failed to solve the vexed issue, the group would be forced to intensify its armed movement to achieve its goal.

Subsequently, in April 2014, the outfit called for an indefinite bandh (general shut down) ahead of the Lok Sabha polls in support of Hemprep Kanthin (self-rule homeland) with the KPLT's general secretary stating, "The indefinite bandh will be withdrawn when candidates promise to place the separate state issue in Parliament if elected".
The bandh was, however, called off to "allow people to cast their votes as they wanted a representative from the constituency to raise their demand for a separate autonomous state in Parliament". Earlier, on January 23, KPLT has called for a 96-hour Karbi Anglong bandh starting January 24, to boycott the Republic Day celebrations in the District. In a statement, the general secretary termed the "Indian Republic a worthless body and... should be viewed as black day. People should abstain from observing Indian Republic day".

There have also been tensions between the Rengma Nagas and the Karbis in the State. On December 27, 2013, at least four persons, the village headman and three women, all belonging to the Rengma Naga community, were shot dead by KPLT militants in Khowanigaon, under the Borpathar Police Station in the Karbi Anglong District. Sources indicated that KPLT militants had issued an ultimatum to Rengma Nagas to leave the District by December 25.
On the same day [December 27], a Naga militant outfit, Rengma Naga Hills Protection Force (RNHPF), had retaliated and launched a counter-attack on the KPLT militants, killing two of them. Further, on December 29, 2013, SFs recovered the bullet-riddled, decomposed bodies of two aged women, suspected to have been killed by KPLT cadres, at Rengma Mouza, Bokajan, in Karbi Anglong District.
On January 3, 2014, highly decomposed bodies of nine persons, blindfolded, their hands tied and shot from close range, were recovered from a gorge in the Pachaspura area, Chumekedima, in Dimapur District in Nagaland. OnJanuary 6, Nagaland Police disclosed that all the nine dead bodies were ethnic Karbis from the Karbi Anglong District of Assam, and included a missing Karbi Students Association (KSA) leader, Harlongbi Engti. The incident was purportedly in retaliation against the killing of the Rengma Nagas in December 2013.

On March 12, 2014, the KPLT warned that Nagaland would be held responsible in case of any 'retaliatory action' from Karbi Anglong, to check the 'intrusion' of Naga people inside Assam. KPLT's statement came after an alleged incursion bid by a section of people from Nagaland into forest areas in Karbi Anglong, and the torching of two houses in a bordering village. Condemning the "encroachment of Karbi Anglong land by people of Nagaland", the KPLT 'general secretary' Ranam Lijang accused the people and Government of Nagaland of "illegal land grabbing" and termed the recent bid as "motivated by evil intention".

KPLT activities have also been reported in the neighboring Meghalaya State. According to a May 20, 2014, report, KPLT was extorting money from the Khasi population residing in Block II, Ri-Bhoi District. KPLT has been openly threatening Khasi people who refuse to heed their extortion threats. A resident of Umtleih village in Umsning, Ri-Bhoi District, stated that he had received a call from the 'area commander' of the outfit in the night of May 19, demanding that each family of the village should pay INR 2,000 to the outfit. The 'area commander' also threatened that the outfit would not hesitate to kill those who refused to pay.

KPLT, which came under SF pressure immediately after its formation in January 2011, has succeeded in replenishing its strength in 2013, killing seven civilians and one SF during the year. The latest attack suggests renewed vigor in the outfit, but, with the death of a senior Police officer, is also likely to provoke dramatically escalating state responses.

(The view expressed in the article is of the author and not India Blooms News Service)
Image: Wikimedia Commons
Related Images