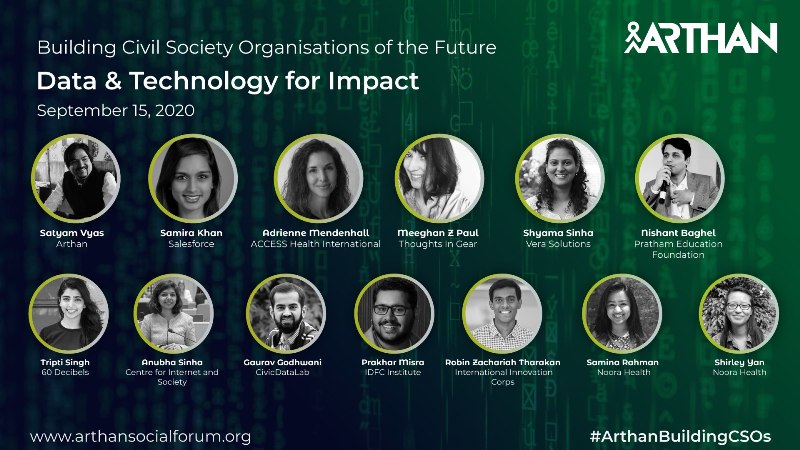 Arthan: Using the right data as a tool for decision making is imperative in this pandemic situation

New Delhi/IBNS: Now, in this pandemic afflicted world, it is imperative to efficiently collect and use data to drive decision making, said Satyam Vyas, Founder of Arthan, a New Delhi based social enterprise.

He was talking at a virtual conference recently organised by Arthan on 'Data and Technology for Impact' as part of their initiative called ‘Building Civil Society Organisations of the Future’ an online-to-offline initiative, which is scheduled to run till December 2021.

“There is a need to use technology as a tool to enable the continued, yet safe, interactions with at-risk communities, as well as to build platforms to analyse and share data rapidly amongst teams and stakeholders,” said Vyas.

He said that the pandemic has also made it imperative to restructure the way everyone works and build tools and processes that enable in the efficient utilization of data.

Some of the organizations who participated included Thoughts in Gear, International Innovation Corps, Salesforce, 60 Decibels, Vera Solutions, IDFC institute, CivicDataLab, Center for Internet and Society, among others.

The panel on Data and Technology ‘Tools in Crisis’, discussed how simple technologies like SMS, WhatsApp, calls, etc. have allowed for correct communication and accurate information to reach the larger population, and has created a ground for digital inclusion.

Pratham, one of India’s largest NGOs, said at the Conference that Covid-19 forced them to innovate extensively to reach children where they are.

The organization realized how not every family has a smartphone or internet access, and that they need to design content on SMS so that families with even the most basic phones can educate their children.

A workshop introduced a step-by-step flow chart of collecting and analysing data where both short- and long-term outcomes can be explored.

This was followed by a masterclass on the use of Predictive Impact Analysis and practical tips on how to apply the same.

Open Data in India panel focused on the role of data in accelerating development goals.

According to the panellists, open data can support the economy in three ways: civic participation, better GDP growth, and enabling digitization of the economy.

Arthan said in a release that its  previous eight tracks on the Future of Fundraising, Future of Jobs, Future of Education, Women’s Leadership in the Development Sector, Tomorrow’s Liveable Cities, Building Inclusive Organisations, Investing for Good and Strategy saw over 300 speakers, over 3000 participants and received 500,000+ views.