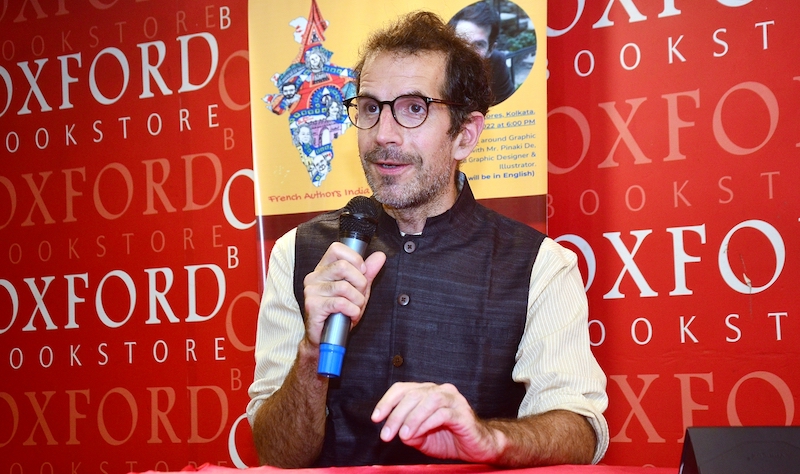 French love to criticise a lot but care that people take it in right spirit, says author-cartoonist Julien Berjeaut in Kolkata

Kolkata: The French love to criticise a lot and can be really mean at times but they care that people take it in the right spirit, said French cartoonist and comic book artist Julien Berjeaut during his visit to the city.

"They criticize themselves, people around them, the world and are really mean at times. But their criticism comes with a great deal of pleasure and care that people do not perceive it in an unfavourable way," said Julien Berjeaut or Juls who met an excited audience at Oxford Bookstore, Kolkata last Friday in association with The Embassy of France /The French Institute in India and the Alliance Française du Bengale.

In a conversation with noted graphic designer Pinaki De,  Julien spoke about his journey from a Chinese History teacher and researcher to a cartoonist.

Julien said he had to also be quite sharp while commenting on various works as they dealt with pertinent social issues and according to him the more criticism such kind of work received the better it could be.

Julien talked about the French spirit and according to him the French love to criticise a lot.

During the conversation Berjeaut dated back to 1996, when he first came to Kolkata and was pursuing a job as a researcher in ancient Chinese history.  However his inclination for drawing motivated him for a career change.

He elaborated on his passion regarding drawing and that is what he started off first as cartoonist and later on went to pursue projects with prestigious French magazines.

“I have been drawing forever, like any kids, but they forget drawing when they start to read and write, but I kept on drawing even when I was in school or a prestigious college,” he said.

When the above thought occurred to Julien, he decided to earn a living out of it.  He wanted to pursue the fantastic opportunity of having a life of freedom even though it seemed kind of unreasonable at that time.

In Julien’s initial years as a cartoonist, he used to combine various social and political issues in his works. His aim was to spread awareness through it.

On the scene of cartoons in India, he said: "In India what I notice is that this particular form of literature is mainly available for children. However, I believe people in India is becoming more and more interested to discover this vast territory of comic literature not only through editorial cartoon published in newspaper, but also as a form creation." "This industry has an enormous potential to grow in near future in India," he said.


Interviewer Pinaki De then informed the audience about French short animation films which are based on Julien’s book “ Fifty Shades Of Greek” and they can be seen at the French “ARTE” Tv.  De said that Julien is collaborating with a lot of philosophers and putting them into various interesting contemporary situations.

He said that Julien is combining serious questions on philosophy with a light-hearted touch and is aiming to integrate it with real life situations. His efforts in doing so has earned him a “great viewership in France”.

De then spoke about Julien’s collaborations with philosopher George Pappas and questioned him “what made him interested in philosophy in that kind of way” while reminding that for Indian people philosophy has always been a bit distant thing and the general people do not engage with the subject much. 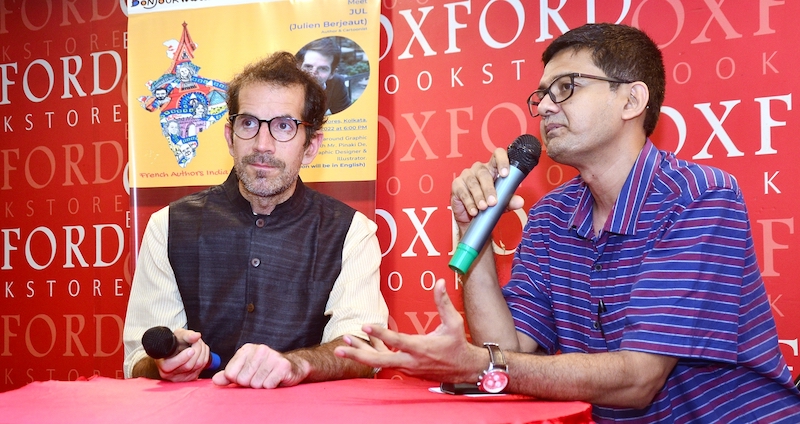 Julien seconded De and said that this distance is not prevalent only in India but in other places also.

“People know the names of the philosophers but they don't actually read thoroughly about them,” said Julien.

Julien said most of the people’s knowledge about philosophers are only limited to what they studied in high school and then jokingly added that people do not read about them in their free time, like when they are on the beach, and instead they switch Netflix on.

He said  it was indeed a challenge to depict those philosophers as heroes and as a joke they pretend to make it a book on 5000 years of human thought.

As the floor opened for questions, one member from the audience asked Julien if he took any inspiration from The Bengal School of Art as he had spent a considerable amount of time in Shantiniketan, the abode of learning founded by Rabindranath Tagore.

Julien said it was not an influence as such but he felt immense pleasure in learning about his different creations.

He revealed that he had spent a lot of time in Kolkata's Tangra and was influenced a lot by that place and its heritage.