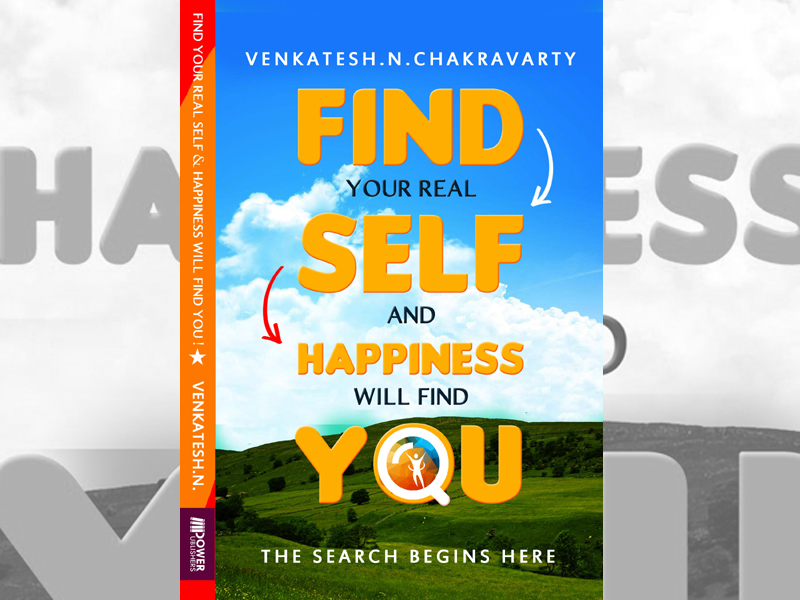 Author interview: Venkatesh N Chakravarty talks about his book Find Your Real Self and Happiness Will Find You

Instead of pursuing happiness, look inwards and see what needs to be changed within oneself, and happiness will follow, says author Venkatesh N Chakravarty

Congratulations on the release of Find Your Real Self and Happiness Will Find You.  Tell us something about this book. How is it different or unique from other, earlier books of this type.

This book is all about the quest for success and happiness.  Everyone wishes to be successful in something or the other and also wishes to lead a happy life.

When we look at success, there is generally an objective, a goal of some kind to be achieved within some timeline. There is no debate here. The key question which arises is -- who are the major beneficiaries? Is it an individual or a wider group of people, an organisation and/or a country?

The other question is whether success and happiness are always to be inextricably linked to the quantum of wealth, height of fame and glory.

Can success be achieved in some other way and not necessarily with reference to some benchmark of wealth or fame? If yes, can this success promote happiness and a sense of peace? Can happiness be long lasting? Who is responsible for our happiness? Is it external or internal? If it is internal, why do we look externally to find happiness? Why do we feel stressed or overwhelmed by circumstances or situations? Can we examine our beliefs, challenge and change our beliefs if they are limiting beliefs? Can we do some introspection first to understand ourselves?

I have made a humble attempt to introduce some seeds of introspection through various ancient and contemporary stories. In addition, there are some thought-provoking views with regard to leadership, humility, selflessness and a tendency to be attracted more to the packaging rather focusing on the contents.

If a beginning is made with introspection, then some of the seeds of transformational thoughts, with gentle nurturing, will grow into many plants. The transformational effect on an individual can be significant and illuminating. Sometimes you need only one lamp to light a thousand lamps.

What kind of books inspire you as a writer? Who are your favorite authors?

I am inspired by a wide spectrum of books ranging from management to philosophical and the spiritual aspects. The list of my favourite authors is fairly long and includes both writers of fiction and non-fiction books. Some of the names though not exhaustive are Malcolm Gladwell, Ken Blanchard, Spencer Johnson, Adam Grant, Ryan Holiday, Dale Carnegie, James Clear, Carol S Dweck, Henry Denker, Irving Wallace and Arthur Hailey.

On the metaphysical and spiritual side, I am highly inspired by Swami Vivekananda, Sri Ramakrishna Paramahamsa, the Upanishads like Mandukya Upanishad, Kathopanishad and the Bhagavad Gita.

What inspires you to write? Who inspired you to become a writer? How do you manage to find time from your work? At what time do you write?

I had a natural inclination to write poems in my initial years of working life. I had also contributed a couple of articles to an in-house magazine of my former organisations. I realised that even if I wrote infrequently, I experienced a sense of bliss whenever I got down to writing. Somehow in the hectic years of being completely focused on work and learning formally and informally, I did not pick up the pen to do some serious writing. Things changed in the year 2013 when I decided to move away from the corporate world and begin a new chapter in life. I started to write my first book and also engage myself in contributing to society. Fortunately I got an opportunity to volunteer for an NGO which was focused on education of underprivileged children.

Tell us something about yourself and your background.

I have been a career insurer and reinsurer for more than 30 years. My last stint was as the CEO of General Reinsurance AG India branch from where I retired in August 2019. I have been an independent non-executive director on the board of a listed IT Company for the last nine years.

In the social sector, it has been an honour to have served as a volunteer for a couple of NGOs for about seven years. This has included giving motivational talks, counselling and mentoring. Having seen and understood the huge challenges of economically and socially underprivileged and differently abled students at the ground level, I am trying my best along with many dedicated people in the NGO, to encourage and support such students so that they have a helping hand which can enable them to transform their lives.

Tell us about your earlier book or books and what they are about.

My previous book was ‘When Things Go Wrong, Do Something Right’. This was a book which focused on motivation, overcoming challenges in life, the benefits of selfless giving, changing oneself to achieve success, reducing stress and believing in oneself. There is also an underlying message about not living in the past but learning from it and implementing a course correction in the present. If this is done, then there need not be any huge concern or stress regarding the future.

Please share a personal experience you have mentioned in this book that has relevance to the topic of the book.

In the corporate world and even when working as a volunteer for an NGO, I was struck by the number of young employees and students who did not realise that their own beliefs were holding them back from realising their potential.

Let me tell you a story which reveals the chains or the limiting beliefs which bind people and hold them back from achieving everything they are capable of achieving in life.

Some years back I was asked by the Project Head of the NGO to counsel a young boy who was attending a training program, on successful completion of which would result in placement in the retail sector.

During my first interaction, I noticed he was shy and reticent and had a tendency to answer in monosyllables. As I continued to interact with him, he slowly started to open up. He hesitantly mentioned that he had no confidence in himself and would never succeed in life due to his short height.

To say, I was taken aback is putting things mildly. On gently probing further, he disclosed that his friends made fun of his height, undermined him in several ways and repeatedly joked he would never get any job due to his lack of height.

The other shocking thing was that even his parents reinforced the belief that his short height would be a huge barrier and no one would employ him.

I will not go through the details here except to say that I spent time in making him understand that reality could be very different from opinions and views even if they are expressed by family members or friends. It took considerable time for him to be convinced that his success was dependent on many factors but lack of height was certainly not one of them.

As long as he worked hard towards acquiring the skills and knowledge required for a particular job and developed the right attitude, he would surely succeed.

Once this boy realised his potential, he made rapid progress and completed the program successfully. The good news was that he soon got hired as a cashier with a major retail store.

GIve our readers your tips for finding happiness.

The key message is that happiness exists within every individual. It is not something which exists externally. There is no need to search and find happiness.

Every constructive, noble and positive thought with corresponding action, will lead to an outcome which makes happiness rise to the surface as a submarine emerging from the depth of an ocean. The challenge is to find time to look inwards and see what needs to change within oneself.

In this book, there are several stories and examples of people whose life and some events associated with their lives are thought provoking and provide the seeds for introspection.

Once this realisation surfaces, then the process of transformation can begin quickly. A seeker who is convinced he is on the right path will keep evolving and eventually realise the truth regarding happiness.