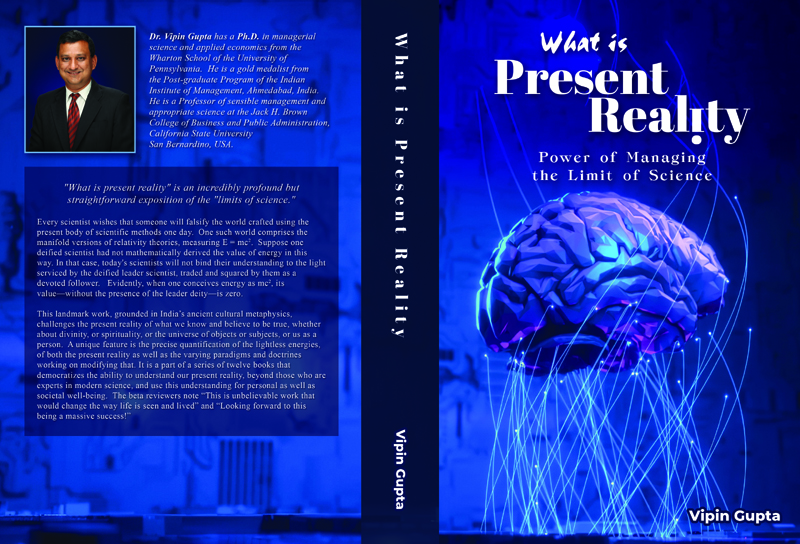 'What is Present Realty' is the second book of the series, “Vastly Integrated Processes Inside Nature” by Vipin Gupta

Congratulations on the release of What is Present Reality’. Is this your second book on this scientific discipline?

Yes, ‘What is Present Reality’ is the second book in the series, “Vastly Integrated Processes Inside Nature.”  It takes the subject of the first book ‘What is Divine Energy’, which was released in January 2021, forward.

Tell us a little about the ‘limitless science’ that you have talked about in this book.

What is not present within the limit of science is the scientist.

Therefore, the scientist becomes upset that his value is not being considered when one applies the primary paradigm of objective science.   He compensates for the limitations of objective science by servicing his subjectivity in the form of the ideas, the ideas that are false and therefore falsifiable.

Science no longer remains focused on natural, physical objects and subjects.  Instead, science enters the domain that is technically beyond the limits of science.   In other words, science becomes limitless.   When one takes no subject as taboo for studying scientifically, i.e., for quantifying its objective effect value and inferring its causative entity reality, one becomes an investigator of the limitless science.

In this book, no subject is a taboo, regardless of its academic discipline or cultural roots, as long as it helps us understand the truth of the present reality.

How do you think this book will contribute to making better leaders out of professionals?

Leadership is about envisioning a desired vision and becoming devoted to a desirable mission for effortlessly, cost-effectively realizing that vision, by charting a path of least resistance, conflict, discordance, and opposition.  We should stand up for and educate all those who are seeking to unsustainably follow a leader, who is manipulatively reproducing supernatural behaviours that are cost-escalating.  That is the mantra for making each professional a better leader.   By understanding the metaphysical foundations of human behaviour highlighted in this book, one becomes a better leader.

Is this book aimed for a certain niche audience?

This book is aimed at those who wish to understand the limitations of science and be the leaders in designing a science that transcends those limits.   It is intended for those who are fascinated by the mystery of the present reality.

Do you dissect any pre-existing theories in the book? Which one?

There are many theories that the book deconstructs.   As an example, Darwin’s theory of the origin of life.   The book shows that the Methyl is the origin of life.   Life is sequenced through the reproduction of natural behaviors.   There are six primordial forms of life, including the phage, the archeon, the bacterium, the eukaryote, the prokaryote, and the spirit manifesting the cell.  There are thirty different groups of entities that get formed through the diverse proportionate proportions of these six primordial forms.

The thirty-six groups of entities correspond to the thirty-six star seed deity groups identified in ancient international scriptures.   They correspond to the ascending and the descending convergent-effects of the eighteen heavens (Edens) or eighteen hells, depending on the perspective.   The convergent points of these eighteen Edens are the eighteen lokas, the primordial realms, identified in ancient Indian scriptures.   Those eighteen primordial realms are formed through the interaction of the six forms of life with the three primordial-primordial realms, which constitute the past, the present, and the future of the Vega white star and the entire universe, which forms with the sentient energy of the Vega white star.

What are your favorite books in the same genre as your present book?

The present book constitutes a new genre, a genre of metaphysical science, based on 100 per cent original discoveries.  I have read many ideas and theories, as the work is based on extensive reading.   However, what I report in the present book are the discoveries and their explanations, which go beyond what I have read.   I substantiate all discoveries with the quantified energy values and show the mathematical computation of those values for the critical discoveries.  I provide key terms in both English and Hindi language, to help with further research on the subject.

Have you received any feedback so far? How has the book been received?

I completed the book just now. It is now being reviewed by book critics and review experts.

Do you have a message for your readers?

I am confident that the book will help each reader gain a clear consciousness of the present reality and the science.   It is an enjoyable read and is an eye-opener.