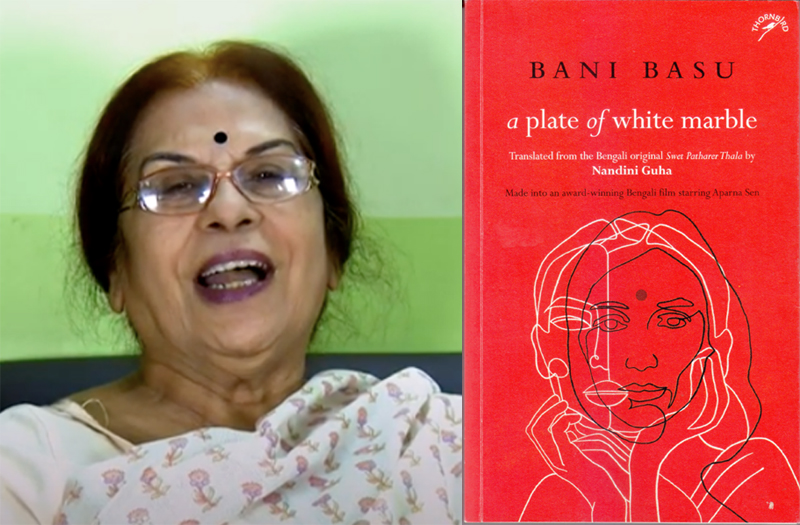 Most men are completely insensitive to the sufferings of women: Bani Basu

The recently published A Plate of White Marble, translated from Sahitya Akademi winning  Bengali writer Bani Basu’s book (Swet Patherer Thala) throws up the age-old question of woman’s place in society, and whether  financial power changes the equation. Ranjita Biswas in conversation with the author

This is the first translation of Swet Patherer Thala, though a film has been made on the novel quite long ago. Why do you think it has taken almost three decades to come out in English though it is a well-known book in Bengali?

I can ask you in return why it would seem natural that a well- known book in Bangla should necessarily be translated into English very soon?  It is fortunate that it is translated at all. The book market may have changed since then, and the twenty odd languages of this country thriving within their narrow local boundaries may have been curious  about one another  which has resulted in a new interest in translations. The publishers have just responded to this new demand.

The novel is set in the early 50s where Bandana, the protagonist, a young widow, is portrayed as the voice of the ‘new woman’ emerging in the middle class milieu

Bandana is not the outcome of any movement as such. Freedom from superstitions, liberal attitude of a few elders towards women- these happened just as a matter of course. Another reason must have been the shock of Partition. In Bengal especially, the women of the displaced families took the reins in their own hands while most men,  middle-aged by then, found it difficult to find a footing in the new country. With shouldering the financial responsibility the women automatically earned some power and moved into a higher status. Social constraints could no longer be as binding on them as before. Financial self-sufficiency is the highest power to change women’s lives. With that came the right of decision making.

But the entire process was very slow. It has been extremely delicate for women to shake off the shackles of widowhood, as Bandana was, because their very loyalty and love for their husband were held in question. It always needed some agency.

But during the Independence movement many women from different classes came out to join too. Do you think once Independence was achieved, women got suppressed or expected to play the ‘back to the kitchen’ role? It has happened in other countries as well, even in post-War Western countries when women holding the fort during the war years were now expected to be ‘good housewives’ and stay at home.

I have already pointed out that the transition or freedom, whatever you call it, has never been fast or easy. It has been a constant tug of war between the old and the new values. Society’s expectations from women are still the same at the core. Even when they are highly educated and financially independent, and contributing to the family fund, they would be judged by their skill in doing the household chores, their willingness to embrace the old values including widowhood practices. If they fail there but excel in other fields, like raising the children , providing security  for the entire family etc., she would be grudgingly accepted.

How much research did you have to do to bring out the nuances of the era?

Hardly  any. It was all stark reality happening every day, everywhere. Exceptions were few. I, as a sensitive girl, had to pass through paralyzing trauma of pain and anger  every time the incident of somebody’s widowhood occurred.

Today in the mid- 21st century, when Indian women are participating in all fields, even combat warfare, how much difference in societal attitude towards  women do you observe  from the era you have portrayed in the book?

Not much. There has been a grudging surrender. Most men are completely insensitive to the sufferings of women. They just don’t understand. However, Indian society is neither static nor the same everywhere. There are different levels of progress. Several centuries are living side by side here.

Fiction is often based on real-life experiences. Did you come across anyone like the protagonist/ or the people that suppressed women in their families, though educated and supposedly sophisticated with familiarity to modern ideas?

Of course I have seen Bandana-like situations. But the real women were less fortunate than Bandana. They had no such supportive uncle, nor a friend as the office boss. Though the lover often materialized,  at times it complicated the situation.

One question today’s reader might ask, why did Bandana reject the offer of marriage by an understanding, liberal friend, whom she liked immensely? Was she afraid to go the whole hog by breaking the set tradition of widowhood?

The answer is there in the novel for everybody to see. She was held back by her son. This is another piece of reality which we must not ignore. Widow remarriage  has been made legal, but society is still in doubts about its morality, especially when there are children. If they are small there is one kind of trouble, if they are grown up the trouble is of a different hue. But trouble is there, all right.

(A Plate of White Marble translated by Nandini Guha. Published by Niyogi Books)