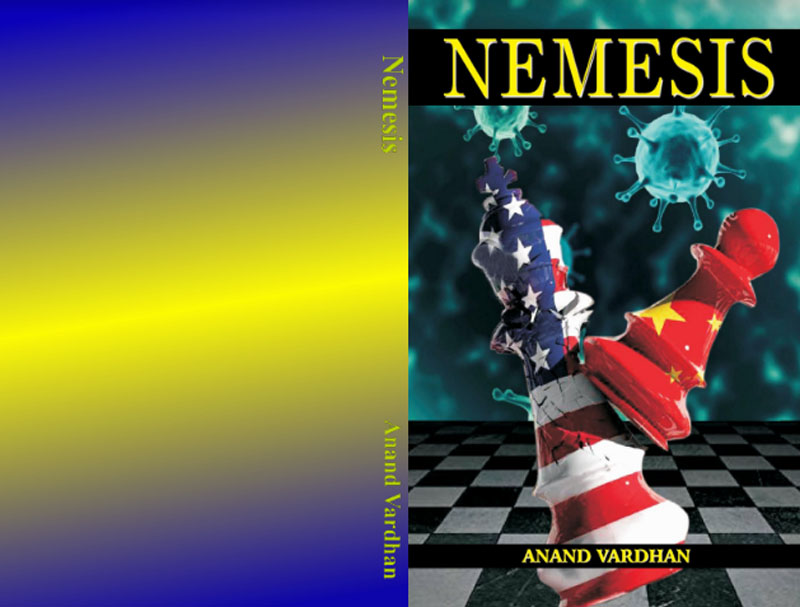 In his typical conversational tone, author Anand Vardhan explains what led him to write his latest fiction, Nemesis.

Tell us a little about your new book Nemesis. What the book is about.

"Nemesis" is my new book which has been launched worldwide.

This a rather serious subject but the treatment of the book as a thriller / fiction engages every American interested as he may be in his countrymen, brethren and fellow members of his civil society.

This book is essentially intended to remind every American that he is responsible to this nation, his people and that no one can ever belittle this great American nation and its people.

It is intended to drive home the point to the American people that it is time to stand up for our nation, a point that seems to be losing relevance in the current day scenario. Then, it is time to wake up to reality.

The China owned COVID19 pandemic attack has already killed hundreds and thousands of innocent Americans while America stands as a hapless clueless spectator.

We hear that the book is very relevant in today’s situation post COVID-19, when the world is boycotting China and the possibilities before India. What do you have to say about it?

I totally agree with you. “Nemesis " is the most contemporary book as it provides the real insight into the developing global geopolitical scenario, the Cold War politics and the sudden emergence of China as the ambitious techno-economic global power house having mistakenly indulged in an undeclared chemical warfare to become the world's most powerful nation.

The factum probandum or rather the guilt of the accused was proven by a young American Engineer working in the US factory in China who in turn takes courage to reach to the US President's office to flag off the threat. A true American was worried for months on seeing the Chinese designs while in China.

The geopolitical compulsions for the US to opt for China were thrusted upon America led by US President  Nixon when then Indian Prime Minister Mrs Indira Gandhi attacked East Pakistan, the then ally of the US in spite of the presence of the US 7th fleet in the Bay of Bengal. The Americans were frustrated as Mrs Gandhi had flown overnight to Moscow and signed a long term collaboration treaty between Indian and the then Soviet Union for both at war and peace.

While Mrs Gandhi succeeded in ensuring the world’s largest ever military surrender of the Pakistan army, the US 7th fleet moved away from the Indian waters.

It is this frustration of President Nixon and his political Advisor Henry Kissinger that came out in their private conversation in the White House where Nixon says: She is bitch (referring to Indian Premier Mrs Indira Gandhi). Henry Kissinger: All Indians are bastards

With Pakistan having dwindled, and India and the Soviet Union having emerged as independent powerhouse, Nixon and Kissinger for the first time looked at China.

Planned their first ever official visit and announced to the world that China, the world's largest communist nation is their biggest ally.

What better for the poverty struck and hunger ridden China of the yesteryears. A great blessing for a nation that was totally deprived. This led to a great transformation of China with the total backing of US to what it has indeed become today.

This book is inspirational as it intends to drive home the point that political leaders though desire to deliver the right politico economic solutions, do get into such a soup which is nothing but tantamount to Nemesis. Hence the need for caution to the young American to be awake and alert to the challenges to his homeland.

You have authored 3 books in less than a year. Please tell us about your other two books, Out of the Jaws of Death and Alternative Investment Strategy.

Essentially I am deeply inspired by writing based on real life situations or factual scenarios in life. There is so much happening around us individually or collectively which I think ought to be written about in all seriousness be it on a lighter vein or even admixture with fiction. People are hungry for information and the more real the picture, the brighter the canvas of knowledge.

What inspired you to become a writer, alongside your other work?

My father was a great source of inspiration as he was a journalist and moved on in life to become the senior most bureaucrat in his service till his superannuation. Although he wanted me to go into the corporate world I was more inclined towards the low and the lonely and the have nots of the society. And as such found expression in journalism.

However, as I was not a political animal, I soon moved over to economic journalism, a very new form of expression. And soon took the mantle of economic journalism to the next level over the span of 45 years. Economic writing brought me closer to the reality of life where every economic action will have a positive action and alongside a negative impact.  This brought to life the real stories of happiness, pain, struggle, success and failures. Of thugs and thieves, of smugglers, mafias and the powerful and the elite.

Most of your works are thrillers; how did you develop the skill to write unique thrillers relevant to the present day?

I have written three books in the last few month, thanks to the COVID19 and the lockdown.

The COVID19 pandemic which has strangulated all the economies globally needed some urgent thinking. And here I put all my four decades of experience of economic journalism in the book titled “Alternative Investment Strategy", where I evolved a strategy for the developing world to kick start their economies. Generate investments in Covid19 related products and more so in essential medicines required for humanity and to gradually move on to replacing China as a source for the world economy. The strategy suited economies such an Indian economy which has a very well established public sector , which is perhaps the single largest government financed infrastructure manufacturing from needle and thread to aircraft which needed instruments to act as an umbrella – as growth centres with equity participation with the small and medium enterprises to kick start the economy.

The book "Out of the Jaws of Death" is my first fiction based on a real life story.

You have to live through this real life drama sitting in the privacy of your abode to experience what really goes on in your own world.

Who are your favourite authors?

We read for many different reasons, but first and foremost, to truly experience something—to live inside of a world that is both ours and not. When fiction is based in reality, it can both transcend the idea of what's true and allow for a deeper understanding of the wondrous world we inhabit.

Classics like The Shining (inspired by Stephen King’s solitary stay at an apparently haunted hotel) and Peter Benchley’s Jaws (sparked in part by a 1964 news story of a Great White shark being captured off the coast of Montauk) are just two famous examples of novels based on true stories that became tantalizing narratives. As they say, the truth can be stranger than fiction—and it can certainly inspire fiction, too.

What are your upcoming books after this? Our readers are eager to know of your future books and what is in your mind right now.

Thrillers are my new found love. For, I discovered that the best form of reaching out to the masses is by way of thrillers / fictions while incorporating the real life stories and experiences for others to learn from. I wish to continue this form of writing as this enables me to reach out to a broader readership.

In fact I am happy to inform you that we are planning to even reach out to those of the new generation tech people who are given to an earphone. Hence we are going to convert these books into voice over books.

I have a couple of thrillers up my sleeves. I am only wondering the order in which I would be releasing them. One thing for sure that each of these are unique, linked as they are to real life. It is my assurance that each of these books will be in the category of "one better than the other!”