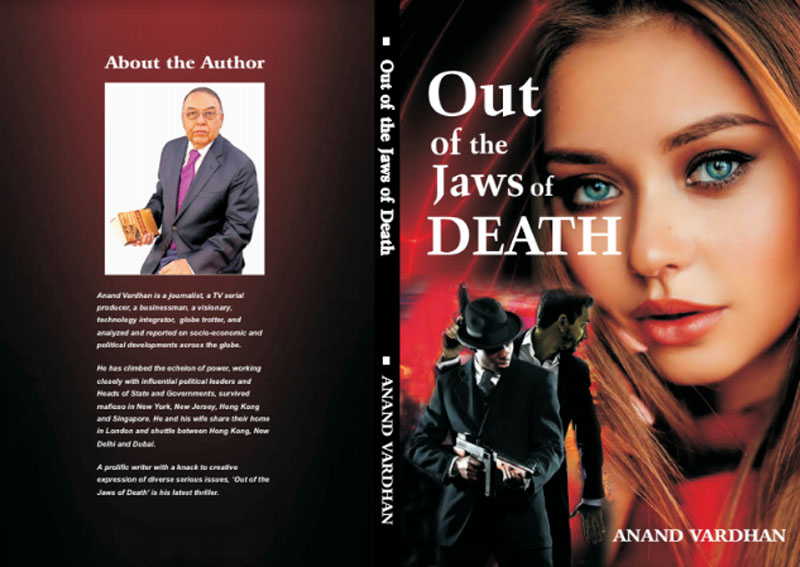 Author interview: Anand Vardhan on his book Out of the Jaws of Death

Congratulations on the release of "Out of the Jaws of Death ". You are not a full-time writer. How and when do you manage time to write in between your regular career?

Thank you indeed. I have been looking forward to the release of this book.

You are quite right. I am not a full time writer. However, in keeping with the proverb “When there is a Will; There is a Way", I have been fortunate to find time to write, be it odd hours of the day or night, much to the agony and discomfort of my family.

What kind of books inspire you as a writer? Who are your favourite authors and poets?

Essentially I am deeply inspired by writing based on real life situations or factual scenarios in life. There is so much happening around us individually or collectively which I think ought to be written about in all seriousness be it in a lighter vein or even admixture with fiction. People are hungry for information and the more real the picture, the brighter the canvas of knowledge.

We read for many different reasons, but first and foremost, to truly experience something—to live inside of a world that is both ours and not. When fiction is based in reality, it can both transcend the idea of what's true and allow for a deeper understanding of the wondrous world we inhabit.

Classics like The Shining (inspired by Stephen King’s solitary stay at an apparently haunted hotel) and Peter Benchley’s Jaws (sparked in part by a 1964 news story of a Great White shark being captured off the coast of Montauk) are just two famous examples of novels based on true stories that became tantalizing narratives. As they say, truth is stranger than fiction—and it can certainly inspire fiction, too.

It's a bug that bites you. There is no money in writing. I am sorry. There was no money in writing at least in the early seventies when I went into journalism. It was for the love of writing and reaching out to the people on issues that I wanted to express myself about.

My father was a great source of inspiration as he was a journalist, and moved on in life to become the senior most bureaucrat in his service till his superannuation. Although he wanted me to go into the corporate world, I was more inclined towards the low and the lonely and the have nots of the society. And as such found expression in journalism.

However, as I was not a political animal, I soon moved over to economic journalism, a very new form of expression. And soon took the mantle of economic journalism to the next level over the span of 45 years. Economic writing brought me closer to the reality of life where every economic action will have a positive action and alongside a negative impact.

This brought to life the real stories of happiness, pain, struggle, success and failures. Of thugs and thieves, of smugglers, mafias and the powerful and the elite.

The COVID19 pandemic aggravated the economic crisis and greater pain and disaster around the world. My pain had no bounds with the global closure of business and industry and the ever rising have-nots in a geometrical progression, I gathered myself to pen down the harsh reality in the form of fiction.

This is how I turned to writing fiction based on true facts revolving around real life happenings. I found greater joy in this style of written expression in the simplest of acts of love, and beauty, hate and animosity to riches and glamour to poverty and hunger which I do hope and expect is the best form of reaching out to my target readers.

What are you doing to let readers know about your book?

I am reaching out to the existing world of fiction readers in the US and Europe on the one hand and Asia and the Pacific on the other. We have drawn up an elaborate electronic reach out program to Fiction reader. We plan to make a pitch to every individual reader as to why they cannot afford to miss out on this real life story. That, it is a rare opportunity for them to experience in the privacy of their abode the reality of life "Out of the Jaws of Death".

Tell us something about your book. Some highlights.

This true to life story of “Out of the Jaws of Death" starts off at the world's oldest Golf Courses in Scotland, usually known as the other of Golf Ground at St Andrews, where two players tee off for a game of golf as a prelude to their business meeting to close the deal of buying out a scotch whisky distillery.

While during the Golf game they agreed to close the deal before leaving back for London later in the day. The Luncheon meeting proved quite the opposite, thanks to the two beautiful daughters of the Distiller in whose eyes, at least one saw pain and grief oozing out as though pleading for relief.

Little did he realise that in his decision to postpone the deal there was not only a sense of relief but also that he was already in love with this younger daughter of the Distiller who suffered from multiple diseases and was left the last asset to sell out to save his life.

The young London based agri commodities global trader due for his sabbatical takes off for Dubai where he is not surprised at meeting this beautiful and charming daughter of the Scot Distiller, turning into a joyful reunion to culminate into the meeting of minds, body and soul in the most glamorous and wealthy hotel resort at Dubai.

After making the best of their union they are invited to the glitter and glitterati by the Sheikh to show off as though the Kingdom's who's who to the finest spread laden with world cuisine and rarest of rare campaigns and alcohols from around the Globe. It is here that he is introduced to another agricultural commodities trade from the Far East, Hong Kong to be precise.
Coming from the same trade they soon take a liking for each other and soon joined by their associates, they strike a multi dollar deal for the supply of chickpea to the desert Kingdom where chip is a major food. But the challenge was to supply the commodity well in time for the festive season a few months later.

The deal was straight. Hong Kong will source the chickpea from Australia/New Zealand, the world's largest producers and supply to the London Company which in turn will supply to the desert Kingdom. Time was of essence.

They all part ways and the Hong Kong friend decides to call on his associate in Bangkok in Thailand en route back home to Hong Kong. Upon hearing this opportunity his friend, owner of massive Hotels, Banks and Insurance companies divided among three brothers, announced that he will source the chickpea.

As a privileged associate, he decides to go on. He signs up after a lot of exercise with brokers and several other unknown players and makes down payments for the quantities.

This is where the mystery shrouds the deal where the biggest of the big deadly Thai and Chinese mafia get into the act to not only take a slice of the multimillion dollar deal but also kidnap the wealthy Thailand trader and stake claim for his release.
It is a race between the mafia and the smart traders with a real time gun battle in between to reach the commodity to the desert kingdom well in time for the festive season.

You have to live through this real life drama sitting in the privacy of your abode to experience of what really goes on in your own world.

Do you plan to take it up as a full-time profession if the response is good?

Writing is in my blood. Now having produced three books between March 2002 to now, I have discovered writing books is a great satisfaction as what you write is also preserved in the shape of a book. Else all these 50 years whatever I wrote as a journalist made me believe that I was just as good as my last news item. That meant having to prove myself every morning.
I did keep my promise with myself that I shall continue to prove myself every morning as long as I live as an economic journalist. This took me places, much bigger than I could have thought of, and surely would have been able to do so as an author.

I will however, now use this mode of expression to talk about all the real life stories that I have gone through alone or along with my friends. I have. 50 years of real life stories to write about whether it was the encounters with mafias, secret agents, rich and the wealthy, politicians, heads of state and governments, the bureaucracy or just the common people, their happiness, sorrow and struggles.

I do believe that people will read my books. For I have something different to tell.