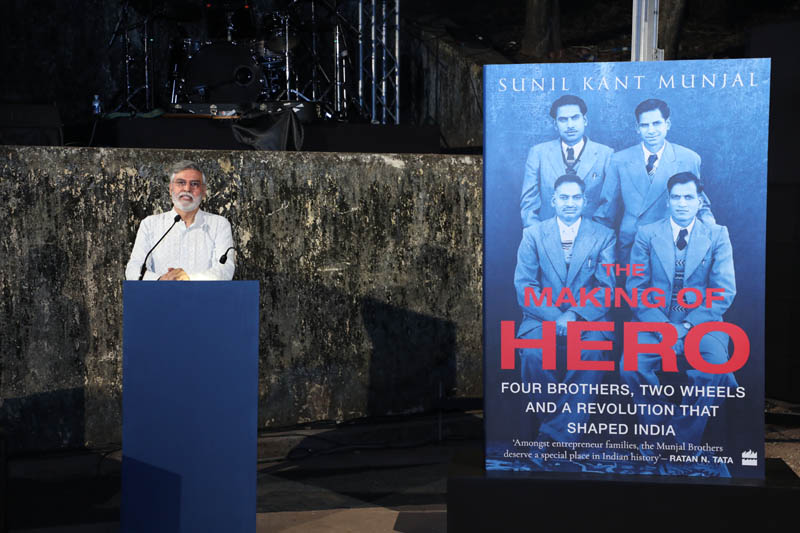 Business Book of the Year 2020 winner

The author, who is the youngest son of Brijmohan Lall Munjal, founder of the Hero Group, captures the incredible journey of the founders in this book.

Published by HarperCollins, The Making of Hero was pitted against a strong field that included Arvind Panagariya and Jaspreet Bindra.

After reaching the short list, The Making of Hero edged out Sudhir Sitapati’s The Brand Factory and B S Ajaikumar’s Excellence has no Borders.

Accepting the award from Dr. Mashelkar, author Munjal said, “The Making of Hero could be considered a management book, a history book or a family business saga. But for me, it is a labour of love. I accept this honour on behalf of the Hero Parivaar — family members, employees, dealers, suppliers and service providers who have partnered and grown to become an extension of Hero. This is their award as much as it is mine.”

According to the author, he wrote this book to celebrate the life and times of his father and uncles in a ravaged India, a struggling India and in an emerging India.

“They are the true Heroes of this story,” said Munjal. “I hope readers see this as a timeless story of aspiration and the power of the human spirit and derive some lesson from it. Stories of grit must be told to as many people in as many ways as possible and I am delighted that a Hindi edition will also be published early next year.’’

Krishan Chopra, Publisher, HarperCollins India said, “The award for The Making of Hero has a special resonance for us as there are few books which highlight as well as it does how homegrown ethos and managerial philosophy, in combination with a judicious culling of wisdom from international business practices, can take Indian business right to the top.”

Sachin Sharma, Senior Commissioning Editor, HarperCollins India said, “Tata Literature Live’s recognition comes at a time when the world is looking at India to be the next manufacturing powerhouse.”

The book is based on how four of the six Munjal brothers built their business, part by part.

Hailing from the bylanes of Kamalia and the rugged landscapes of Quetta (then in India and now in Pakistan) of the 1940s, the six escaped to the Partition-ravaged cities of Amritsar, Agra, and Delhi, and finally settled in Ludhiana with little more than the shirts on their backs.

There was no grand vision of building a world-scale enterprise; their aim was simply to survive and provide for their families.

Hero began with trading in and then manufacturing bicycle parts, evolved into bicycles, mopeds, automotive parts, motorcycles and scooters, and today the restructured group also encompasses service businesses and infrastructure.

The author Sunil Kant Munjal is an entrepreneur and investor with wide-ranging business, governance and policy advisory interests, among other things.

Stalwarts of the Indian industrial sector have appreciated the book and many talked about their personal experiences.

According to Ratan N. Tata, Chairman Emeritus, Tata Sons, “Amongst entrepreneur families, the Munjal Brothers deserve a special place in India’s history. With little or no support from the government or otherwise, Brijmohan, whom I knew well and respected, managed to build successful businesses through diligence, dogged pursuit and an incredible ability to develop relationships and partnerships across the manufacturing value chain. Sunil has spun together a wonderfully detailed and personal story.”

Said Rahul Bajaj, Chairman, Bajaj Auto “I was very fond of Brijmohan Lallji and have often publicly referred to him as my Guru. Brijmohan Lallji had amazing qualities of head and heart and was really a unique individual. Sunil has captured his ability to lead by example and to fill others around him with his spirit and enthusiasm.”

Sunil Bharti Mittal, Founder and Chairman, Bharti Enterprises, said,  “The narrative is set across a vast landscape, and since I have interacted with many in the Munjal family, I was able to relate to a lot of it. The book’s down-to-earth focus and underlying messages on managing businesses, families and relationships are interesting and timeless.”

Said Anand Mahindra, Chairman and Managing Director, Mahindra Group, “Self-belief, to my mind, was the single biggest contribution made to Indian industry by Mr Brijmohan Munjal and his brothers as they built Hero. Sunil has woven together a remarkable story of struggle and triumph based on the bedrock of humility.”

Deepak Parekh, Chairman, HDFC, found it fascinating how the Munjal brothers shared a similar philosophy and culture of high efficiency and productivity while running a business in the most humane manner.

“In The Making of Hero, Sunil offers deep insights into the heart and soul of a manufacturing business, and what others in India could do to become globally competitive and remain relevant over the years,” Parekh said.