Lady Mohini Kent Noon, the author of the book Dear Mama, was busy in conversation with barrister-writer-activist Cherie Blair in the latest session of Kitab organised by Prabha Khaitan Foundation and presented by Shree Cement. In the course of the conversation, Mohini Kent Noon spoke about her book about intimate letters from eminent personalities including Prime Minister Narendra Modi to their mothers as well letters by several other girls who were victims of human trafficking. IBNS correspondent Souvik Ghosh brings excerpts

How did you get the idea of writing this book?

One day the idea of the book came to me. It grew out of my work. I think it is the most direct way to write a letter to the mother because it is a very unique relationship and the honesty of the letters and the love comes from the letters. I think it is very difficult to define this relationship. If you had to write to your brother, some other member of the family, even if it was a husband, it would be different. 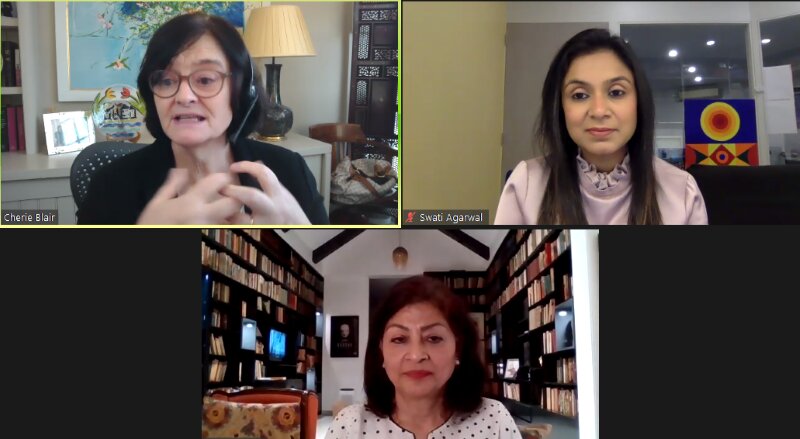 Tell us a bit about the book.

I have written this book ‘Dear Mama’ for LILY against Human Trafficking. The theme of the book is the same as the theme of the charity. To honour women, all women, wives, daughters, girlfriends, colleagues, workers to cherish all women as we cherish our mothers and the format of the book is an open letter to mother from eminent personalities.

How did you start the charity called LILY?

I started the charity about 15 years ago and we named it LILY, after a four year old little girl when she was sold to a pimp for only five thousand rupees. By the way Cherie, it was Margaret’s suggestion (Margaret Mandana, who is a patron of LILY). They were looking for a girl who would symbolize our work. So I thank you Cherie, you are a very brave enterprising and empowered woman for so spontaneously agreeing to do this event and supporting the cause.

Tell us about the letters given by the victims.

I am very pleased to see, look and feel the content of the book and of course there are other letters from the girls, victims. They were not so lucky to have privileged upbringing and their letters are very different. They lived in pain, trauma, went through heartbreaking stories. I can share some two or three stories with you. Because the book is for LILY charity and for the girls and the names have all been changed. This is mandatory. We can’t use names.

How much education plays a role in LILY?

I must tell you that education is a very essential part of LILY. We support free schools. In South India near Bangalore is a community called ‘Lambadia’ for the children of people supposed to be thieves, beggars, looters. There are a lot of girls and boys. Some of them who are older in terms of age and have gone school for some days have started their own business. Another school that we are supporting is in a tribal area of Rajasthan, Vedia tribe, who follow a very peculiar custom putting their daughters into the flesh trade at puberty. The girls had nothing to do or go to until the school came up.