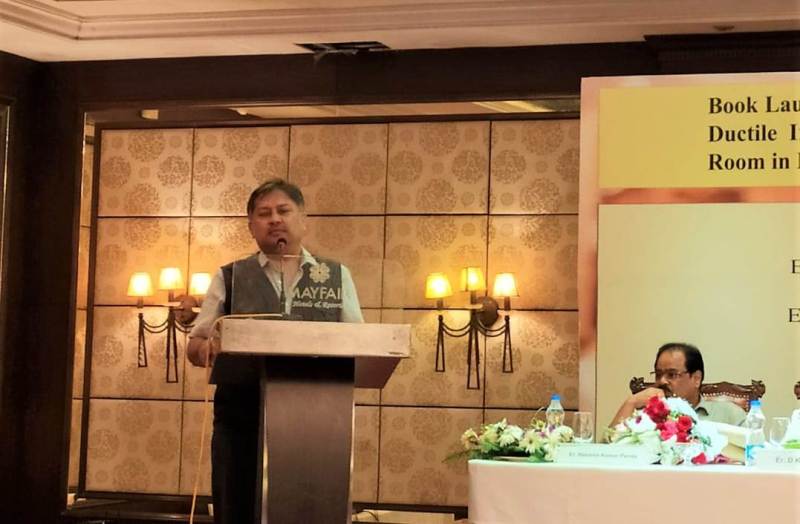 Critically acclaimed and bestselling author of six literary works published between 2010 and 2020, Sabarna Roy, opened up about his new novel 'Etchings of First Quarter of 2020' during an interview. An author of a technical book, which was published in 2019 and has been translated into 8 major European languages, Roy also opened up about the pandemic situation. Excerpts from the interview:

Describe the background of your new book?


'Etchings of the First Quarter of 2020' is a book about a stepfather reaching out to his stepdaughter, who is in her early years of adulthood and on the cusp of venturing into marine conservation. He reaches out to her with ideas that he partly comes across on the opening day of the Kolkata Literary Meet where he has been invited to speak on the Dark Side of the Mind and partly subjects that are dear to him.

The background of the book revealed to me when I was myself invited on the opening day of Kolkata Literary Meet to be a part of the panel discussion on Dark Side of the Mind and I thought in my mind how I will spend the night with my daughter to tell her about what I learnt and shared at the event. We must understand when authors are writing a book, they are not much concerned about how readers would perceive their work. It is only after the book is complete and published that the author is afraid of audience response. I think this book is targeted towards a thinking audience that is concerned with post-modern existential issues.

How have you made the lockdown useful? A piece of advice for the aspiring authors amidst the pandemic.

During the lockdown one of the things that I did was doing a lot of household work, which I never did earlier. This somehow made me feel useful and generally happy. The other things that I did were: reading books; watching world cinema & international TV Series, and listening to music. These I do normally but the intensity increased during the lockdown. I was also working from home.

In the apartment complex where we live, we have many friends. During the weekends we partied a lot maintaining all the safety protocols. This socialization saved us. I participated in a lot of Webinars on various subjects: sometimes as a delegate; sometimes as a speaker. I never lost sight of my Pandemic journal, which I maintained regularly. These things kept me positive.

I believe in the threat of being an opportunity. For authors, pandemic has unleashed before us a plethora of topics and ideas on which we can write and explore new avenues. For employees, it is time for learning new skills. For Employers and Entrepreneurs, it is a time to grab Industrial Revolution 4.0 comprising Artificial/Applied Intelligence, Machine Learning and Robotics; in short: aggressive automation. Pandemic has given us an opportunity to reinvent ourselves.

Are you working on any book during the pandemic?

I am presently writing a book on the human story of the Pandemic. Stories of restlessness, despair, loneliness and remoteness; stories of survivors of COVID-19 and the deaths and the families who have suffered the deaths of near and dear ones; stories of migrant labourers; stories of job-cuts and pay-cuts; stories of COVID warriors, and stories relating to the complexities of working from home.

When are you planning to publish it?

I am planning to publish it after autumn is over in 2021.

Sabarna Roy has authored books like 'Pentacles', 'Frosted Glass', 'Abyss', 'Winter Poems', 'Random Subterranean Mosaic 2012 – 2018' and 'Etchings of the First Quarter of 2020.' He also has a technical publication in his kitty called 'Articles on Ductile Iron Pipelines and Framework Agreement Methodology.'

Here's a summery of his literary works:

Pentacles comprises one long story and four short poems by Sabarna Roy. The work delightfully bridges the gap between the mundane and arcane writings of today and provides an interesting, yet intellectually stimulating, treat for the discerning reader.

New Life is a long story written from the perspective of a successful adult whose mother had deserted the family for another man. The teenage angst and the scars it has left behind on the psyche of the protagonist are subtly reflected in the character. The different elements and characters of the story are beautifully interwoven to produce an intense and compelling story of an adult haunted by the trauma of being deserted by his mother. The work is interspersed with thought-provoking views on issues like love and socio-economic conditions in India.

The traditional rhyme and metre dominated poems are on love, loss and longing. Unshackled by the bonds of rhyme and metre, Sabarna’s free verses evoke the stark reality of urban life, hitting you straight in the guts. The use of everyday urban imagery adds to the appeal of the compositions. The concrete prison of urban life and the unfulfilled desire to escape to a simple life is aptly brought out in The Tower. The other poems of the collection are more biographical in nature with the protagonist being the member of the fairer sex. The free verses sketch out their life story with its attendant pathos, poignancy and logic. The best part of all the compositions is that the reader will definitely identify with the poet and will, in one form or other, have similar stories to narrate.

The stories, set in Calcutta, bring to the fore the darkness lurking in the human psyche and bare the baser instincts. The stories, compactly written and marked by insightful dialogues that raise contemporary issues like man-woman relationships and its strains, morals and ethics, environmental degradation, class inequality, rapid and mass-scale unmindful urbanization, are devoid of sentimentalisation. The result is they remain focused and move around the central character who is named Rahul in all the stories. We encounter the events that shape, mar, guide Rahul’s life and also the lives of those around him, making us question the very essence of existence. Rahul symbolizes modern man; he is not just one character, but all of us rolled into one. The story cycle stands out for two reasons – its brilliant narrative and the dispassionate style with which betrayal in personal relationships and resultant loneliness has been handled.

The poems weave a maze of dreams, images, reflections and stories. They are written in a reflective and many a time in a narrative tenor within a poetic idiom. The poems are inseparable in a hidden way and are magically sequenced like various kinds of flowers in a garland or chapters of differing shades in a novel. Calcutta features in some of the poems like the looming backdrop of Gotham City in a Batman movie.

Abyss is a full length play in two acts with an interval in between. It is essentially a racy crime thriller full of gritty suspense. Act one builds up slowly to result in a crescendo of conflicts between personalities and ideas finally to end with an unnatural death before the interval. Is it a suicide or a murder? Act two evolves through a series of incisive interrogations to unravel the truth, which is deeply disturbing and affecting. As the play unfolds into a very well-crafted situational thriller, underneath is the debate about using land for agriculture or for industry, the ethics of a working author and the nexus of a modern state all wonderfully enmeshed into its storyline and the personal lives of its subtly etched out characters. The highpoints of the play are its central conflict between a mother and her daughter and its female sleuth – Renuka.

The poems contained in this collection, Winter Poems, by Sabarna Roy were inspired by the relatively mild season that prevails in Kolkata following the season of festivities, the Durga and Kali Puja, and portray myriad shades of human life. Some of them deal with the imaginations of death and home while still others the idea of loss and coming to terms with gradual wasting of life. Many aspects of human life and commonplace human impulses are examined and brought to life through a range of imaginations and varied metaphorical associations. The poems are sure to delight the readers and generate a whole range of emotions among them.

Roy's Frosted Glass did very well in the market. His Pentacles and Winter Poems, did so well that Amazon Audible converted them into Audio books by the Australian young jazz singer, Colin Newcomer. Abyss was on the bestseller list at the Oxford Bookstore at the Kolkata Book Fair in 2014.

Random Subterranean Mosaic: 2012–2018 is a kaleidoscope of random, yet mysteriously structured to a pattern, fiction, semi-autobiographical, and autobiographical pieces, covering poems, short-shorts, opinions, observations, and conversations.

Roy says: “All my life I have struggled to achieve an optimal lucidity in language and expression that is required to demystify the hidden self and selves and agendas. I hope I have achieved this in a large measure in this fifth book of mine!"

Etchings of the First Quarter of 2020

Etchings of the First Quarter of 2020 comprises a novella and a poem cycle.

The novella, in the background is a sweetly evolving dialogue between a step-father and a step-daughter, and in the foreground it is a dissection of ideas pivoted around dualism of human life by discussing literary characters like, Lolita, Humbert Humbert, Anna Karenina, and Nikhilesh; thought-leaders like Hegel, Marx, and Heisenberg; political phenomena like, the Bolshevik Revolution; schizophrenia, love as an idea, and the secret love story of T S Eliot; and ecological phenomena like, marine conservation, and all of this is done in a unique way, almost as if we are engaged in a conversation with the author, to make us realize the plurality of life and accepting it to find peace and harmony in life.

The poem cycle is an anthology of 20 sharp edged poems that excite and thrill you as you are encapsulated in the whirlwind of the confrontations between the poet and his alter-ego.