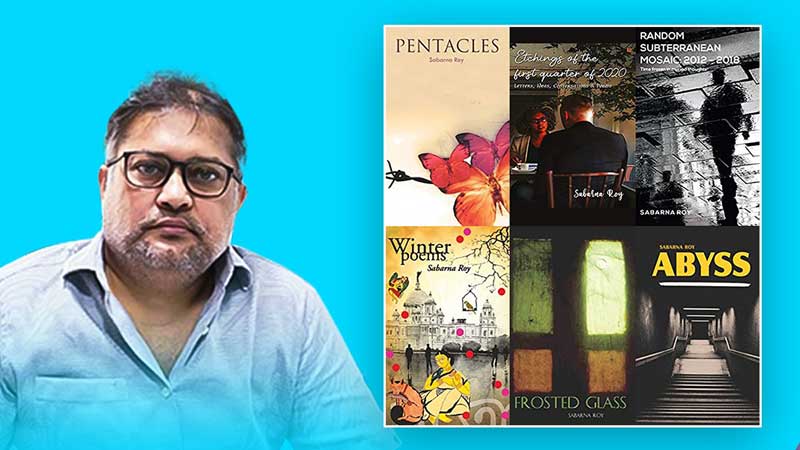 Sabarna Roy is very aptly known as the Calcutta/Kolkata Chronicler. In all the six Literary books that he has written till date, titled: Pentacles; Frosted Glass; Abyss; Winter Poems; Random Subterranean Mosaic: 2012 – 2018, and Etchings of the First Quarter of 2020, they weave magical stories in and around Calcutta/Kolkata and its ever-changing landscape. In his specificity, Sabarna projects the universal and global concerns and issues that every city in the world has undergone in the wake of aggressive post-modern urbanization.

In the ballad, The Tower in Pentacles, Sabarna writes:

“There are times when I stand at the window of my apartment,
Looking at the city where I was born.
Searching for symbols and patterns that I know exist,
Beneath layers of rising vapour in the air of this city.
The smog invariably clouds my vision.
Sometimes I catch a glimpse of familiar bridges and a few monuments.
Mostly I look at the airplanes taking off and landing incessantly,
And the cars that seem to glide on the highway that dives past the distant tower.
The farmlands and wetlands around the tower look plundered and ravaged,
Destroyed by the monstrous man-made construction machinery,
Giving way to spectacular buildings, deluxe hotels and shopping malls.
I tell a lot of people (not caring to hide the strain of pride in my tone):
I live away from the city, amidst greenery and water bodies and clouds.
I know this is a lie; yet I prefer saying it,
It makes my acquisition look like a prize possession.
Soon the ever swelling concrete jungle will engulf everything;
The nooks and corners, the parks and shady grounds by the lakesides,
Where I chased solitary beautiful girls during winter picnics long time ago.”

Sabarna’s crime thriller, Abyss was written with the background that intrinsically depicted the political change in the State of West Bengal in 2011 that brought before us critical debates like, land for agriculture versus land for industry, and the working ethics of an aspiring author.

“My memories raced back to the days of 1971 (Indo-Bangladesh War) in Calcutta when I was a little kid, while reading this book. Every opening or transparent or translucent surface in the house from where any light could come out had to be blacked-out, following government orders, by painting a thick coating of black paint or by pasting three to four layers of newspaper over each opening so that American and Pakistani aircrafts could not find out Indian settlements to bomb at night. Power consumption both privately and publicly was seriously rationed. What we would wait for in those grim days of hopelessness and darkness were the comings and goings of shonpapriwalasin the mornings, ghugniwalasin the evenings, and kulfiwalasduring nighttime. These mobile street vendors were invariably immigrants to the city in search of an earning. The melancholy in their voices attracted us to call them to our doors and houses, and have an optimistic heart-to-heart chat with them, and also sometimes play pranks with them, and relish their foods whatever our parents agreed to buy. The kulfiwalashad an additional attraction to add in their portions for the adults, and that was: shiddhi, a narcotic that would lower down the anxieties in those war-torn days, and bring on a good night’s sleep.”

In the third poem of Winter Poems 2020 in his last book, Etchings of the First Quarter of 2020 (which also contents a novella, titled: Duality), Sabarna writes:

“My city is also teeming with
Hopeless, unemployed, starving and mentally
challenged people
Their faces and destinies crisscrossed with scars

They shiver in the winters till they freeze
They have very little access to shelter – blankets and
quilts, water, and food

I do not know what to do in the winters
Whether to join the children, the lovers, the old, the
rich or the disenfranchised

I go my way – through the suburban shrubs and sit
the whole day along a secret pond with my fishing net,
sunshine warming my shoulders and back, waiting for
my frugal catch – and, in the evening go to Baba’s
house to oil-fry my catch for Baba so that he can devour
them gradually with his single peg of Jack Daniels”

When Sabarna was asked about his feelings about Kolkata, he replied, “Even a day’s separation is so painful to me from my city.”