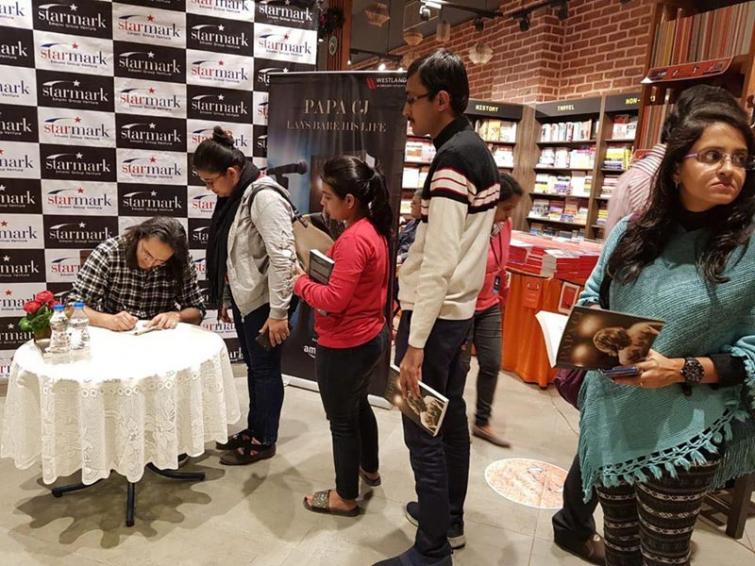 Kolkata/IBNS: When Papa CJ asks his audience to retort with, ‘I come from the land of the Kama Sutra, I can f*** you in more ways than you can count!’ if any one dares to speak against India, you know the man can be comical with a cutting edge.

An award-winning comedian performing at gunpoint in South Africa and living to tell the tale, someone famous for his pranks both childish and reckless, known for his nights of wild partying, a career repeatedly built and torn down, someone ready to take risks you and I wouldn’t dare to take just about sums up this extraordianary performer.

And now Papa CJ fans will be happy to know that this acclaimed comedian has penned his memoir titled 'Naked'.

He was in Kolkata in December last when his publisher Westland Books and the city's lifestyle store Starmark held the launch of the book.

As Papa CJ lays bare his life, from the streets of Calcutta (the older name of Kolkata) to the University of Oxford and stages across the world, you will bask in nostalgia, laugh your guts out, feel your heart ache, and find a new lens with which to look at your own life.

A lens that allows you, like Papa CJ, to always see the positive.

When asked about the USP of a stand-up comedian, Papa CJ said, “it is different for different people. The thick skin and zero self-respect are the one common thing of every stand-up comedian. But in case of USP, initially when you start you are trying to please everybody then you start doing political stuff, you start using bad language, you want to be seen as an edgy comedian but eventually you will have to find your own voice and do what works for you. You do not need to care about the audience the audience will find you. You just need to be authentic and be yourself.”

When asked what made a stand-up comedian write a book, he said, “I had zero motivation for writing this book. People have two reasons behind writing a book, either it is for money or there is a story within you which you are dying to tell.  I anyways tell my story through stand-up comedy and the contract was lying on my table from last two years and I was not ready to sign it at all but finally I agreed to do so because unlike stand-up comedy, now in stand-up as a comedian we remove every single extra word because we need to get to the punch line as soon as possible but in a book that medium allows you the luxury of telling us a longer story of giving in so many more details which make it a richer and more interesting experience for the reader. So, that was something which attracted me to write a book.”

Just for the records, Papa CJ has won awards for both Asia and India’s Best Stand-up Comedian.

He has performed over 2000 shows in 25 countries and has had numerous appearances on NBC, BBC, Comedy Central, Showtime, MTV, Paramount, The Comedy Channel, ITV and a host of other international networks.

He is the only Indian Comedian to have shot his own solo special with Comedy Central Asia.

Forbes Magazine called his ‘the global face of Indian Stand-up’ and Toastmaster International called him one of the most influential comedians around the world.

He has taped a Showtime USA stand-up comedy special with Russell Peters, and on the American TV show Last Comic Standing, he was placed in the top 10 from over 3000 contestants across the world.