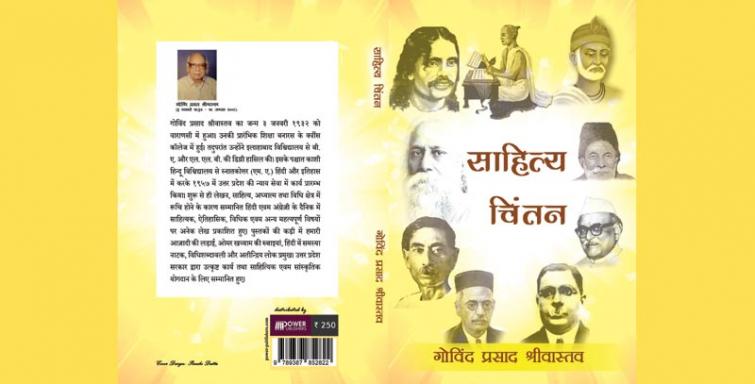 In a conversation with India Blooms, Anand Srivastava talks about his late father, author and a former judge, Govind Prasad Srivastava

Congratulations on the release of  'Sahitya Chintan' written by your father, late Govind Prasad Srivastava. What is the feedback from your friends and readers who have already read the book?

The book release event at Nagiri Pracharini Sabha was well attended by its senior members and respectable figures from Varanasi's art and literaray circle.

Professor Shradhanand, who heads the university's Hindi department, spoke at length on the book and elaborated on some of the chapters on Kabir and Tulasi, and also discussed Acharya Ram Chandra Shukla's writings on Tulasi and his influence on my father.

He also praised my father's attempt to save the lyrical soul of Hindi poetry by putting the critiques in the place where they belong.

Padamshree Prof Rajeshawar Acharya praised his style of writing in simple Hindi with clear interpretations and also delving into the history of any story, thus bringing difficult subjects within the grasp of ordinary people in a very interesting way.

A portrait of my father was also unveiled at this occasion in Sabha's hall.

What kind of books inspired him as a writer? Who were the favorite authors and poets of your father?

My father read widely on literature, law, history, religion and philosophy and most of his writings were a reflection of this large field of interest.

He also wrote Poetry and Geet (in Hindi) and had personally known Mahadevi Verma, Ramdhari Singn Dinkar, Sumitra Nandan Pant, and  Harivansh Rai Bacchan and other great writers of his time, and their writings inspired him too. I saw him reading Complete Works of Vivekanand many times.

I cannot answer this question on his behalf. I think it was a matter of choice and personal interest. In his case, he worked all his life in the judiciary (being a Judge) and only after his retirement he chose to write in a big way.

What are you doing to let readers know about this book?

I am trying to get his unpublished works published first. And I am thankful to Power Publishers for helping me accomplish some of his dreams.

His writings on important subjects are in simple Hindi- which is very helpful for the masses. I wish I had more time to publicise his writings but being away from India is not very helpful. I hope Power Publishers will be able to help me in expanding the reach of two of his books (Hamari Azadi Ki Ladai, published in 2018, and now Sahitya Chintan).

There are at least two more books to come in near future and I will start working on them. I wish I had more time and some technical support while working on these projects..

Tell us something about the book. Some highlights.

The book Sahitya Chintan covers important span of evolution of Hindi as a language and how some of its illustrious writers and proponent have worked tirelessly in very difficult circumstances to establish it as a modern language in India.

Please remember that India was under British rule when these writers were working to develop Hindi as a language and promoting it as a language for the masses.

The chapters on Bhartendu Harishchandra (who is considered Father of Modern Hindi literature), Shyam Sunder Das, Premchand and Ram Chandra Shukla are very interesting read in this regard.

Interestingly, the book also has a chapter on Mirza Ghalib, his writings, and how it influenced some of the great minds who followed in time.

An important chapter on Rabindra Nath Tagore mentions about his contribution in promoting Hindi at Shantiniketan.

It also has two chapters (included as supplement) on Hindi poetry and drama/theatre where he has expressed his own views on both.

Tell us something about him and his background.

My father, Shri Govind Prasad Srivastava, was very a special person to me and to many of his family and friends. He was a Maneeshi (who had wisdom to think and crystallise the essence of a difficult subject) with a spiritual bent of mind.

His professional area was law but he delved into many different fields of interests like literature, history, religion and philosophy.

Although born in a rich family of Banaras, he still decided to work in judicial services where the salary was not much in those times.

He was a prolific writer and had profound knowledge of many subjects he wrote on; and though very honest and strict in his job as a Judge, he was very kind hearted. I wish he was around to see his writings published.