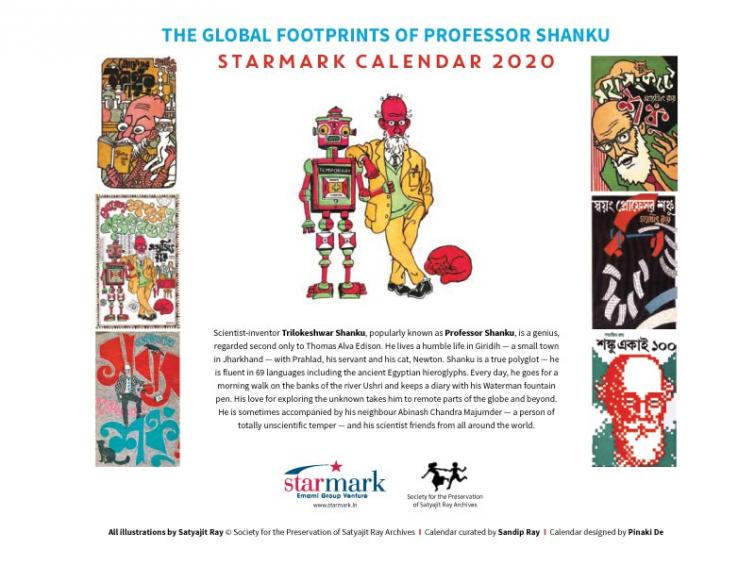 Kolkata/IBNS: The Starmark 2020 calendar- The Global Footprints of Professor Shanku— with brief details and Satyajit Ray’s own illustrations, covers Professor Shanku’s adventures not only in his hometown Giridih, but also in the many distant places where his love for exploring the unknown takes him… the Amazon rainforests, Congo, Egypt, Tibet, Germany, Switzerland, Austria, Norway, Bolivia, Chile, the Sahara and Taklamakan deserts, the underwater world near Gopalpur on the Bay of Bengal, and even some mysterious, imaginary islands which were often the subjects of his dreams.

He lives a humble life in Giridih – a small town in Jharkhand – with his servant Prahlad, and his pet cat Newton. Shanku is a true polyglot – he is fluent in 69 languages including the ancient Egyptian hieroglyphs. Every day, he goes for a morning walk on the banks of the river Ushri and keeps a diary with his Waterman fountain pen.

His love for exploring the unknown takes him to remote parts of the globe and beyond. He is sometimes accompanied by his neighbour Abinash Chandra Majumder – a person of totally unscientific temper – and his scientist friends from all around the world.

The calendar, a publication of Starmark, has been curated by Sandip Ray and designed by Pinaki De.

The calendar will be released by Sandip Ray, Dhritiman Chaterji and  Subhahis Mukherjee at Starmark, South City Mall. It is priced at Rs. 295/- and will be available at all the Starmark outlets.