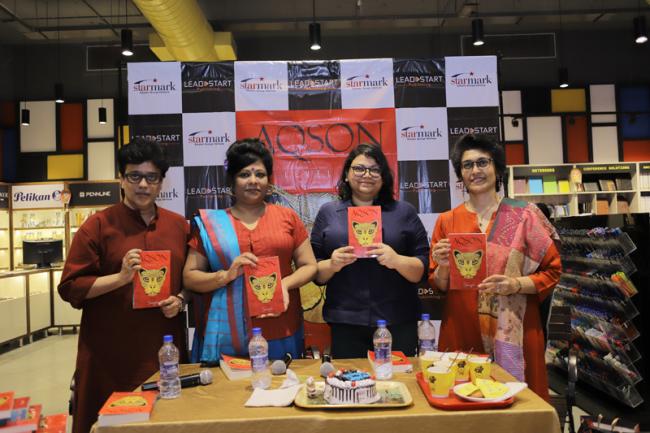 I do not think there is a difference between reality and fantasy: Sreejib

Koel Ganguly, writing under the pen name of Sreejib, released her first book ‘Aqson Level 1’ recently in Kolkata. IBNS correspondent Tirna Chatterjee catches up with her.

Tell us a little bit about yourself, how you got into writing?

I hold a Master's degree in Mass Communication, and I have been working on content development for some time now. I started writing this book in 2013 and then I stopped. It takes a lot of discipline to complete a novel, which I lacked at that time, so I stopped. Then I lost my husband in 2014 and he wanted me to complete this book and get it published so that is how this book happened.

‘Aqson Level 1’ is described as an urban fantasy; can you briefly describe the story?

This is your first book, why did you choose a subject like this to begin your writing career with?

This story has stayed with me for a long time. I read a lot about Lucifer and the character stayed with me and then I read about ‘Pandora’s Box’, if you go through the book you will know I have put together all this character that has stayed with me and being a Bengali, we grow up with cricket and football so game was a very essential part of my childhood so I decided to write about and same with politics, we always criticize and talk about politics, so basically whatever I grew up with I tried to incorporate in this book.

Your pen name is ‘Sreejib’, what is the story behind the name?

As I said my husband wanted me to get this book published, his name his Sreejib so I published the book in his name.

By showing this game between God and Lucifer what exactly are you trying to show?

There has always been this eternal conflict between good and evil, what happens if God isn’t as good as he is portrayed or Lucifer isn’t as malevolent as he is shown, there is always this possibility, no one is black or white, every human being has a shade of grey in them. Through this book I try to explore the grey areas of the human mind. The political backdrop is a commentary on the current social and political scenario of the country. Through this urban fantasy I express my opinion on what is going on in today’s world.

If God and Lucifer interchange some of their qualities, who will you support in the game?

There was a line that I read in the book ‘Paradise Lost’, where Lucifer says, “Better to reign in hell than to serve in heaven”, this has stayed with me, I think it’s a very strong statement and that is why I chose Lucifer as one the players, I don’t know who I support but Lucifer is a very interesting and complex character to work with.

Any recent fantasy story book that you read and liked?

I read a lot of Shirshendu Mukhopadhyay’s stories and I love them, I grew up reading a lot of them and they are one of my favorites.

As you said through this book you have expressed your views, any current political or social issue that has been bothering you lately?

I feel very strongly about the Rafale deal. That is the one current issue that has been bugging me.

There are such popular fantasies like ‘Game of Thrones’ and ‘Harry Potter’, you yourself said you love those books, then why not situate Aqson in a fantasy world and through that make a comment of the politics of today’s world?

I absolutely love those books, but I personally do not believe that there is a difference between reality and fantasy, I truly that there is a rabbit hole and we might fall down that hole someday and enter the wonderland. I really think that fantasy is around the corner. That is the reason why despite being an urban fantasy, the situations are as real as any other stories.

How many levels are you planning on writing?

There will be four levels of Aqson.

Have you started with the second level, if yes then when are you planning on releasing it?

Yes, I have started with the second level; there is still a lot of work left to be done. Hopefully before next Durga puja it will be done.

What themes will the second level explore?

In the first book, only the first level is won, in level 2 they will get a little more into politics and a lot of fantasy of course.