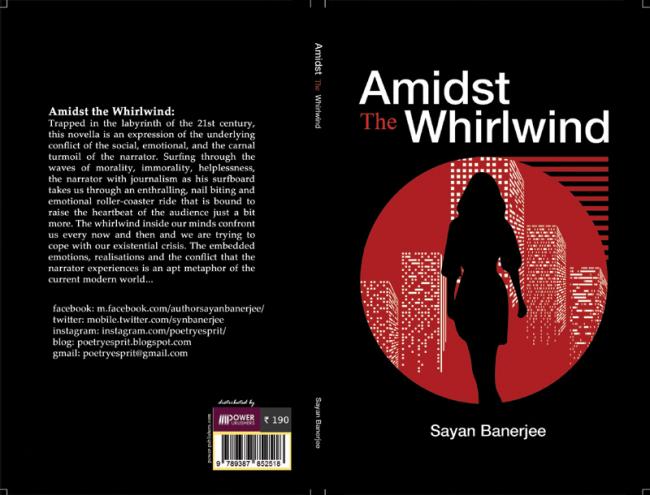 Book review: Amidst the Whirlwind is about relationships and resulting complications

Sayan Banerjee, through his first novel, 'Amidst the Whirlwind', has highlighted the different aspects of a human relationship and how complicated it can get at times.

Man has evolved through the ages and so has the meaning of relationships. Some relationships are distinct, clear and defined; however, others are unnamed, without a proper end because somethings should be left as it is to avoid any further entanglement.

The presence of the narrator can be actively felt from the beginning of the story and the ending is somewhat open-ended, hence the readers are free to imagine what could have happened next and how he would deal with his confused situation? Will his problems and sadness get lost in the whirlwind or will he be able to handle everything? These questions can arise in the minds of the readers while reading this book.

The book commences with a simple yet realistic view of an ordinary Bengali 'para' or neighbourhood. It focuses directly on the house of the narrator and the daily conversations among the family members.

The story commences and concludes with the scenes of rain in the busy city of Kolkata. It may signify something that cleanses the soul and creates an atmosphere of love around or it may also highlight the destructive angle of rain, which is preceded by a storm.

Amidst a storm, most prominently the storm of someone’s life can ruin that person from inside but nobody can figure it out because of the busy outside scenario, where everyone is engaged with their fast-moving lives and hardly anyone cares.

The story sets a romantic mood in the beginning when the narrator sees Ritu, a woman who fascinated him.

The readers, however, will soon come across a twist when Ritu’s life will be unravelled.

Her struggle with life is really challenging since she leads an unhappy marital life and also has a child.

The readers will also be introduced to other characters like Manni, who is very close to the narrator.  However, they share a complicated relationship since the narrator cannot stop fantasizing about Ritu. His feeling towards her is not clear enough but through the descriptions and dialogues composed by the author, some major things can be figured out.

The story-line undergoes several ups and downs and the conclusion is partly left on the readers to analyse.

Each chapter is crisp and is written in simple language so that all can read it without facing problems.

Since, it hits at a major issue of the 21st century relationship, there cannot be a fixed target audience.