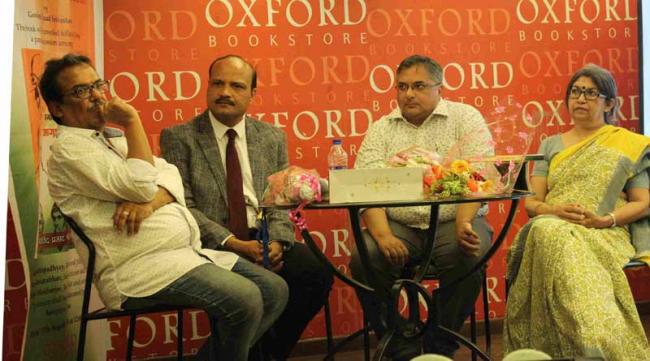 Published by Power Publishers, it was unveiled by filmmaker Aniket Chattopadhyay, author and social activist Sumitra Padmanabhan, and journalist and author Ritwik Mukherjee.

The book talks about the lesser known figures who fought for Indian Independence, whose names usually do not figure in popular history books. The book also chronologically lists the events that took place during the Indian Nationalist Movement.

Dr Srivastava’s sons, Anand and Arvind, said Bengal plays a very crucial part in the book, and therefore Kolkata was chosen as the preferred venue for the unveiling.

"There are three chapters on Bengal. The book deals with the creation of East and West Bengal, that is the reason we decided to launch the book in Kolkata," said Arvind Srivastava.

The sons also spoke about their historian father’s work and read excerpts from the book.

Arvind Srivastava read out a paragraph on the Jallianwala Bagh Massacre and said, “I hope this book conveys the pain endured by the citizens of India during the freedom struggle. Every time I read this book, I get goose-bump. I hope the reader feels similar emotions while reading it.”

Aniket Chattopadhyay said, “After reading the book, I feel the chronological manner in which the book is written is very useful and can easily be used as a reference book. What I feel is lacking is that every author and historian in India fails to talk about the subaltern history. I feel that is the one very necessary thing that Indian authors and historians does not talk about at all.”

Sumitra Padmanabhan said, “We will never realize the struggles our forefathers went through because we were born in independent India. The word ‘azadi’ (freedom) intrigues me, anyone fighting to be free from the shackles of society fascinates me. There is so much we do not know and this book throws a light on those people and events.”

Ritwick Mukherjee who said he was yet to read the bookhope that the book is inclusive as all historical accounts should be.

Arvind Srivastava said initially there was no plan to sell the book. It was a later development.

Pinaki Ghosh from Power Publishers expressed his gratitude for the late author and thanked the sons for ensuring that the book reaches a wider readership.

The book is available at the Oxford bookstore in Kolkata.