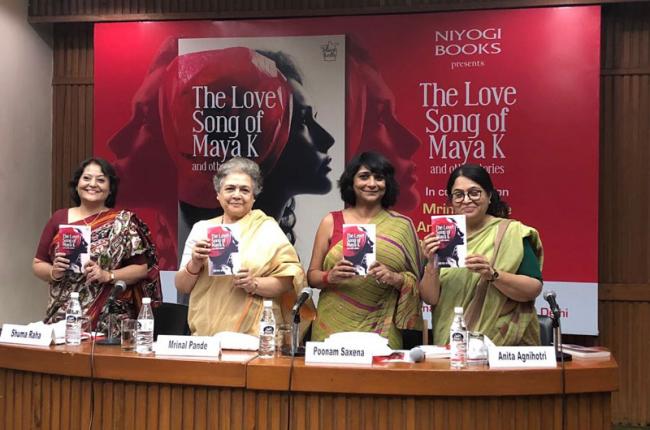 New Delhi, June 15 (IBNS)  “My stories are about people like you and me. They are about love, betrayal, envy, secret resentments, inner conflicts, disenchantment, snobbery … basically the emotions and feelings we experience in our dealings with people and situations.” So said journalist Shuma Raha, speaking at the launch of her debut fiction work, The Love Song of Maya K and Other Stories, at the India International Centre in Delhi recently.

The book was launched by a panel of such luminaries as Mrinal Pande, writer, former Chairperson of Prasar Bharati and Senior Group Editorial Advisor to the National Herald Group; Anita Agnihotri, writer and retired Civil Servant; and Poonam Saxena, writer, translator and National Weekend Editor at Hindustan Times.

Raha, who has been a journalist for over two decades and worked with the The Telegraph and The Times of India, said that most of the stories in the book were set in Kolkata, which is where she comes from, and the rest is set in Delhi, where she now stays.

“The stories are also a reflection of life in contemporary urban India and many of them touch upon social issues such as religious and class conflicts, bigotry, superstition, domestic violence and so on,” said  Raha, who won the Juggernaut Short Story Prize last year.

The author read excerpts from a story called The Kill and also the title story, The Love Song of Maya K, following which, there was an animated discussion between  Raha and the three panelists. 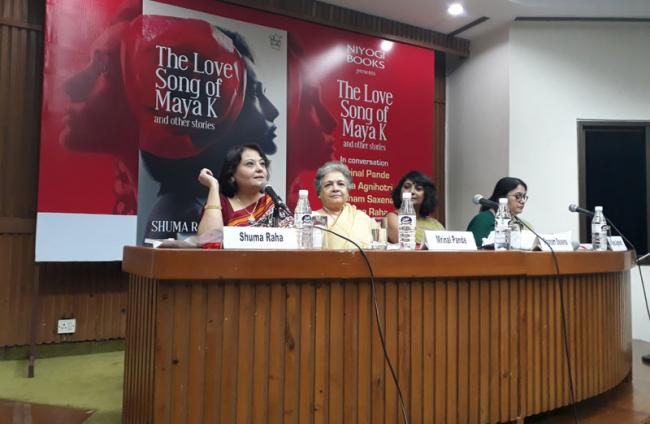 Pande marvelled at the way the author has taken typically Indian themes and situations and expressed them in the English language. And though many of the stories are set in Kolkata, they could as easily have been set in any other Indian city, she felt.

For example, a story called Saturn’s Ring, where a girl is demonised because the planet Saturn is in a malefic position in her horoscope, could have taken place anywhere in India, Pande said. The story also highlights the common Indian obsession with fair skin.

Recommending the book warmly,  Saxena said, “I read it almost at one sitting. And let me tell you that is a pretty remarkable thing these days. And as I was reading it, I kept telling myself, ‘yes, that’s exactly how it is. That’s exactly it!’ ”

Agnihotri complimented the author on her power of observation, taking special note of her descriptions of nature and the way she expresses the inner conflicts of her characters.

Raha said that she probably owes her observant eye to her journalistic profession. “As a journalist, I am trained to observe, absorb and report,” she said. To which  Agnihotri said that not all observations translate into literary expression and in this, the author has succeeded admirably.

Pande remarked that in many of the stories there is a strong sense of shifting sands, of homelessness, of lives in flux.

Agreeing with Pande, the author said that she was very conscious of the contrast between illusion and reality and that a lot of stories are explorations of the instability of relationships and situations.

In the “open house” that followed after the discussion, the author was asked, among other things, if her next project would be a novel. “Yes, I would like to write a novel,” she replied. “Though at present it is still a glimmer in my head.”

The Love Song of Maya K and Other Stories
By Shuma Raha
Publisher: Niyogi Books
Price: Rs 395
To buy on Amazon: bit.ly/MayaK