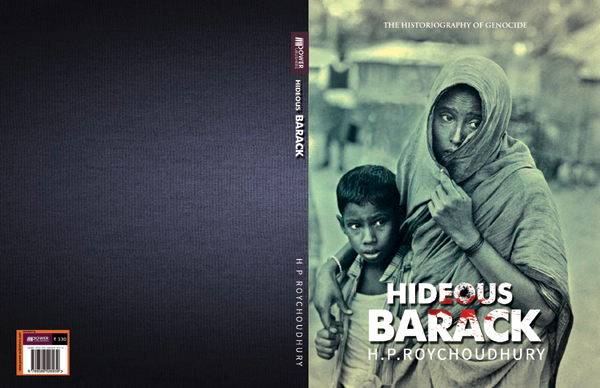 ‘Hideous Barack’ is a historical non fiction book written by H.P.  Roychoudhury. It mainly focuses on the Barak (also spelled as Barack) valley, focusing on the region from pre-Independence to the present, as well as discussing about the future.

It’s a book of undeniable depth and knowledge.

The author has gone into candid and minute details. It is like a mirror showing the truth.

Some of the details in the book will even shock the most sturdy.

Usually, history is taught in our schools in a very generalized manner, often a glorification of people. But rarely are we told about the dark side of history.

This book is like an eye opener, a rude awakening. A book that makes you question Gandhiji’s work as a ‘freedom fighter’, a book  that shakes your faith from its very foundation.

Although the book focuses on the Barak valley, the narration links the region with the happenings around the country before and after independence.

The book touches upon topics such as the Sepoy Mutiny, formation of the Indian National Congress, role of Gandhiji in Hindu-Muslim riots and the Partition of India, the dark side of the leaders, India's first Prime Minister Jawaharlal Nehru, and the aftermath of British rule in India - especially on Assam, the Barak Valley.

The book also throws light on the origin of Muslim religion in Bengal, the effect of China and the greater India’s relation with Bengali people.

It winds up with the story of how Barak Valley, such a tiny region of such a big country, played a major role in bringing back Hindu-Muslim unity after the Partition of India.


A must read for people who are interested in history and want to know more about the Barak region.