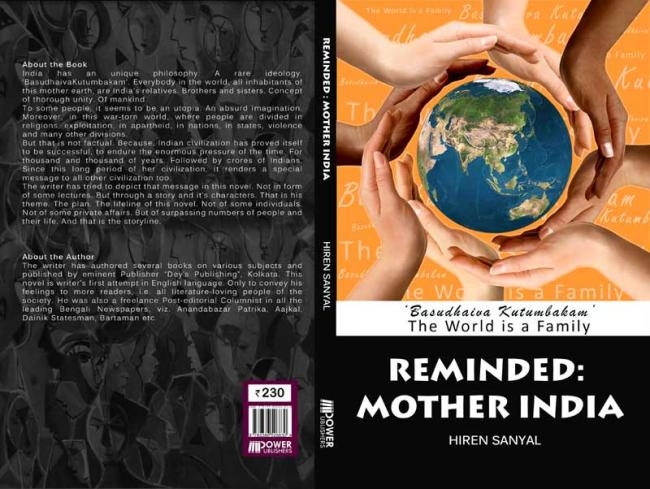 Book review: â€˜REMINDED: Mother Indiaâ€™ is like an emotional roller-coaster

‘REMINDED: Mother India’ written by Hiren Sanyal is an emotional roller-coaster.  It tells the story of a boy named Shanu Roy, an ordinary boy but an extraordinary character.

The story starts with an unforgettable event in Shanu’s childhood, the day when he lost the person who was most precious to him. The day he started feeling numb.

His hatred for his father increased while his grand ma Snehalata Roy, Anu masi and Damu dada held him through the storm that was uprooting his life.

Next we see him as a grown up responsible and cultured person. At the end. we all feel sympathy for him as he loses the girl he loved the most and afterwards his grandma too.

At last he leaves his house to find i there is any positivity left in this world after getting tired of fighting with greedy monsters with human faces.

The characters make the story so powerful. Specially characters like Bina Roy who is Shanu’s mother and Shehalata Roy show the strength of womanhood and motherhood.

The other characters has also been painted very precisely whether it ise a negative character, a positive character or a supporting character.

The book  has also  highlighted the power that the public holds. The common man is like a dormant volcano, once the pressure on humanity becomes too much, there is an outburst, an explosion that can destroy everything to uphold humanity.

It is a book which compels you to feel every emotion like helplessness, sadness, frustration, anger, love and even the feeling of being completely numb.

We ourselves get confused that how should we feel about certain things. The story is what happens in real life every day- the powerful people exploiting the weaker class, the majority of common people.

The flow of the book makes it an absolute page turner. A book that stirs up your heart and a story that stays with you for a long time.