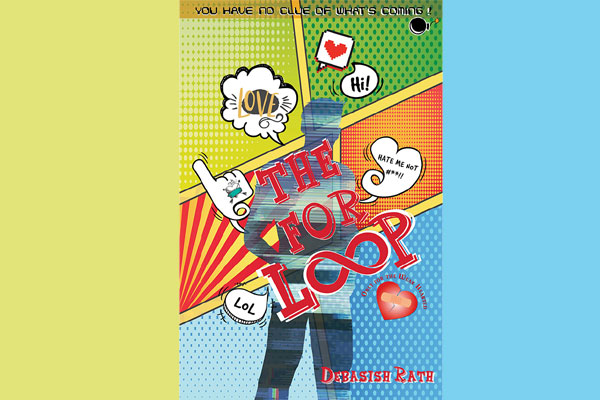 India BloomsNews Service | | 26 Jul 2017, 06:03 pm
#The ForLoop, # DebasishRath, # PowerPublishers
Men and women come from different planets is a remark we often hear in the context of difference in gender personality traits. But the latest novel by Debasish Rath titled, â€œThe For Loopâ€ puts a big question mark at the end of this remark.

But here is a really funny, cute story about a sweet, decent fellow who always turns out unlucky in love.

And yet all that he wants is a stable relationship that is defined by love and faith. But that is not to be, it seems.

Here is a man who you can’t stop adoring.

This novel begins with a bang, with the protagonist, Dev, being thrust into a situation that alters his life forever, setting him afloat on a course that leads him towards his destiny, for good or for worse that is for the readers to find out.

Talking about either of these plot points would just spoil the story for the readers.

The readers need to read the book and solve the mystery for themselves.

Yeah, the only thing I can say safely is that cinema and the literary media are so intricately interconnected that an idea taken from one medium can nourish and hone the other media so beautifully and creatively.

And this connection is always a joy to behold for all movie-buffs and book lovers over the world.

Why I am saying this? Well, you have to read the book to understand what I mean here.

So what I can talk about here, without the fear of revealing anything, is just the middle portion of the story.

Dev is a regular, middle-class, school going kid who has just started noticing girls and his over-imagination makes him fall for a girl in his class.

He is too scared to approach her on his own and he seeks help from a common friend, Tania.

And it is Tania who comes into his life as a hurricane in the due course of time.

I won’t discuss their dynamics here.

Through the entire length of the story we see Dev blundering his way through one failed relationship after another.

He survives through them and finds himself. Yet he never stops hoping for a better future.

Dev is just such a humane character. Aren’t we all like Dev, in odd ways?

The readers can laugh at Dev’s misfortunes, his idiocy and yet at the same time they are forced to fall in love with him just a tiny bit more.

Dev makes mistakes but the readers will never hold the mistakes against him because making mistakes is just a part of growing up.

So, to conclude, just get your copy of the book and fall in love with Dev.

The book is now available at amazon, flipkart, ebay snapdeal, shopclues. The price of the book is Rs 140.