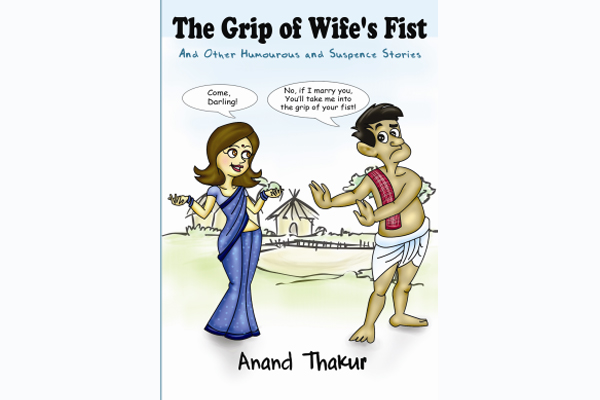 The Grip of Wife's Fist: A humorous look at social mores

India Blooms News Service | | 24 May 2017, 06:09 pm
#TheGripofWifesFist, # PowerPublishers, # IndianWritinginEnglish
Kolkata, May 24 (IBNS): 'The Grip of Wifeâ€™s Fist', written by Anand Thakur and published by Power Publishers, is a welcome read in an angst-ridden world

Originally written in Marathi and later translated into English by the author himself, 'The Grip of Wife’s Fist' is a collection of ten short stories which can be best described as interesting and humorous and quirky.

The book starts with the story that is called “Difficulty”.

This rib-tickling story is about a woman bank employee whose boy friend holds a much lower position than her's in the same bank. So it hurts her ego to marry a man who earns less than her.

She forces him to sit for an internal competitive exam for a higher post.

The story maybe funny but it draws our attention towards an unjust practice in our society.

Here, in this age of feminism, we are hankering for equality between men and women.

And yet, when it comes to marriage, the man has to show his pay-slip to his prospective in-laws to prove his worth, while the woman is exempt from this scrutiny.

A man’s worth is still measured in terms of his earning capabilities.

When we want to create equality between the two genders then shouldn’t the woman be checked out on this parameter as well? Why should the man be expected to earn more?

The author has deftly brought focus on this all-important question with his humorous take on the matter.

Another interesting story is “Destiny”. It is about a young woman, who is having certain issues with her boyfriend.
One fine day she bumps into a stranger who claims to have the ability to predict a person’s past, present, and future just by looking at his or her face.

She gets scared because his predictions were turning out to be true!

Astrologers and palm-readers have been an integral part of our culture. But is it really a healthy thing to know our future?

Does it make us more prepared? Does it really arm us for the inevitable battle? Can we really fight our destinies?
This story raises such questions and entertains at the same time.

The other stories that are worth mentioning would be “The Grip of Wife’s Fist” and “Twitter Tatter”.

All the stories here are based on different subjects but remain connected through a sense of inherent humour.