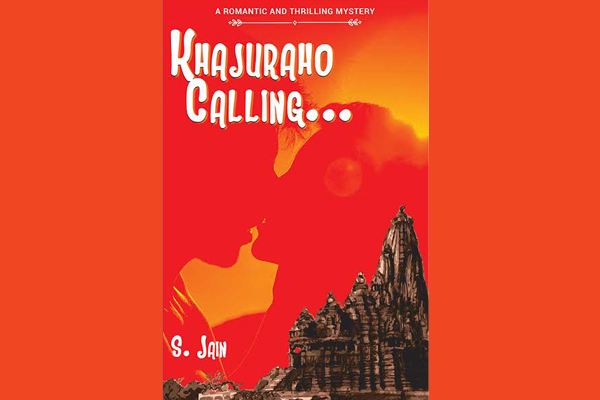 India Blooms News Service | | 10 May 2017, 06:03 pm
#KhajurahoCalling, # SJain, # PowerPublishers, # TalesofReincarnation, # RomanticThriller
Move over Chetan Bhagat and Durjoy Datta. Women are no less clever in penning romantic tales. If you ask me, women do mushy romance way better than men as the book Khajuraho Calling is sure to prove.

And i won't be surprised if some Bollywood director grabs Khajuraho Calling penned by S Jain to make a blockbuster.

Khajuraho Calling has all the elements of a Bollywood movie -- romance, passion, mystery and exciting twists. To me, the book screams Bollywood from the very word go.

There is a rich, handsome, successful guy that every young girl would love to dream about. Then there is a beautiful but mysterious woman whom men love and women find inspiration from.

Two perfect characters who entice readers into the world of sculptures and history.

Interestingly, both have identical scar marks on their backs. But neither of them suffered any injuries to give them such lasting scar marks.

So what is it?

It is a tale of reincarnation.

To be fair, reincarnation tales are tried and tested stuff. What’s new about them one might question.

But here is a story that is so gripping that you soon forget that it is a hackneyed idea.

The story moves so fast that it becomes unputdownable.

And despite the pace, the narration is so gripping and vivid that you can feel every emotion, every suspense that gets played out in the story.

It is almost possible to live and breathe with the characters as they journey onward.

Now coming to the part that makes this story so irresistible—as I started reading the story and came to the part about the scars and the indefinable attraction that Shiv felt for this mysterious woman.

I was dying to peek at the conclusion to know the history of the scars that the two lead characters bear on their bodies.

Rudra, the artist travels to Khajuraho with his best friend, Abhay and they both get hired to work there.

Rudra stumbles into Mohini and rescues her.

Rudra shelters Mohini, ultimately falling in love with her.

The story, the premise, the idea and executions are so dramatic that it will hold the readers' attention throughout the novel.

Honestly speaking, there’s nothing intellectual about this story; it won't send you on any soul-searching trips.

But what this story will definitely do is send you on a pleasure trip where you can just lose yourself in a world of passion, romance, suspense and excitement.