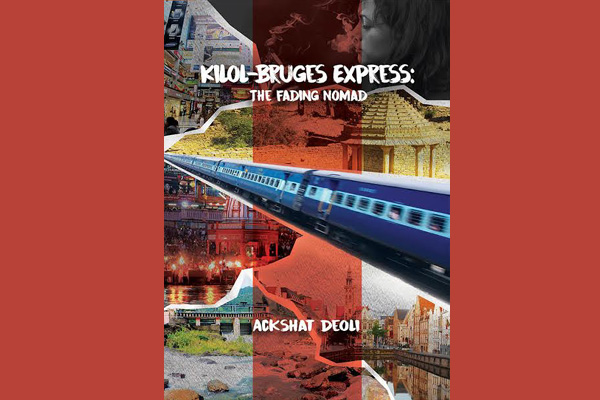 India Blooms News Service | | 01 May 2017, 05:41 pm
#KilolBrugesExpress, # AckshatDeoli, # PowerPublishers
Kilol-Bruges Express: The Fading Nomad from Power Publishers, which hit the online stores a few weeks ago, has somewhat of a picaresque quality about it with an uncanny supernatural twist.

The path to fame or freedom passes through the tumultuous sea of struggle, loss and miseries.

Following her mother’s death, Chikki moves out of the small town of Kilol at the tender age of 17.

She ventures out in the big city, has her share of experiences with life, romance and betrayal, before she ends up in the lap of Bruges where she finally encounters the climactic crest of her life.

Years later she shares the journey that led to her successful stint as a writer-director with an ambitious reporter.

The narrative is simple and author Ackshat Deoli does not complicate his mission by infusing unnecessary plot points for ornamentation reasons.

Though a few characters like that of Chikki, Joe and Max have got layers that have been explored alongside the narrative, the characters of Rahul and Jason has been mostly left under-baked.

However, character exploration do not really appear as Deoli’s main motive in the story. It is the romance of the journey from poverty to opulence, faithlessness to confidence in one’s self and eventually from death to life, that really grabs the spotlight.

Chikki, is like the dreamer in you. A volcano of raw potential juts out from her being at the sight of a single opportunity.

She is street-smart and yet has an innate innocence about her that makes her ask her mom, if she is married to Lord Krishna too, since she worships him as much she worships her abusive husband.

At the sexual prime of her age, she does not let the doubts of the male nature of infidelity and dominance, stop her from experiencing carnal pleasure with the man she loves.

But Chikki does not only dwell in the black-and-whites of life.

She embodies human folly and the very nature of humans to seduce certain moments into their lives, just for the sake of momentary pleasure or for simply satisfying their ego.

Hurt by her husband’s infidelity, she does not fear to brush her hand on a man’s thigh and then shun him the next moment when he tries to be intimate with her.

In a few words, Kilol-Bruges Express: The Fading Nomad by Ackshat Deoli is one of the few books that tend to stay with you, long after you push it back into the shelf.

Priced at Rs 180, the book is fast flying off the shelves, days into its release. You can order a copy from http://power-publishers.com, http://amazon.com, http://flipkart.com and http://ebay.in.