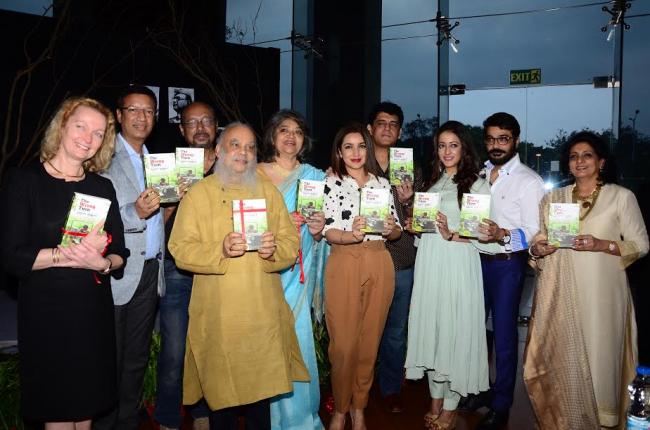 The event was hosted by Prabha Khaitan Foundation and Hyatt Regency.

"It is a very interesting book which is based on thorough research. Unlike the popular historical narrative of the British, the book tells us much from the Indian standpoint about INA and also raises many questions," said Namit Bajoria, Founder Trustee of Kutchina Foundation, who welcomed the guests.

Popular Bollywood actress, Tisca Chopra, engaged in an engrossing tête-à-tête with the authors covering various aspects of the book and their effort to present an Indian point-of-view of a decisive event in our history which has mostly been told to us from a British perspective.

Special guests Anjan Dutta and Raima Sen read out excerpts from the book.

The book, published by Om Books International, is a saga of love and betrayal in the backdrop of a very momentous and decisive phase of Indian history when Netaji’s Indian National Army (INA) began to advance from the North East to free India from the British.

Considered a turning point in India’s freedom struggle, the book throws up many questions - What turned the tables? Was it the British and their manipulation? Was it that old Indian curse - betrayal? Someone from within Netaji's own ranks? Were there other forces, waiting in the shadows, closer to home, who stood to gain even more from the INA's defeat? Or was it that old culprit, love, that irrevocably changed the course of India's destiny?

Seventy years later, the British admit that the twin Battles of Kohima and Imphal with the INA were the greatest battle they had ever fought - even more so than the battles of Waterloo and Dunkirk.

The Wrong Turn: Love and Betrayal in the Time of Netaji, a novel by Namita Roy Ghose and Sanjay Chopra, is a sweeping tale of passion set against the freedom struggle. Debraj, the rakish playboy and scion of a distinguished Calcutta family, and Nishonko, the fiery revolutionary sworn to the cause of the INA, must not only fight their common enemy, but also for the love of Aditi, the rebel with the healing touch. A haunting tale of love, friendship and betrayal of an entire nation, The Wrong Turn veers inexorably towards a poignant redemption.

Namita Roy Ghose is an acclaimed film director and advertising luminary and a script / screenplay writer.

“This was a story waiting to be told. So much about Netaji was smoke and mirrors, partial views foisted on us by the British and other vested interests. Here was a man who was a personal hero, who was part of the lore of my childhood. And here was a chance to set the narrative straight - through the lens of a very human yet universal story of love,” she says.

Sanjay Chopra is an airline pilot and author of two collections of short stories Said and Done and Tailspin stories. He believes that his office at forty thousand feet in the sky and his travels provide him with a view that fuels his vivid storytelling that cuts a wide arc through time and space .

His stories have won the Invisible Ink, the Millennium writers and Southport awards in the UK and USA. In the words of his readers, ‘He is a storyteller like those of the old days, yet his stories are as modern as tomorrow.

He lives in Mumbai with his wife Tisca Chopra, an actress and he is currently working on a film script and a web series.

“The Wrong Turn is a story that traverses the cities of Calcutta, Singapore, Rangoon and Kohima caught up in the blaze of the Second World War. It is about the clash of four desperate forces as they come together in Kohima to vie for the brightest jewel in the crown -- India. Victory will come to those who possess not just the coldest steel but even colder hearts,” he says