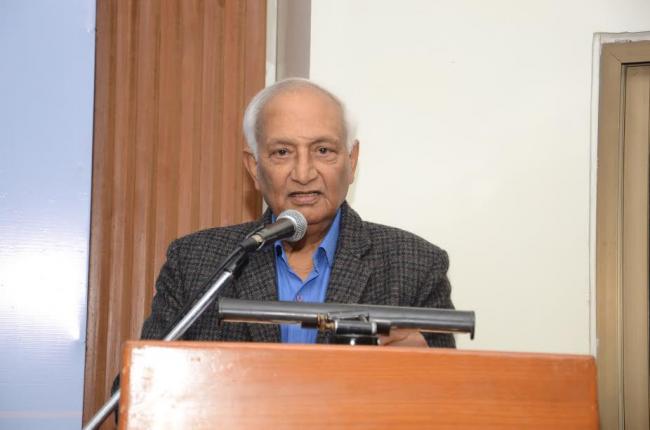 India Blooms News Service | | 25 Jan 2017, 04:06 pm
#The White Marble Burzi and Other Stories, #Sharat Kumar, #DelhiUniversity
New Delhi, Jan 25 (IBNS): â€˜The White Marble Burzi and Other Storiesâ€™ by Sharat Kumar is a book for today's young adult readers as it speaks of relationships in life through simple stories of simple people, said Dr. Nirmala Jain, an eminent Hindi writer and former head of Hindi Department, Delhi University who was the Chief Guest at the book's unveiling recently in Delhi.

Kumar, known for his novels Orange Moon and Farewell Red Mansion, served in the Indian Navy until 1966, after graduating from the National Defence Academy in 1956.

He then pursued a career in management and was the Director of IMT Ghaziabad. His book ‘Mind your Management’ won the Best Management Book Award of NTPC-DMA.

Kumar said that he is inspired to write fiction because it is a work of fiction that teaches us about emotions. "Our formal education system caters only to the development of intelligence. We learn about emotions unconsciously, silently, through fictions," said Kumar.

Dr. Sonal Parmar, Editorial Consultant, National School of Drama, has described ‘The White Marble Burzi and Other Stories’ as a collection of short stories portraying "an assimilation of ideas, characters and language. It makes one embark on a journey that is thought-provoking, beautiful and real, all at the same time, and leaves one feeling both fulfilled yet hoping for more."

“It is a good attempt to understand complex relationship of man and woman in life. One may buy everything with money but not a good relationship. It is priceless and thus needs to be protected and nourished,” said Shashiprabha Tiwari, a senior media critic.

Said Dr. Satinder Bajaj, former director of Lady Irwin College, “It is interesting to note that his stories portray women as attractive and intelligent characters. However, this combination makes life difficult for them. That is why, female characters disappear in the end. As one of the stories rightly says that men can tolerate, even admire, a woman with beauty or intelligence, but not a woman who has both!” 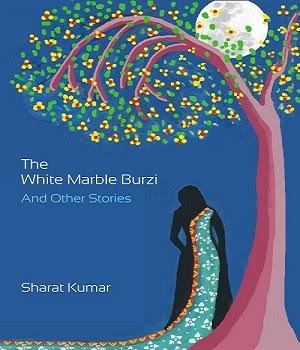 "The writer never restricts himself to one kind of interaction but explores deeper and deeper to find a commonality between all relationships. He introspects on marriage in In Retrospect, and muses on the many layered narratives of a parent-child dynamic and ageing in My Life and The Return Journey, the thrilling solitude of new love in The Affair, the relationship with oneself in Saturday, Sunday and so on," remarked Arijeet Mondal, PhD (literature) scholar, University of Delhi.

Kumar's first novel ‘ShikharaurSeemayen’, based on his one year stay in Sikkim in 1963, won the literary award of the Delhi Hindi Academy. It was later translated in English as ‘Orange Moon’. A pocket book edition was also published in USA.

His Hindi novel, ‘LalKothiAlvida’, which was translated and published in English as ‘Farewell Red Mansion’, was made into a 82-episode TV serial and telecast on prime-time Doordarshan. Thereafter, he directed a full-length feature film, Duvidha, based on this novel. This art film received Certificates of Special Merit at the International Film Festivals at Strasbourg and Philadelphia.

‘The White Marble Burzi and Other Stories’, a compilation of 13 short stories, is published by Aakar Books