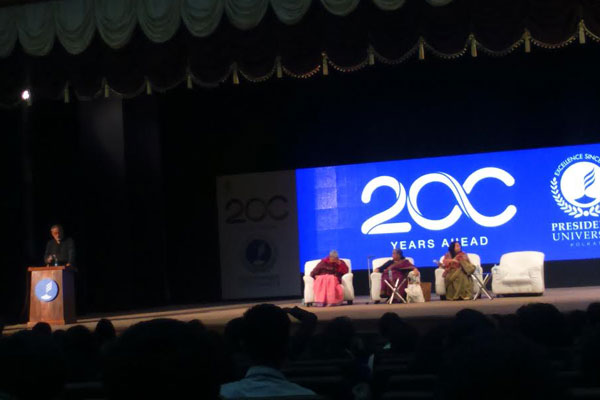 This and other interesting bits about Mahasweta Devi's life and writings came to light at the Apeejay Kolkata Literary Festival (AKLF), which concludes on Wednesday.

Spivak said: ”Mahasweta’s writings have always been somewhat extraordinary. There was such a ring of sincerity in her expressions about society."

“She despised casteism. She boldly protested against the SC/ST violence but those discourses never turned her into a political pamphleteer,” said Spivak.

"Nonsense literature has been an integral part of Mahasweta Devi’s writing. She had a wild and varied imagination of absurd content in her stock,” said Nabneeta Dev Sen.

Writing for children, Mahasweta Devi was a different person, a fun writer, said Dev Sen and read out from a children's story featuring a humorous character named ‘Nedosh’ to prove her point.

Naveen Kishore commented on the pain and passion of Mahasweta’s life.

He described how she was frustrated by the daily injustices meted out to people, the disregard to basic human rights, the disparity in treatment towards men and women.

According to Naveen Kishore, the late author didn't find the independence of the country quite real. She would often ponder aabout building a culture that would be widely accepted across the country, cutting across regional divides.

The session ended with the screening of a documentary film titled ‘Talking Writing: Four Conversations with Mahasweta Devi’.

Through the film, the audience realised the discomforts of her personal life; how, despite all hardships and challenges, she built a strong writing career, and became a social activist.

It was in one of the interviews that Mahasweta Devi pointed out that people should be allowed to dream, it is should be one of the fundamental rights.

Talking about the making of the film, Naveen Kishore said: ”When the shooting of the film was going on, the camera was placed right in front of Mahasweta Devi. But the setting did not seem right, there was a sense of artificial ambience. So we decided to hide the camera to bring back the genuineness of the environment and allow Mahasweta Devi to speak in a free flowing manner."

The sesion was moderated by Anjum Katyal, who had worked closely with Mahasweta Devi on social and cultural issues.